The Abkhaz no longer need their own land - the consequences of separatism. 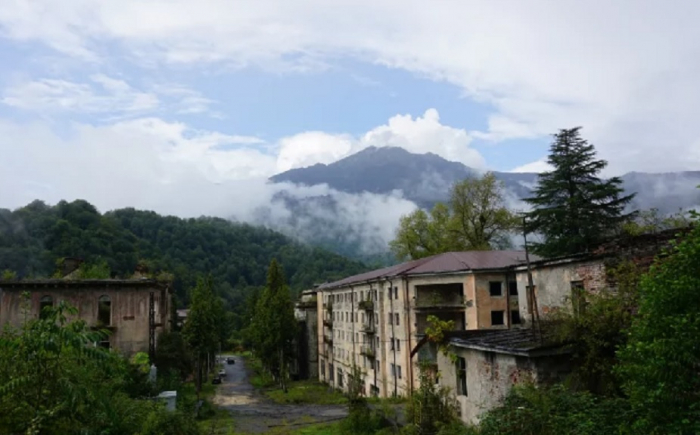 What separatist regime and occupation has turned Abkhazia into, and most importantly, what awaits it if the current trends continue, cannot but cause alarm for the future of Abkhazians as a people. A paradox arises - a people that was seduced and set upon by the separatists against their Georgian brothers over the land, which became a fetish "motherland", is no longer needed. And Abkhazians in some places just throw it away, and in others sell it to outsiders, despite the fact that, according to the separatist laws, such things seem not yet allowed.

But everyone understands that it is not the separatists that determine laws, but occupants. And they have already made it clear that investment in Abkhazia (and maintenance of the regime) will depend on permission to buy land and real estate. And the puppet "president" Aslan Bzhania is already campaigning to sell land to "investors".

Yet first we will talk about how Abkhazians are abandoning their land, their thriving places before the war. We should remember that the mining town of Tkvarcheli was predominantly an Abkhazian town in terms of its ethnic composition. Moreover, the military actions did not directly affect this town.

Nevertheless, Tkvarcheli was in fact abandoned by Abkhazians who were engaged in fratricidal war and expelled their neighbouring Georgians and who later left the town en masse heading to Sukhumi "for trophies".

Here are excerpts from the material "Russian reveals dying region in Abkhazia". (https://sochi24.tv/rossiyanin-pokazal-umirayushhij-kraj-v-abhazii/):

"There are hundreds of abandoned flats around the mountains of Abkhazia, for which people have been queuing up for decades. There were plans to build a real megalopolis here with all the conditions for living, but now only closed coal mines and abandoned cars are left of the former glory. The Russian decided to go to the very edge of the country, to Jantukha. The Russian Secrets blog on Yandex.Zen wrote about what he saw there.

"Generally, because Jantukha is in the mountains, it has a very different climate. For example, in the neighbouring town it may be +26, but here it may well be +15. This is why I purposely brought a warm jacket and tight boots.

But I wasn't really prepared for the rain. The first thing that catches my eye is a lot of abandoned high-rise buildings. It's quite normal for a single family to live in an otherwise large house," he says.

It's hard to imagine, but 30-odd years ago people lived here. Different nationalities lived here in peace and friendship.

Jantukha was part of the network of mining villages that had grown around the big city of Tkvarcheli. The main construction of houses and mines started after the Great Patriotic War. There was everything necessary for a good life: a hotel, a school, a hospital, a restaurant, a small market and even a cinema.

At the end of the 1980s the population of the settlement was about five thousand people. It was indeed a prestigious place to live. After the collapse of the Soviet Union and the Georgian-Abkhazian war that followed, the mines fell into disrepair. People lost their jobs and left their homes. Whereas previously people had been on the waiting list for flats for years, now most of the flats are empty. Only a few families have survived among the derelict blocks of flats.

Apparently, apart from the coal mines, there were also radon baths and a whole sanatorium attached to it, which could accommodate up to 400 people.

I tried to find it on maps and there I saw that everything had been completely destroyed. Sadly, all the infrastructure around, which was intended, has been completely abandoned. The nature all around is just amazing. And you can see how it directly takes over and eats up everything that man has done".

But Tkvarcheli is only the "brightest" example of an empty town in separatist Abkhazia. Meanwhile, dozens of Abkhazian villages, where at best only old people were left, were also deserted. Abkhazian youth moved to Sukhumi and Gagra where they are degrading in conditions of unemployment, rampant crime and drug abuse.

Outside Sukhumi and Gagra and a few places along the coast there is desolation, abandonment and degradation everywhere in Abkhazia. But it seems that it will not be long before Abkhazians own land on the coast too.

There are other claimants, who do not even hide their intentions to "develop" Abkhazia, although some of them do it not directly, but through their "proxy" in Russia. One of these "commissioners" is ex-governor of Krasnodar Krai Alexander Tkachjov, who at the time was a decorative support for the Sukhumi separatists. As it turned out, there was a reason for this.

Recently, a scandal erupted in the separatist Abkhazia because of a statement of ex-governor of Krasnodar Krai and former Russian Minister of Agriculture Alexander Tkachjov. On December 27th 2021, speaking about construction of the hotel and apartment complex Moscow Resort in Pitsunda, he said:

" It' s a unique place, 45 hectares that we managed to acquire, to buy out, and I think the place is worthy of such a project."

However, the ex-governor's words provoked a strong reaction in Abkhazian society, since according to separatist laws while land in Abkhazia is not sold, there is no law allowing the sale of land and real estate to foreigners.

However, the Abkhazians "became angry and calmed down". And Tkachjov "clarified" that he had not yet bought the land, but only leased it. But there is no doubt that the lease will be quickly transferred into ownership as soon as a relevant separatist law appears (which the separatist authorities have already agreed with Russia within the framework of "harmonization of laws").

All the more that Russian Foreign Minister Sergey Lavrov-Kalantarov at the "official meeting" in Sochi with the newly appointed "foreign minister" of the puppet regime of Abkhazia Inal Ardzinba has pointed out to the separatists that "not quite legitimate processes are taking place in Abkhazia with regards to the property of Russian citizens". And according to Lavrov Ardzinba assured the Russian side that the Abkhazian separatist leadership "will do everything possible to close all these issues. That is, in a little while, no one will ask "silly questions" about how Kalantarov's compatriots with Russian or other passports got land in Abkhazia.

Anyway, separatist Abkhazia is becoming a territory where "everything is decided by money". The Abkhazians have no money - in short, no money at all. They are forced to beg for handouts from the occupants. And who has money, power and influence on the Black Sea coast, and whose "wishes" have been fulfilled by Tkachjov? It is clear who has it - the Armenian lobby.

It was under Tkachjov when he was governor of Krasnodar that the Armenians literally seized not just all of Sochi, but the entire Russian Black Sea coastline up to the Kerch Strait. Since the annexation of Crimea, Armenian "appetites" have expanded in its direction; there is a massive buying up and seizure of land by Armenian settlers through forgery and the "displacement" of the indigenous Crimean Tatar population from it.

One would be foolish to think that the many times more intense process of appropriation of lands by the "most ancient people" will not affect separatist Abkhazia. All the more that Armenians have already become a majority here and their number is only growing because of their resettlement from the Republic of Armenia and the abolished separatist "Artsakh".

Abkhazians are abandoning their own land in some places, while in others they are losing theirs. And if there is not the quickest possible reunification of Abkhazia with Georgia and reconciliation with the brotherly Georgian people there are no preconditions for this process of loss of their land by Abkhazians and extinction of the Abkhazian ethnos to stop.