Kazakhstan's explosion that could "demolish" Russia - where was Kalantarov eyeing? 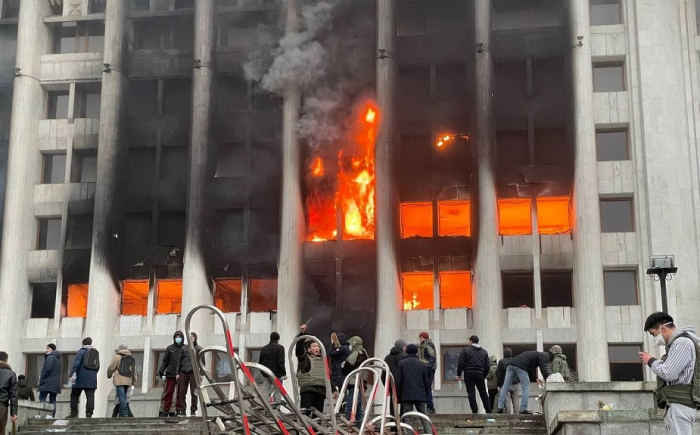 What has yet to be realised and understood is what happens in Kazakhstan.

But the speed with which events are unfolding is astonishing.  As early as January 1, 2022, nothing foretold disaster. Russian propagandists were just rejoicing that gas prices are rising in the world promising super profits to Gazprom. True, by the New Year the price had fallen but remained high.

High world gas prices led to a rise in domestic prices in the gas producing countries. Inside Kazakhstan, the price of liquefied gas also rose, and "innocent" protests began because of it in January. At first, in the 110,000-strong city of Zhanaozen in western Kazakhstan, where just a few hundred local residents initially came out onto the central square. But then, as if on cue, the protests started to spread to more and more cities and regions of the country, and by the 4th of January the economic demands were replaced by political demands - the demands of the resignation of the President and the Government. Clashes broke out.

Overnight, from 4 to 5 January 2022, President Kassym-Jomart Tokayev declared a state of emergency in Almaty and in the west of the country, but it became apparent that the situation was no longer so easy to calm down. Already on the morning of 5 January, the government resigned, but this did not help. On the contrary, it became evident that the government was "letting its guard down", and the country was rapidly descending into "revolutionary" anarchy. The masterminds of the "colored" revolutions can clearly be seen behind it.

Geopolitically for Russia, what is happening in Kazakhstan is a disaster.

Overnight, the eastern borders, which the Russian Empire built up over centuries, and the post-Soviet Russia over 30 years, in fact, kept a system of friendly regimes, fell and turned into a zone of chaos. Not today or tomorrow chaos will spill over the border of Russia. There has never been such a rapid catastrophe in Russian history.

And now let us look at how the "best diplomat of all times" Sergey Lavrov-Kalantarov prevented all this and reacted to it.

Where is Russia's support in Kazakhstan for peace and stability? How many meetings did the Russian foreign minister hold with Central Asian leaders and politicians, and how did he try to assert Russian interests in the region and maintain existing geopolitical plans? How, in the end, did Lavrov react at the sharpest moment of the day - on January 4 and early afternoon of January 5 - to the events in Kazakhstan.  None at all!

Instead of urgently addressing the issue of stability in the Central Asian region that is crucial for the very existence of Russia, Kalantarov met with heads of the puppet separatist so-called "foreign ministries" of Abkhazia and so-called South Ossetia in Sochi in late November 2021. That is, he used his precious working time as head of the foreign office of a great power to support the dwarf separatist entities.

The great Russia has nothing else to do but to deal with "independence" of the separatist regime in Tskhinvali and its surroundings? Where there are at best 15-20 thousand people left... And the result is that Russia can get a "gap" on its eastern borders of almost 8 thousand kilometres in size that it has nothing to "cover".

Here it is, the consequence of the fact that the foreign policy of the nuclear superpower in Russia has been entrusted to the nationalist of "long-suffering", perpetually persecuted by the abused but "ancient people". Who in its maniacal hatred for Georgia that sheltered its ancestors simply has no limits and with all resources and forces of Russia is seeking to dismember and destroy the Georgian state.

And most recently, Sergei Lavrov-Kalantarov was "concerned" about the fate of the separatist entities in eastern Ukraine. In their policy of supporting separatist projects and redrawing of borders Kalantarov and the agency he heads overlooked "tectonic" processes on the eastern borders of Russia, "missed" loss of Russian influence in Central Asia, and thus led Russia into the most critical geopolitical situation in the history of its existence.

And what have the "great Russian patriots" like Zatulin, who are nourished by the Armenian lobby, been doing? They spent so much time and resources on "helping Artsakh" and missed the moment when huge territories in the east are being withdrawn from Russia's influence.

The conclusion is simple - the Armenian nationalists and fodder of the Armenian lobby should be kicked out of government positions in Russia. Before they ruin the country. Tomorrow it may be too late.  Unless, of course, it is already too late today...