Kalantarov hits world Orthodoxy through Africa. The goal is to take Abkhazia and Samachablo away from the Georgian Orthodox Church! 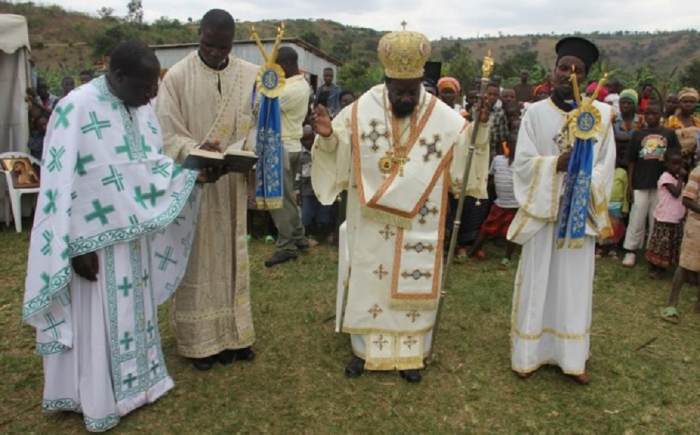 The Armenian lobby in Russia has tried and is currently trying hard to pit the Russian and Georgian orthodox peoples against each other. This is done in order to dismember Georgia with Russian help and eventually to make it an easy prey for the representatives of "the most ancient people" claiming its lands. This, unfortunately, succeeded in some areas. But there is one, the most important, spiritual sphere. Here so far it has not been possible to arrange a complete break between Georgia and Russia.

Sergei Lavrov-Kalantarov, the head of the Russian Foreign Ministry, who is far from both Orthodoxy and basic decency, an Armenian nationalist, is trying very hard in this direction to quarrel with the ROC and the GOC. For example, Kalantarov in October 2018. "pushed through" a representative of the Abkhaz separatists, a "young talent" Inal Ardzinba, bred in the Kremlin's separatist-backed structures. He headed the Public Council for Youth Affairs under the Patriarch Kirill.

But Inal Ardzinba, because of his very modest abilities and his infinite "distance" from Orthodoxy, has not showed himself in any way and he failed the entire work with the youth at the Moscow Patriarchate. We had to appoint him as "promising Abkhazian politician" and send him to Sukhumi to head the separatist so-called "foreign ministry" that was completely dependent on Kalontarov.

However, the next combination of Kalontarov turned out to be much more cunning, multi-movement and destructive to the world Orthodoxy.

"Kavkazplus in "Will Patriarch Kirill protect Georgian Orthodox churches in Armenia?" (http://kavkazplus.com/news.php?id=34352) has already written that by organizing its diocese in the Republic of Armenia without the consent of the Georgian Orthodox Church, the Russian Orthodox Church unilaterally violated an agreement of 1943, under which the Orthodox parishes on the territory of the then Armenian SSR were managed by the GOC. But this was not objected to by the Georgian Patriarchate, since, firstly, the Armenian authorities did not allow Georgian priests on their territories. And secondly, the ROC still recognises Abkhazia and the Tskhinvali region (Samachablo) as canonical territory of the GOC.

However, it turned out to be much more complicated than that and it appears that the opening of the diocese in Yerevan was just the start of the 'big game', which is clearly being directed by Sergey Lavrov-Kalantarov.  On 29 December 2021 the ROC Synod decided to admit to the jurisdiction of the Russian Orthodox Church 102 clerics (priests and deacons) of the Alexandria Patriarchate from eight African countries, according to the petitions submitted.

In fact, the ROC has not only entered a foreign canonical territory, but it has done so completely unreasonably. And the current move by the ROC leadership was clearly made under the influence of Kalantarov and the Armenian lobby, and Armenian figures were directly involved in it. Especially when you consider that Kalanatarov has at his disposal a diplomatic network of the Russian Foreign Ministry, which he inherited from the Soviet Union throughout Africa.

In addition, a significant proportion of African Christians are Egyptian Copts, and almost half the population of Ethiopia and Eritrea are full co-religionists with Armenians and monophysites like them. They, especially the Copts, have long been intriguing against the Orthodox patriarchate of Alexandria. And most importantly, the person responsible for the "invasion of Africa" on someone else's canonical territory was the newly appointed "Archbishop of Yerevan and Armenia" Leonid. In other words, the ROC's expansion into Africa, which is a blow to the unity of Orthodoxy, will be "directed" from Armenia. And apparently not only to Africa.

Here is the "African" decision of the Synod of the ROC-MP :

1. To find it impossible to further refuse the clerics of the Orthodox Church of Alexandria who have submitted the relevant petitions to be received under the omophorion of the Moscow Patriarchate.

2. Accept into the jurisdiction of the Russian Orthodox Church 102 clerics of the Alexandria Patriarchate from eight countries in Africa in accordance with the petitions submitted.

3. to establish the Patriarchal Exarchate of Africa as part of the Dioceses of North Africa and South Africa.

4. That the head of the Patriarchal Exarchate of Africa be granted the title "of Klinsky".

6. To incorporate into the North African Diocese the stauropegic parishes of the Moscow Patriarchate in the Arab Republic of Egypt, the Republic of Tunisia and the Kingdom of Morocco.

10. For the diocesan bishop of the Diocese of South Africa to have the title "Archbishop of Johannesburg and South Africa".

12. To release His Eminence Leonid from the position of Vice-President of the Holy See, retaining for him the temporary administration of the Diocese of Yerevan-Armenia.

Kalantarov's further strategy of provoking a rift between the Georgian and Russian local Orthodox Churches, and at the same time of causing confusion in world Orthodoxy, which is itself hated by Armenian nationalists and Armenian churchmen alike, is gradually becoming clear.

Of course, this initial blow to the unity of Orthodoxy was dealt by Patriarch Bartholomew of Constantinople, who created a schism in Ukraine called the Orthodox Church of Ukraine (PCU), which, by the way, despite all the pressure, is not recognized by the Georgian Orthodox Church. Most Orthodox believers and all the monasteries of the canonical Ukrainian Orthodox Church (UOC), which is part of the jurisdiction of the Moscow Patriarchate, have neither recognised the new structure nor joined it.

But the Constantinople Patriarchate still had at least some reason to interfere in Ukrainian church life, and there was at least some justification to the outside world, since this, in fact, was originally its territory before 1688. The ROC in relation to Africa has no such justification and can not be. Africa, where the ROC MP has now entered, has never been and could never be in its orbit. This is an encroachment on the canonical territory of others.

The justification for this step by the fact that the Alexandria patriarch recognized the schismatic PCU is not tenable. If he took such an anti-canonical step, as did Patriarch Bartholomew, this is not a reason to trample the canons and rules established by the Church. It is necessary to seek justice within the framework of Church law, and not to act according to the principle "you stole from me, so I will steal from you. All the more so because the Alexandrian patriarch did not "steal", i.e. he did not himself enter the territory of the ROC and create schisms on it.

The question is, why does the ROC and Patriarch Kirill need this? What does he want to prove by "taking rebellious African Orthodox priests under his omophorion"? Most of them have had a "falling out" with the Alexandria Patriarchate not because of any disputes about "theological dogma" but because of a banal breach of church discipline. In particular, there are probably among them those who have been banned from ministry by the Alexandrian Patriarchate because they behaved unworthily, got drunk, indulged in debauchery, etc. A normal priest would not clash with his bishop and the Alexandrian patriarch.

That is, the ROC with the help of Kalantarov has picked up "African church staff". Why does it need him? All the more that the media coverage of scandals, unworthy behaviour of priests who have joined the ROC will do damage to its reputation.

This will not bring the ROC anything but problems in its relations with the other Orthodox churches. But so the next step is being prepared, which is being actively lobbied for by the Kalantaros and other "ancient Christians". In fact, ground is being prepared for the Moscow Patriarchate to invade canonical territory of the Georgian Orthodox Church, while declaring parishes of churches and monasteries in Abkhazia and the Tskhivali region as it was done by invading the canonical territory of the Alexandria Patriarchate in Africa.