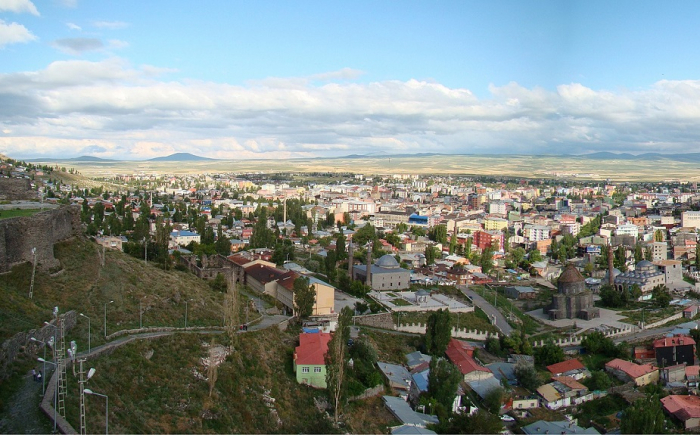 "Land Gibraltar" was the name given to the city of Qars in Eastern Turkey in the 19th century. The name and analogy are not accidental. Just as the rock of Gibraltar on the southern tip of the Pirinean Peninsula was of paramount strategic importance, controlling the sea route from the Atlantic Ocean to the Mediterranean Sea, so Qars was historically of enormous importance on the route from Europe and the Black Sea basin - to the Caspian Sea and Central Asia.

It is no coincidence that after the first Ottoman-Sefevid war, the Treaty of Amasi in 1555 declared Kars and its surroundings neutral and the fortress of Kars had to be razed. The restoration of the fortress by the Ottomans in 1578 marked the beginning of a new series of Ottoman-Sepheid wars. Eventually Kars was retained by the Ottoman Empire and became its "eastern stronghold".

As for earlier times, a knowledgeable person cannot read the tales of Armenian falsifiers about some "Armenian kingdoms" without smiling. And about Qars as the "capital" of one of them. Armenians did not have a full-fledged statehood at the time and no one would have given them full control of such a strategically important location. Therefore, the "Armenian kingdom of Qars", "Armenian Qars" and other fantasies exist only in the mythologised writings of Armenian historians - no historical documents of other nations record them.

For a long time Qars (name translated from the Georgian as "doors") was controlled by Georgia, and it was an "indicator" of power of the Georgian state in the 12-14 centuries. When it was united and strong it mended Qars, the weakening and disintegration of Georgia led to a loss of control over Qars.

Nevertheless, there was a Georgian Orthodox diocese in Qars, and the remains of a Georgian church and Georgian inscriptions have survived. There were clearly more Georgian churches in Qars as in neighbouring Ani (abandoned after devastating earthquakes), but in and around Qars many were appropriated by Armenian settlers and converted into 'Armenian' churches.

Once the Russian Empire entered the South Caucasus, Qars became one of its main 'strategic objectives' in its confrontation with the Ottoman Empire.

Russian troops repeatedly stormed and seized it, but returned it as a result of peace treaties. It was only after the war of 1877-78 that Kars was retained by Russia. Qars was retained by Russia. Under the terms of the peace treaty, the Muslim population of Qars, Batumi and their surroundings were given three years to decide whether to remain and accept Russian citizenship or leave or sell their land and property and move to Turkish territory. Naturally, the Armenian provocateurs who organised attacks on Muslims during the war, pogroms and killings of civilians did everything to "survive" the natives in this post-war period.

Thus, Adjara was devastated for the first time. Qars, too, saw an exodus of Muslims to be replaced by Armenian settlers from the Ottoman Empire.

Nevertheless, even despite the actual ethnic cleansing carried out under the explicit patronage of the Russian authorities, it was not possible to "Armenianize" the region of Qars. Armenians made up a maximum of 20 per cent of the population.

Qars was also destined to become a symbol of the collapse of Armenian 'great power' plans when the Moscow and Kars Peace Treaties of 1921 finally returned the city to Turkey. Thereafter, for a long time Qars found itself 'on the margins', first because of the confrontation between the USSR and NATO and then because of the blockade of the Armenian-Turkish border.

Everything changed dramatically with the development of transit through Georgia and especially with the launch of the Baku-Tbilisi-Qars railway. The city again assumes "key" importance, but not as a military fortress, but as a key transit point on the way from Europe to the countries of the Caspian Basin and further to Asian countries. The opening of the Zangezur corridor and other routes will only increase the strategic importance of Qars and stimulate the development of the entire Eastern Turkish economy.

In this context, the renewed interest of Armenian nationalists in Qars and the eastern Turkish lands becomes understandable. The collapse of the "Artsakh Miatsum" and defeats in the war somewhat cooled the fervour of Armenian "strategists" and their former desire to simply "seize and annex" (by foreign hands, of course) the Turkish lands, which they include in their "great Armenia". It was decided to switch temporarily to more cunning plans. Namely, to take advantage of the opening of the borders and begin "creeping expansion", primarily economic, into the "territories of claims".

The well-known Armenian businessman Ruben Vardanian argues quite interestingly about this, where he talks almost directly about such expansion:

Hence, the most "far-sighted" Armenian figures are "on the move" to reconstruct their strategies on the basis of the new realities. The policy of "besieged fortress" has shown its complete inadequacy and destructiveness for the Armenian ethnos itself, and has brought nothing but disaster and suffering to Armenians and other peoples alike.

The opening of the borders provides the Armenian lobby with an opportunity to try another tactic, which, incidentally, they used very successfully, increasing their influence in the Russian and Ottoman empires before the First World War, until they finally opted for military-terrorist adventures.

In this tactic, the most "vulnerable" country, strange as it may sound, is Georgia. After all, Turkey itself has considerable investment and financial potential of its own. It can let Armenian capital in, but it is unlikely to simply manipulate its projects in Eastern Turkey against itself in Armenian nationalist interests. But for Georgia, given the fact that a large separatist-minded Armenian community lives in Samskhe-Javakheti, such Armenian manipulations and "economic expansion on transit routes" may be dangerous.

After all, today it is the Armenian lobby that manipulates Georgia's same investment and economic cooperation with Russia, foiling any attempts to constructively link this cooperation to cooperation between Georgia and Turkey in Georgia's interests.

The same may be true for the opening of borders and the rapid development of investment projects in Eastern Turkey. Armenian circles can for once even "on the Turkish side" wedge themselves into such projects, which have a bearing on Georgia. All the more so because they have helpers from among the Georgian "patriots" to whom Armenian "friends" paint a "Turkish threat" where there is only real economic cooperation and investment, but without Armenian involvement.