Separatism and demography: Pashinian reveals the reason for the expulsion of Georgians from Abkhazia 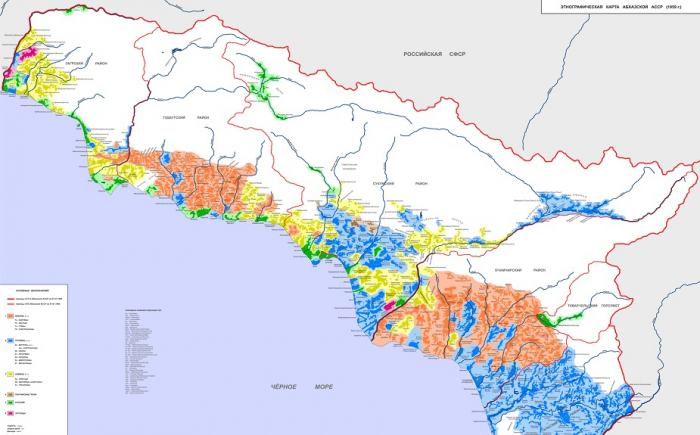 All of the separatist projects in the South Caucasus are known to be interlinked and all of them were originally led, coordinated and directed by the Armenian lobby. And beyond this, they have one main feature: demographically, the separatists were doomed in advance and it was an attempt to "outplay the laws of history" that explained their savage, inhuman cruelty and purposefully organized genocide of the population, the "wrong", from the separatists' point of view, nationalities - Georgians in Abkhazia and Azerbaijanis in Karabakh.

After all, it was enough to take statistical data from Soviet times to understand that demographically the three most "problematic" groups in the South Caucasus were Ossetians in South Ossetia, Abkhazians in Abkhazia and Armenians in Nagorno-Karabakh. The Abkhaz and Ossetians of Samachablo had lower fertility rates than the Georgians and the Armenians of Karabakh had much lower fertility rates than the Azerbaijanis.

Furthermore, this also encouraged nationalism and separatism and was used by provocateurs to say that "if we leave things the way they are, they will "outbreed" us. Although no one in principle prevented the separatists from showing personal example and to "multiply and multiply" themselves. But the fact is that most of the leaders of the separatist movement had families with either few or no children.

However, international law knows no such thing as infringement of human rights on the grounds of belonging to a demographically better ethnos. One cannot expel a person from his homeland just because his fellow tribesmen have more children than the separatists have " "miatsums" Therefore, the separatists not only lied, making up historical myths, according to which native Georgian and Azerbaijani people in their native lands were allegedly "newcomers", but they conducted ethnically cleansing of the peaceful population with wild cruelty during the wars unleashed. Firstly, to radically alter the ethno-demographic situation by killing as many people as possible, and secondly, to intimidate people so that they were afraid to return to their homes. This explains the brutality against the civilian population of both Armenian fighters in Khojaly and the same Armenian fighters and Abkhazian separatists in Sukhumi.

That the separatists and Armenian nationalists have always considered the demographic factor as the main one and that is why they carried out ethnic cleansing, in fact, Prime Minister Nikol Pashinyan acknowledged and in fact revealed the aims of the separatists from the Karabakh clan, as well as those who sponsored and directed separatism in Abkhazia. This is evident from the text of Armenian Prime Minister Nikol Pashinyan's statement on the negotiations on Nagorny Karabakh's notorious 'status' that the previous Armenian authorities were going to conduct:

In other words, everything is clear as to why not only the brutality in the massacre of Azerbaijanis in Khojaly, but also why similar atrocities in Abkhazia against Georgians. It is also clear why there is such wild Georgianophobia of the Armenian lobby in Russia, and why the same Armenia's constant voting against the return of Georgian refugees and Abkhazia at the UN General Assembly.

One can logically surmise where is a completely senseless visa regime for citizens of Georgia introduced on the initiative of the Armenian lobby in Russia? Armenian lobby was not and does not want Georgian refugees to return to Abkhazia. So as not to create a precedent for the return of Azerbaijani refugees to Karabakh. In addition, due to the Armenian nationalists' inherent "greed" for foreign lands, they already consider Abkhazia "theirs", i.e. "Armenian" and do everything to ensure that Armenians demographically dominate here.

Thus, there is no need to wait for 100 years, any referendum held in the territory of the former NKAO, if Azerbaijanis are returned to their homes, will show that the vast majority of the indigenous population of Karabakh considers it Azerbaijan!

For Georgians refugees from Abkhazia, the demographic trends are somewhat similar. It is enough to visit any refugee settlement and one can see a lot of drying baby clothes, diapers and other children's clothes, small children everywhere. And at the same time, the families of the separatist looters who expelled them are often simply dying out in "trophy" homes.

In this regard, one is simply amazed at the mendacity and cynicism of Armenian nationalists. They shout on every corner when they benefit from "friendship and brotherhood" with the Georgian people, but have deliberately arranged ethno-cleansing of the Georgian population from Abkhazia, deliberately do not allow Georgian refugees back to their homes and pursue a policy of "visa barriers" so that Georgians could not get into occupied Abkhazia even through Russia which occupied this territory.