The "carrot and stick" of the Armenian lobby for Georgia 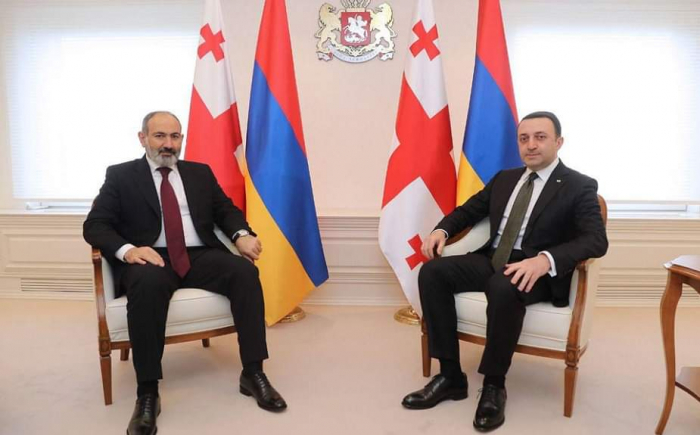 The attitude of representatives of the lobby of "the most ancient Christian people" towards Georgia is, at first glance, a bit ambiguous. Thus on December 20th 2021 the main representative of this lobby in Russia, Russian Foreign Minister Sergey Lavrov-Kalantarov defiantly met with so-called "foreign ministers" of the separatist regimes of Sukhumi and Tskhinvali in Sochi in a "trilateral format".

And here provocative statements were made about deepening dismemberment of Georgia. In particular, that: "Russia has close allied relations with Abkhazia and "South Ossetia", which have a solid contractual and legal basis and are not subject to conjuncture. In line with the policy approved by the President of the Russian Federation, Russia is actively assisting the young states of the Transcaucasus in establishing themselves as modern democracies, strengthening their international positions and ensuring reliable security.

It is symbolic that this was done in the same Sochi, where on 26 November 2021 Russia's Vladimir Putin met with Azerbaijani President Ilham Aliyev and Armenian Prime Minister Nikol Pashinyan and where, in essence, the unblocking of communications was announced. At the same time, the "Artsakh" separatist project was "crossed out" - not a single word was said about Karabakh or so-called "Artsakh". Meanwhile, the "Artsakh" separatist project is the same project through which Armenia denies the territorial integrity of Georgia - because the so-called "NKR" initially recognised the so-called "independence" of separatist Abkhazia and so-called "South Ossetia" even before these territories were officially occupied by Russia in 2008.

"Lavrov briefed his colleagues on Russian efforts to improve the situation in the region, including the implementation of the agreements of the leaders of Russia, Azerbaijan and Armenia of 9 November 2020, 11 January and 26 November this year, as well as the launch of a consultative regional 3+3 platform," the Russian Foreign Ministry said following a meeting between Kalantarov and the so-called "foreign ministers" of the separatist regimes of Sukhumi and Tskhinvali.

In fact, Sergey Lavrov-Kalantarov, while formally advocating this platform, is doing everything possible to alienate Georgia from it. In doing so, he is playing along with those Armenian revanchists who are screaming about the "non-viability" of this platform from the outset, demanding that the issue be resolved in the format of the "OSCE Minsk Group" with the obligatory "decisive word" of France, which always has pro-Armenian positions.

And their main argument is "Georgia does not want to participate in the 3+3 format".  They do not specify why. Because the Armenian lobby nurtured separatism in Abkhazia and Tskhinvali. It has supported and synchronized with its "Artsakh" and the same Armenian nationalist Lavrov-Kalantarov does everything to strengthen these separatist projects, and consequently, there was no restoration of territorial integrity of the very Georgia with which Yerevan hypocritically claims about "friendship".

This is the height of cynicism and insidiousness.

The day before, in early December 2021, an unprecedented meeting was organized between the so-called "Abkhaz ambassador" in Damascus and the Chinese ambassador to Syria, who under pressure from the same Sergei Lavrov-Kalantarov recognized the so-called "independence" of the separatist regimes of Sukhumi and Tskhinvali. It is clear that this meeting was organized not by the "Syrian Abkhazian diaspora" and not even by the leadership of Syria, but by the same Armenian lobby, most likely by the same Lavrov-Kalantarov. That is, on Russia's part, the Armenian lobby is making unprecedented efforts to include other geopolitical players, including China, which is the most important economic partner of Georgia (and Armenia) in dismembering Georgia.

However, a short working visit of Armenian Prime Minister Nikol Pashinyan to Tbilisi on December 20, 2021, the same day when Kalantarov met with the separatists in Sochi, was held in a completely different vein. He literally "showered a lot of kindness and friendliness" on Georgia. He spoke about the prospects for "improving and increasing the effectiveness of economic cooperation between Armenia and Georgia":

"I am pleased that I had the opportunity to see my colleague and friend, Georgian Prime Minister Irakli Gharibashvili in Tbilisi. At the meeting we agreed that we will direct our joint efforts towards the improvement and enhancement of the economic cooperation between Armenia and Georgia"., — Nikol Pashinyan wrote on his Twitter.

Nevertheless, it should be well understood that in matters concerning Georgia, the leadership in Yerevan and the Armenian lobby outside Armenia operate in sync. And the fact that Nikol Pashinyan's meeting with Georgian Prime Minister Irakli Gharibashvili was "attached" to Sergei Lavrov-Kalatarov's meeting with his separatist "colleagues" only confirms this. Emphasis and obsessive "friendliness" of the Yerevan authorities does not rule out that the Armenian lobby in Russia does not intend to retreat a step from its support for separatism and the course towards dismemberment of Georgia.

After all, it did not do everything to foment separatism and separatist wars (transferring Armenian fighters from "Artsakh" to the Abkhazian front in the critical periods of fighting in Karabakh!), to bring matters to the war between Russia and Georgia in 2008, to take away Georgian territories to "give everything back to the Georgians. All the more so because now, almost simultaneously, through the efforts of the Armenian lobby, settlement and "quiet expansion" of Armenians in Abkhazia is taking place from "all sides".

The question arises: why exactly today do the "brother Armenians" pay so much attention to Georgia? And they so cunningly "surround" it with a kind of "carrot and stick" policy.  When, at the same time, the Armenian lobby in Russia is literally at the "peak" of pressure in relations with Georgia through the separatists and does not reduce the degree of Georgianophobia, while authorities in Yerevan have dramatically increased degree of "friendliness". At that both are trying to implicate external forces in their anti-Georgian intrigues ...

It is all very simple. The Armenian lobby understands that it cannot oppose the final unblocking of transit routes in the South Caucasus, and Armenia's role as the main "blackmailer" on these routes is hopelessly lost. On the contrary, Georgia needs transit and integration in major economic projects more than ever. They unambiguously strengthen Georgia, making it indispensable as a "transit hub" for the whole of Eurasia.

Georgia that has strengthened its international influence can not be easily "split" into separatist projects. All the more that both Turkey and Azerbaijan are emphasizing in every possible way their support for the speedy restoration of the territorial integrity of Georgia.

In the end, the Armenian game is aimed at breaking the establishment of new fruitful cooperation in the South Caucasus and bringing back the old conflicts and "front lines" and the constant "suspension" of the situation, which discourages investors and prevents serious international projects. To do this, they need to prevent Georgia's participation in the 3+3 format by any means, and to do this in such a way that Georgia is the initiator of the destruction of the platform. And to do this, the same Armenian lobby (and demonstratively by the same leadership of the Russian Foreign Ministry) is supporting separatism in Abkhazia and Samachablo in every possible way.