Does Georgia persist because of the Armenians? 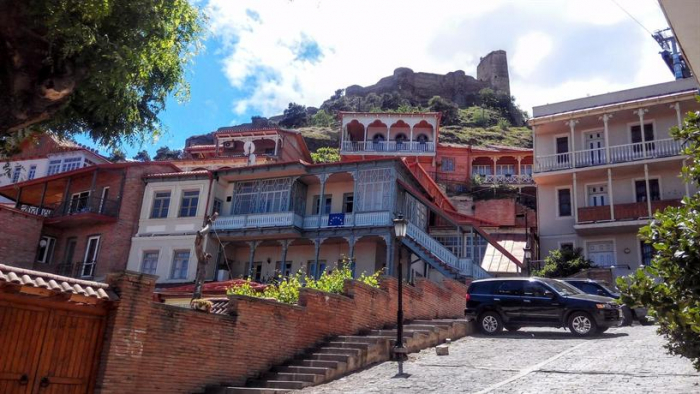 Armenian TV presenter Noyan Tapan Mariam Avakyan recently said that Georgia owes its existence as it is today to the Armenians:

Mariam Avagyan disagrees that never in the history of Georgia has there been a single hero of Armenian nationality, not a single ethnic Armenian, who has carried any benefit for Georgia, Georgians.

This is very easy to check it out. It is enough to take any chronicle, historical chronicle and historical document or a serious study of the time of existence of the Georgian states before they were absorbed into the Russian Empire. One can take the collection of chronicles "Kartlis Tskhovrea", other documents and studies, read the works of Vakhushti Bagrationi and other historians. There are hundreds and thousands of names and surnames that influenced the history of Georgia, its struggle for faith, establishment of its statehood and culture. Not all of them are Georgians - there are Arabs, Persians, Turks, Greeks, Kurds and others. But it is simply impossible to find an ethnic Armenian, who has done any good either to united independent Georgia, or to Georgian states, into which Georgia later divided (Kartli, Kakheti, Imereti, Samtskhe-Saatabago, principalities of Guria, Samegrelo, Svaneti, Abkhazeti). None of them exist!

" They do everything for Georgia". And the Armenians "Create Georgia" only in the myths and fairy tales of Armenian historians. Indeed, if you read them, the Georgian alphabet was "invented by Mesrop Mashtots", and Shota Rustaveli suddenly turns out to be "Armenian" and much more.

And it is impossible to find a single Georgian in Armenian sources. Even when at the dawn of our era there was a geographical region called "Armenia" (but which had nothing to do with the Khayyan ethnos and present-day Hayastan) and it was ruled by Georgians of Georgian descent by Kings Mithridates of Iberia and Radamist - this fact of their Georgian origin Armenian historians try to conceal in every way.

We cannot really find an Armenian who has done anything for historical medieval and modern Georgia. Apart from unsubstantiated falsified statements by Armenian historians that "Armenians created everything in Georgia", with no specific names or dates.  Also, Armenian historians have no gratitude to Georgia, which settled in the lands of the Georgian state, allowing them to settle and become wealthy here, including at the expense of the Georgian population, protecting Armenians from the oppression of other nations (and oppression was often for a reason, because it was not only Georgians who betrayed the "ancient great Armenians"). Moreover, Georgians helped Armenians even when they were deprived of statehood, and the policy of settling of Armenians in Georgia was initiated by the Russian Empire. In the 19th century, tens of thousands of Armenians from Turkey and Iran were resettled to Georgia as "poor refugees" and Georgians sympathised with them and shared the latter.  They helped them to settle on historical Georgian lands, particularly in Samtskhe-Javakheti and Abkhazia.

Everybody knows how this ended. Armenian settlers began to seize and invade Georgian churches en masse, and today they absolutely illegally and officially demand to give them these sanctuaries, laying official claims to at least 465 Georgian churches throughout Georgia. This is despite the fact that all Georgian churches, every single one (!) in the Republic of Armenia (and there are dozens of them) were appropriated by Armenians and called "Armenian".

Georgian churches in the territory of the Republic of Turkey are also claimed by Armenian falsifiers, calling cathedrals such as Oshki, Bana, Ishkhani, Shatberdi and others "Armenian" churches, although there is not a single Armenian inscription there. All the inscriptions are Georgian!

However, the ultimate "gratitude" of Armenian nationalists towards Georgia was undoubtedly their betrayal in Abkhazia, when Armenian fighters of the Baghramyan battalion and other formations fighting on the side of the separatists carried out a real genocide against the peaceful Georgian population, seized their homes and flats, brutally murdering their Georgian neighbours, who had been helping them all their lives. Over 300 thousand Georgians were expelled from their homes. And Armenia regularly, every year at the UN General Assembly, voted against the return of Georgian refugees.

Meiton Kantaria, the hero of the Great Patriotic War, who hoisted the banner over the Reichstag in Berlin, was expelled from his home by the separatists and the "Armenian brothers".

Let's start in order, with the list of heroes of the Great Patriotic War, which as we know is part of the Second World War. We have already recalled how the Armenian fighters treated the real hero Meliton Kantaria. What would you think of such a "hero" as the founder of Nazi SS Armenian Legion (together with another Dashnak, Garegin Nzhdeh), who fought for the Third Reich and before that commander of Armenian units during the 1918 Georgian-Armenian war "General Dro" or Drastamat Kanayan? This future Nazi criminal began his "exploits" with the dastardly murder of the outstanding son of the Georgian people, the Baku governor Mikhail Nakashidze. Should Georgians be "grateful" for that and consider him a "hero"?

Therefore, when mentioning the "Armenian heroes" of the Great Patriotic War who fought for the USSR, Armenian historians should have also mentioned the "heroes" who were on the side of the Nazis. All the more so as monuments to Garegin Nzhdeh in Armenia and further on in the zone of Armenian settlement in Azerbaijani Karabakh are much more pompous than those to Marshals Bagrayamyan and Babajanyan, who are actually from the Armenianized Udin village of Chardakhlu in Azerbaijan, and have no special relation to Georgia and have virtually "no intersection" with it.

With regard to the Armenian "generals" who allegedly fought for Georgia when it had statehood, prior to its incorporation into the Russian Empire in 1801, the example of the Armenian meliks who originally entered the service of Tsar Irakli II is very revealing. In 1795, during the invasion of Agha-Mukhamad khan and the battle of Krtsanis, the Armenian Meliks 'simply' joined the side of the conqueror. And this is the "merit of Armenian commanders to" Georgia? Because of their betrayal, the Georgian army was defeated and Tbilisi was burnt and devastated. Let us compare this fact with the fact that during the same battle of Krtsani in the ranks of the Georgian army fought and died heroically 250 Azerbaijanis from Borchali, who did the same heroic deed as the 300 Aragvi heroic dead.

Regarding the kings allegedly of "Armenian origin" and the fact that the Bagrationi (Bagratid) dynasty is supposedly of "Armenian descent". This is a complete mythologized nonsense, repeatedly dismissed by all serious international historians. Yes, some Georgian kings until the 11th century had wives who are written in the annals as "Armenian" and of "Armenian" origin.

But it should be noted that in the Middle Ages the word "Armenian" did not mean nationality, but religion (monophysite or Armenian-Gregorian). The entire feudal elite in the Christian entities to the south of Georgia was not of Khaia origin - they were mostly Caucasian Albanians, Turks or Kurds. When they became the spouses of Georgian rulers, these women renounced the Armenian monophysite heresy and became Orthodox Christians, while an Orthodox Christian could not be an 'Armenian' at that time, as 'Armenian' was a religious concept.

Regarding the fact that "...would Georgia be as it is today, in the borders in which it exists today, and would be a Christian country at all, if it were not for the Armenian contribution to this country ...", Mariam Avakyan forgot to mention that all the first centuries of Christian Georgia's existence - was a constant struggle against the Armenian monophysite heresy. Armenians, who hated orthodox Georgians, targeted external invaders - Persians, Arabs, Seljuk Turks at every opportunity. And first of all they wanted to destroy the Georgian Orthodox Church by foreign hands. The curse of the Armenian Catholicos Araam on the Georgian Catholicos Kirion and the entire Georgian people is worth mentioning:

"We have anathematized and crucified Chirion according to the canonical commands of the fathers established concerning the Romans, which we adhere to this day.... Thus we have also decreed concerning Iberians (Georgians): not to communicate with them at all, not to pray with them, not to eat, not to drink, not to be related with them, not to take nurses, not to go on pilgrimage to the cross which is in Mtskheta, and to another that is in Manglis, not to allow them in our churches, not to marry. Only buy from them and sell, as to the Jews. Therefore, if anyone shall associate with them without regard to this, let him be cursed with soul and body, and excommunicated for the rest of his life. All those who circumvent this commandment, let them descend into darkness and be consigned to be eaten by eternal fire.»

By the way, this ecclesiastical curse (anathema) on the Georgians has not been abolished in the Armenian Church, it has been in effect for centuries and is still in effect. And the Armenian clergy have not repented or remorse for this and for their hostility towards Georgia to this day.

Thus, the Armenians did their best to prevent Georgia from being a Christian nation, to destroy its statehood, to enslave it by foreign invaders, with whom the Armenians found a "common language" with amazing ease and were able to resettle the Georgian lands. Everyone remembers how they gained confidence in the Russian administration and economically enslaved Georgia in the 19th and early 20th centuries. But it was the same with other invaders and conquerors of Georgia. However, chronic penchant for intrigue and betrayal of Armenians led to the fact that from time to time their "masters" in their own lands committed persecution against Armenians.  But even then, Georgians, remembering no evil, have always welcomed Armenian refugees on their land, always doing whatever they could to help. And they have always defended the peace and well-being of Armenian settlers with their weapons, at the cost of their lives.

Rivers of Georgian blood were shed in defence of Armenians. However, history does not recall Armenians shedding blood for Georgia and the Georgians. On the contrary, at the first opportunity, Armenian nationalists took the side of Georgia's enemies and helped kill Georgians. This was the case during the Battle of Krtsani in 1795, and so it was in Abkhazia in 1992-1993.

As for the alleged "Tbilisi built by Armenians", firstly, this is a lie, and secondly, the Armenian merchants and financiers did not build houses and palaces in Tbilisi for the Georgians at all. It would also be appropriate to mention the widespread practice of Armenian officials "embezzling" budgetary funds meant for Georgia, working in the administrative apparatus of the Tsarist Russia in Tiflis. They built them for themselves, ruthlessly exploiting the Georgian population, fraudulently seizing land from Georgians, depriving Georgians of churches and shrines (including destroying Georgian artefacts and inscriptions and inserting Armenian fakes). And after that they have a claim to call it a boon?!