Armenia's collaboration with the West as a "planned project" and the grandson of a traitor Nazi as a "legitimate leader". 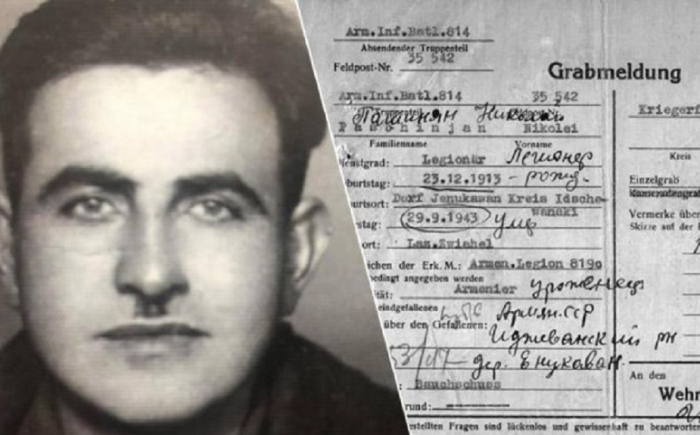 How a politician like Nikol Pashinyan (previously not a very well-known journalist) managed to organise a "Maidan" coup in 2018 and come to power in the Republic of Armenia almost "out of nowhere" came as a surprise to many. Although, given that the US had built almost the largest embassy in the world in Yerevan and that all sorts of NGOs, including those associated with George Soros, a famous "revolutionary", had felt more than at ease in the Republic of Armenia for many years, it was to be expected.

In fact, the "Armenian project" itself was originally a Western project and was created by Western powers and structures (including the Vatican). There can also be no doubt that at the first opportunity Armenian nationalists will move from Russia to the camp of "civilised Europeans".  The mass collaboration of Armenian nationalists during the Great Patriotic War and the defection of Armenian "heroes" such as Garegin Nzhdeh and Drastamat Kanayan (General Joe) to the service of Hitler are the most eloquent proof of this.

But these are, so to speak, "individual betrayals". But in the geopolitical bends of history, Armenia's defection from Russia and its interests was practically planned by those who originally created and nurtured Armenian nationalism.

And if at a certain stage, Russia was involved in supporting the Armenian project, forcing it to spend its resources and military force and go against its own geopolitical interests, it does not mean that Armenia will be "loyal" to Russia and thank it in any way. Quite the contrary.

However, Western curators seem to have chosen even "local personnel" to lead the Armenian project out of "hereditary traitors and collaborators". This was done for a number of reasons. If the grandfather was a traitor in a certain situation, it is highly likely that the grandson will do the same, and secondly, the grandson can be blackmailed with unflattering facts about the biographies of his family members in order to "keep them on the hook".

It is clear that Pashinian's opponents, the same ex-presidents from the Karabakh clan, Serzh Sargsyan and Robert Kocharian, are also bloodied up to their ears in crimes, not to mention rampant corruption. But desperate for revenge, deprived of power, their supporters have begun "digging up and publishing" dark facts about the current Armenian prime minister through the media. Such was the story in the Armenian language edition politik.am, the title of which is fashionably translated as "Pashinyan's grandfather was taken prisoner by the Germans. Who is the real traitor?". (https://politik.am/am/pashinyani-papn-el-geri-er-ynkel-nacistakan-germaniayin-vo-v-e-irakan-davachany ).

It is clear that the revanchist publication views Pashinyan's personality from the perspective of fierce Armenian nationalism, accusing him in particular of "surrendering Artsakh" that he allegedly does not want to release Armenian saboteurs captured by the Azerbaijani side, whom Yerevan calls "prisoners".

We also know the documentary evidence of this fact, the biographical data stored in the archives, the personal certificate of the SS legionary Nikol Pashinyan, who participated in the punitive operations of the Nazis against the civilian population and partisans in Ukraine, was wounded and died in a German military hospital in Zvyagil (now Novograd-Volynsky city of Zhytomyr region of Ukraine). Incidentally, it was in 1942-43 that the Nazis and their acolytes among the Armenian "Legionnaires" exterminated practically the entire Jewish population.

«Nikol Arakel Pashinyan, 1913-1943. Served in the 554th Rifle Regiment of the 138th Rifle Division. Eternal glory to those who fell for their country».

And it was after this post that journalists became interested in the details of Pashinyan Sr's biography and found out that Nikol Pashinyan's grandfather collaborated with Nazi Germany. Using the "Memorial" database, created by the Russian Ministry of Defence (where the archives of data on the dead, the missing and those killed during the Great Patriotic War are kept), they found the data of Nikol Pashinyan's grandfather.

"My grandfather, Nikol Arakel Pashinyan, died in the Second World War. As far as I know, their regiment was taken prisoner in the Crimean Peninsula, never having managed to get weapons until now.  My grandfather and some friends then escaped from the concentration camp and died during the escape. They say he was head of the passport department of the Ijevan police and went to the front as a volunteer, leaving my two aunts and my newborn father at home."

On his official website, as we can see, Pashinyan says that his grandfather did not even have time to get a weapon and was taken prisoner. In other words, Pashinyan admits that his grandfather could not even fight for the USSR (i.e. Russia) for a day. And all his main "exploits", consisting in the destruction of civilians, he performed in the service of Nazi Germany.

The deceitfulness, duplicity and traitorous nature of my grandfather Pashinyan, who on the one hand was called "Soviet soldier", but in reality was not fighting for the Soviet Union, and at the first opportunity or surrendered or possibly deliberately took up arms to serve the Nazis (there were such cases) is ironically "repeated" by his grandson, but on a much larger scale. But does this mean that only Pashinian junior is so "bad" and his predecessors are "good"? Not at all! And Armenia began betraying Russia long before Pashinyan did.

Alexey Fenko, associate professor at the International Security Department of the Faculty of World Politics at Lomonosov Moscow State University, recently told the Vestnik Kavkaza newspaper about the traitorous nature of the actions of the current Armenian authorities. He pointed out that for 20 years Armenia had been pursuing a policy of gradual distancing itself from Russia, which accelerated sharply under Pashinyan, although significant steps had been taken before him:

"...Over the past five to six years, the Armenian foreign policy course has evolved into a policy of undermining Russian positions in the CSTO and in the post-Soviet space. That is, it started much earlier than Nicola Pashinyan came to power - by and large, back in 2009, when Armenia became an active participant in the Eastern Partnership programme", - he recalled.

In this regard, Yerevan's participation in any formats offered to it by the US and the West in general is to be expected - this is the Armenian foreign policy.

"Back under Sargsyan, Armenia signed a scaled-down version of the association agreement with the EU. To understand where Yerevan is heading, it is enough to look at the abundance of its partnership programmes with NATO. Therefore, in Brussels and Washington, Armenia is perceived as a permanent pursuer of Western policies, including against Eurasian structures"., - said Alexey Fenenko..

At the moment, the U.S. is primarily interested in ensuring that Armenia continues to undermine the CSTO from within. "Over the past three years, Nikol Pashinian has constantly created crises that have blocked the work of the CSTO in one form or another. At the same time, he has not withdrawn from the CSTO, although if he dislikes the organisation so much, he could have simply withdrawn his country from it. Instead, he has precisely sought to obstruct its work”, - Alexei Fenenko drew attention to this.

"The second direction in which the US uses Armenia as its agent is to undermine the customs union established within the Eurasian Economic Union at the expense of the Armenian association agreement with the European Union. Whether bad or good, it creates a certain hole within our customs system. Another direction is to prevent the formation of regional security formulas in the South Caucasus, so that conditions for instability remain in the region bordering southern Russia," Fenenko listed.

Let us also recall that it was not Nikol Pashinian, but former presidents Robert Kocharyan and Serzh Sargsyan, who started to glorify Nazi Nzhdeh and erect monuments to him all over Armenia, including in the centre of Yerevan. That is, in fact, instead of "hidden traitors", former Komsomol members, separatists and executioners of the peaceful Azerbaijani population of Karabakh, an open traitor, the grandson of the traitor and Nazi punisher came to power.

And the Russian Federation found itself in a dual state. Its "official ally" is headed by an enemy and hater of Russia, who has already struck at every opportunity (just blocking the activities of the CSTO by arresting its general secretary Khachaturov), and who knows what other harmful steps he is capable of.