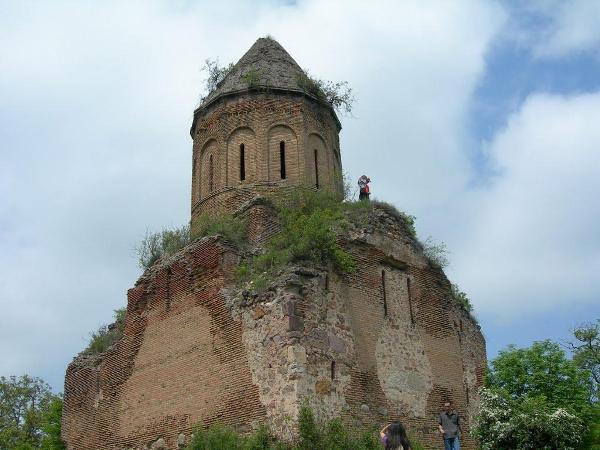 A meeting between Sheikh-ul-Islam Allahshukur Pashazade, chairman of the Caucasus Muslims Office, and Catholicos Garegin II, head of the Armenian Apostolic Church, mediated by Patriarch Kirill of Moscow and All Russia, was held in Moscow on 13 October 2021 at Danilov Monastery to negotiate a peaceful settlement between Azerbaijan and Armenia.

On the one hand, of course, this step should enhance the "weight" of the Moscow Patriarchate's diplomatic effort to reconcile Armenia and Azerbaijan, and from this point of view the factor of the appearance of a new diocese of the ROC may have positive significance. However, we must not forget that on the territory of the Republic of Armenia there are dozens of ruined Orthodox churches and monasteries, especially the Georgian ones. The monasteries of Kobairi, Svregi, Akhtala, Khnevanki, Kirantsi, as well as the illegally seized Georgian border monastery of Khujabi and many other churches and monasteries have been declared "Armenian" by the Armenian authorities and the Echmiadzin. They are either being deliberately converted into Armenian ones by bringing khachkars and knocking down Georgian frescoes and inscriptions, or in most cases, simply destroyed.

And here the question arises - will the Russian Orthodox Church in Armenia protect Orthodox sanctuaries? In this very case, the Georgian ones. Or will it also, as in the occupied territories of Abkhazia and the Tskhinvali region (which the ROC officially recognizes as a canonical territory of the GOC), turn a blind eye and in some cases facilitate the destruction of the Georgian heritage and Georgian shrines?

The issue is actually a very serious one. It should be reiterated that when the ROC and the GOC mutually recognised each other's autocephalyse in 1943, it was agreed that Orthodox parishes on the territory of the Armenian USSR, even where the parishioners were ethnic Russians and Ukrainians (all ethnic Georgians from the Armenian SSR "Armenian brothers" had by then "survived") would be registered by the GOC.

For a long time the parish in the northern Armenian SSR village of Kirov (Nikolayevka) was nurtured by priests of the Georgian Orthodox Church, in particular the spiritual father of the current Patriarch Ilia, Metropolitan Zinoviy (Majuga) of Tetritskaro. The village of Nikolaevka was founded by Ukrainian Cossacks in the 19th century; after the Sovietisation of Armenia it was renamed Kirov and is now called Amrakits.

However, the fact that Georgian clergymen were serving in the Armenian SSR did not sit well with the "Armenian Christian brothers" and after the Spitak earthquake, the church in the village of Nikolaevka was closed (although it is still very well standing) under the far-fetched pretext of "emergency conditions". The majority of Russians and Ukrainians living in the village were eventually forced to leave "hospitable Armenia".

Given the 'alliance' between Russia and Armenia and the presence of Russian troops and a military base there, the question arises of the activity of Orthodox parishes, at least in Yerevan and at the location of the Russian military base. From this point of view, the creation of a separate diocese of the Russian Orthodox Church in the Republic of Armenia is logical and has not caused any particular objections from the GOC, despite the fact that this would in fact unilaterally revise the 1943 agreements.

But the Georgian Patriarchate is well aware that, claiming several hundred Georgian churches in Georgia itself, the Armenian nationalists would not let Georgian priests into the territory of the Republic of Armenia. So let at least Russian co-believers, if they are really Orthodox Christians not in name only, but in reality, start to deal with Orthodox relics on this territory.

However, the ROC, for its part, does everything to preserve the Russian Orthodox communities in Georgia and the Russian architecture, the Orthodox churches built during the Russian Empire. And hopes that at least the ROC will raise the issue with Echmiadzin and the Armenian authorities of the inadmissibility of the destruction of Orthodox shrines on the territory of the Republic of Armenia simply simply because they are Georgian.