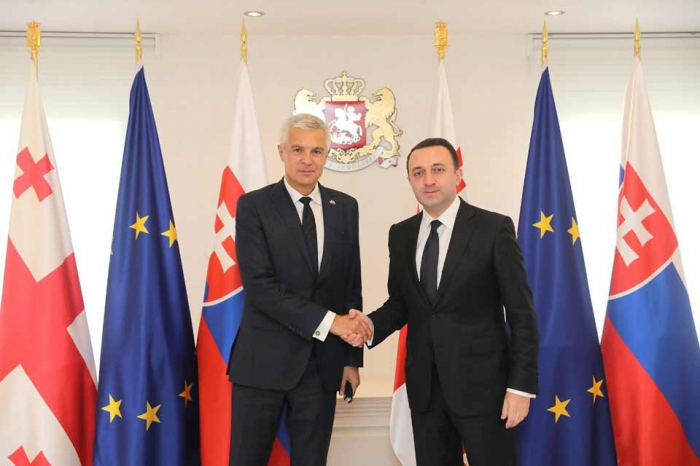 Today, Georgian Prime Minister Irakli Garibashvili met with Slovak Minister of Foreign and European Affairs Ivan Korčok, who is on an official visit to Georgia.

According to the government’s press service, the meeting focused on furthering the relations between the two countries in all areas. The conversation emphasized the importance of sectoral cooperation, the potential for developing bilateral trade and economic relations, and bolstering tourism cooperation. It was pointed out that Georgia appreciates Slovakia’s support through concrete projects and targeted assistance programs.

Attention was paid to pandemic-related challenges and the importance of overcoming them through joint efforts. The Head of the Georgian Government thanked the Slovak Minister of Foreign and European Affairs for Slovakia’s support in fighting against the COVID-19 pandemic and its consequences.

The meeting also revolved around Georgia’s European integration, with an emphasis on the Georgian Government’s plans to apply for full EU membership in 2024. The upcoming Eastern Partnership Summit was singled out. Irakli Garibashvili reaffirmed the Associated Trio’s commitment to common European aspirations. The parties underlined the importance of enhanced engagement between the EU and the Associated Trio, and of Slovakia’s active support in this process.

The meeting also underscored Georgia’s appreciation for Slovakia’s involvement in the implementation of the Substantial NATO- Georgia Package.

Ivan Korčok reassured the Prime Minister of Slovakia’s firm support of Georgia’s sovereignty and territorial integrity within its internationally recognized borders. Special emphasis during the meeting was placed on the problems encountered by the populations along the occupation lines. Today, Ivan Korčok will familiarize himself with the situation on the ground. Irakli Garibashvili the Slovak Minister of Foreign and European Affairs for Slovak observers’ engagement in the EU Monitoring Mission.