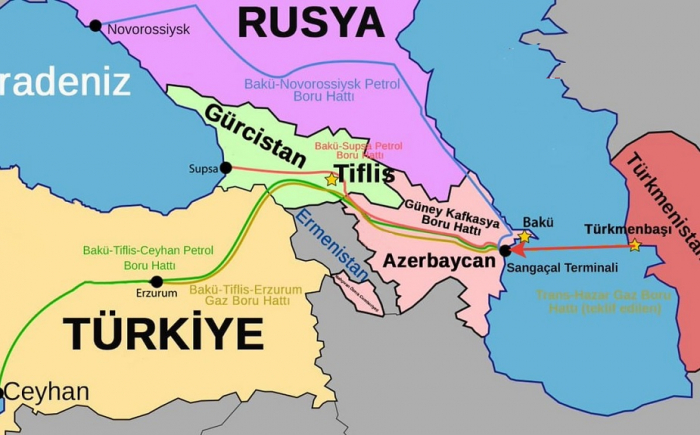 On the eve of the visit of the Prime Minister of the Republic of Armenia Nikol Pashinyan to Georgia, almost all Armenian and pro-Armenian media wrote how "beneficial" the Iran-Armenia-Georgia transit corridor was for Georgia in comparison with the East-West corridors, which are already being successfully implemented and "gaining momentum." Naturally, the Armenian lobbyists of the new corridor did not say a word about the de-occupation of Abkhazia and the Tskhinvali region and the return of Georgian refugees.

All this suggests that they wanted to drag Georgia into another "trap". And by all indications, the Georgian authorities did not succumb to tricks. After Nikol Pashinyan's visit, all talks about the alleged "profitability" for Georgia of the South-North corridor through Iran and Armenia stopped.

But today it turns out that the already existing corridors and pipeline, through which energy resources from the countries of the Caspian basin through Georgia go to the West, will bring ever-increasing revenues to the Georgian budget and support the Georgian economy in the current difficult situation.

So according to NASDAQ information (https://www.nasdaq.com/articles/turkmenistan-oil-transit-via-russia-to-halve-from-oct-as-vitol-redirects-flows-2021-09-08) transit Turkmen oil through Russia should decrease, and through Georgia should rise sharply. A drop in volumes from October 2021 is projected to double as Turkmenistan redirects oil flow through Azerbaijan, Georgia, and Turkey via the Baku-Tbilisi-Ceyhan (BTC) pipeline.

International trading firm Vitol and Azerbaijan's state-owned SOCAR have reportedly already agreed to transport Turkmen oil via the Baku-Tbilisi-Ceyhan (BTC) pipeline, which will dramatically reduce transit traffic through the Russian Black Sea port of Novorossiysk. This was reported by three sources.

“SOCAR and Vitol have agreed to transport about 1 million tons of Turkmen oil through the BTC pipeline per year. Deliveries will begin in October, ”a source familiar with the details of the agreement told Reuters.

Another source also informed that Vitol supplies Turkmen oil in volumes that it purchases from ENOC in the UAE under fixed-term contracts.
Russia and Azerbaijan have been competing for the transit of Turkmen oil for a long time. Turkmen oil has been part of Azerbaijan's BTC streams for years, but Russia has also supplied Turkmen oil to Transneft's pipeline system for years.

In 2019, the bulk of Turkmen oil went to Novorossiysk, first through the port of Makhachkala on the Caspian Sea. Turkmenistan supplied about 160,000 tons of oil to Russia every month, which was exported as Siberian Light oil after being mixed with Russian oil exported through Novorossiysk. However, according to sources, from October 2021, monthly exports of Turkmen producers will fall to 80,000 tons after Vitol redirects volumes destined for Novorossiysk to the BTC pipeline, which provides higher profitability.

SOCAR has not yet responded to a Reuters request for comments on the transportation of Turkmen oil. Vitol also declined to comment. But one thing is clear that a sharp increase in the transit of Turkmen oil through the Baku-Tbilisi-Ceyhan oil pipeline will be very beneficial to Georgia.

The growth of transit of energy carriers from Turkmenistan through Georgia shows that in this direction for Georgia there is one colossal "transit prospect", which for some reason economic analysts have not yet noticed. Namely, through Turkmenistan, the Caspian Sea, Azerbaijan, and Georgia, a transit route can be laid connecting China and the Indian Ocean with Europe.

Naturally, both Iran and Russia object to new corridors. But what can they offer in return? Support for separatism and border redrawing, Moscow and Tehran's support for the regime in Yerevan, and despite its aggression against neighbors and the occupation of foreign territories, showed that "geopolitical dead ends" can be well created here. But Russian and Iranian "geopolitics" have not learned how to lay transit routes that are in demand in today's rapidly developing and globalizing world.

Moreover, the political conditions for launching such a route are more than favorable. And this route completely "intercepts" the entire cargo flow that the Armenian "projectors" would like to launch through the Iran-Armenia-Georgia corridor lobbied by them and having no chance of real implementation.

The fact is that Turkmenistan borders on Afghanistan, where a change of power has recently taken place. The new Taliban government is most interested in the stable economic development of its country, and even more so its "transit status" would contribute to the inflow of investments. Afghanistan's relations with neighboring Pakistan are literally "doomed to close cooperation." If only because most of the ethnic Pashtuns do not live in Afghanistan but in Pakistan. And Pakistan is an exit to the Indian Ocean, "bypassing" the same Iran.

Thus, the transit corridor China-Pakistan-Afghanistan-Turkmenistan-Azerbaijan-Georgia is emerging. So far, the only "weak point" of this corridor is the lack of "end-to-end" railway communication through Afghanistan. But goods through this country may well be transported by road. In general, the construction of a railway through Afghanistan from Pakistan to the countries of Central Asia is an urgent need and within the framework of a new transit corridor, this project can be quickly implemented.