Shooting at David-Gareji was planned by the Armenian special services in April 2019. It was only miraculously prevented. 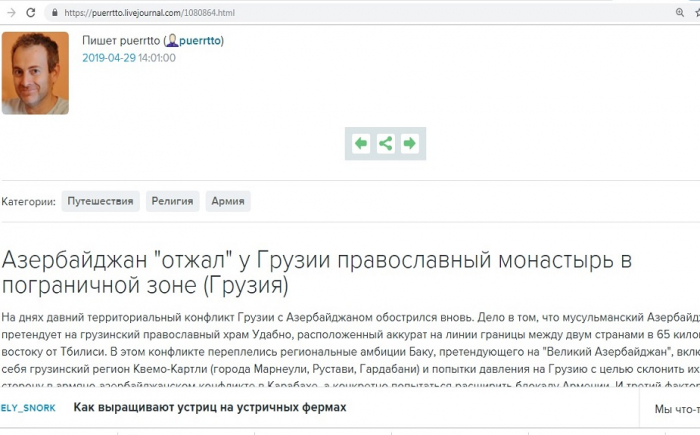 Recently, only miraculously, they managed to prevent the bloody denouement of provocations in the area of the David-Gareji monastery, when a group of aggressive-minded people, who did not even remotely resemble Orthodox believers, specifically provoked Azerbaijani border guards to use weapons, trying to take it away. Up to the fact that one of the border guards snatched the horn from the machine.

Only endurance and composure of border guards allowed breaking the plans of the provocateurs. After all, they clearly expected that the border guards would shoot in response to verbal abuse and physical attack. Even in the air ... One could have no doubt that immediately all the hostile media would have raised a cry to Georgia and Azerbaijan that “Azerbaijanis are shooting at Georgian pilgrims.”

There is no doubt that the forces that are trying to inflame the conflict between the friendly countries of Georgia and Azerbaijan will go on new provocations. And what kind of forces can be immediately guessed by literally reading the script, which, was added on April 29, actually put it on its page in LiveJournal, blogger Alexander Lapshin, who works for the Armenian special services.

An unprecedented condescension was already shown to Alexander Lapshin, having been released from prison, where he was serving a sentence for violating the Azerbaijani laws on the occupied territories. But as it usually happens with pathologically corrupt provocateurs - a good attitude towards himself, Alexander Lapshin does not appreciate. And he continues, on the instructions of his Armenian “masters,” on and on, where it is possible to carry out anti-Azerbaijani, and, more recently, anti-Georgian activities.

April 29, 2019, immediately after the first exacerbation of the situation around David Gareji, Alexander Lapshin clearly, at the suggestion of his Armenian "customers", published a post under the eloquent title: "Azerbaijan" pressed the Georgian Orthodox monastery in the border zone (Georgia ) ”(puerrtto.livejournal.com). And here are excerpts from this post, where Lapshin speaks directly about the “theoretical” - and in fact planned by the Armenian special services and provocateurs of the development of events around David Gareji.

“Now I’m standing exactly on the border line between the two countries, so ideally, one leg in Georgia, and the other in Azerbaijan. There is no fence here. Theoretically, Azerbaijanis can conduct aimed fire from this point on Georgian monks and tourists visiting the monastery. So far it has not come to this, but you understand, it is a matter of time and political situation ... ”

The key words here are “a matter of time and political environment”. The situation was clearly supposed to artificially inject. And bring it to fire.

“The main stumbling block is the small cave monastery of Udabno, located about 100 meters from the chapel, but to the left and below. Look attentively, the footpath descends, and in the same place the monastic cells and the cave church are cut down in the rock to the right. For centuries, Georgian Orthodox monks served there until suddenly Azerbaijan declared that it was their territory and the monks get out. Now there is a post of the Azerbaijani army and you can’t go through these 100 meters. They turned the caves into a fortified point and stand there with weapons. I do not know what instructions they have from above, but given the disrespect for someone else’s culture and feelings, as well as for human life (including one’s own), they will easily shoot at you from a machine gun. Therefore, be careful. ”

Here, Lapshin, distinguished, like his Armenian masters of wild Azerbaijani phobia, almost directly states that Azerbaijanis will shoot because, they say, they have “disrespect for foreign culture and feelings”. Apparently, his beloved Armenian nationalists are fascinating with everything that can be appropriated, and destroying everything that cannot be appropriated, a foreign culture and feelings are “strongly respected”.

Apparently, back in April 2019, the Armenian special services “provided instructions” to their agent Lapshin and told “in what way” to write a provocative blog about David Gareji. Then they shared their plans to provoke shooting from the Azerbaijani side. In the future, all over the world through the controlled media to trumpet that "Azerbaijanis are aimed fire at Georgian monks and tourists visiting the monastery." Just as April 29, "predicted in advance," and wrote Alexander Lapshin.

At least 2.5 months before the July 14 incident, the Armenian security services that finance Lapshin and send him “with tasks to potentially hot spots” have already developed a provocation scenario. And on July 14, 2019, among the provocateurs in David-Gareji, there were clearly crypto-Armenians and Armenian agents posing as “greater Georgians than Georgians themselves”.