Afghanistan and "chronological relationship" with separatist projects in the South Caucasus 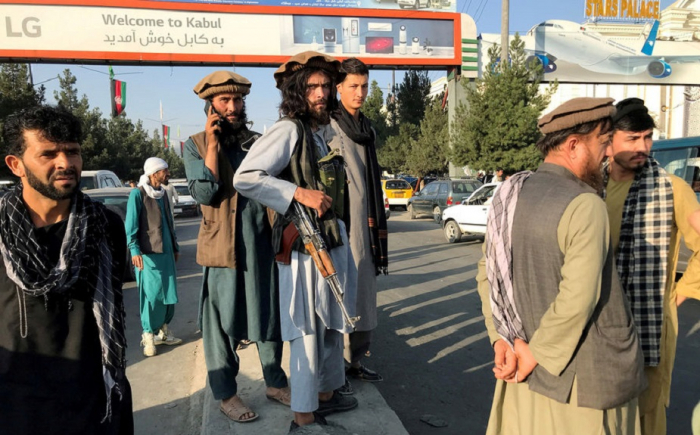 The swift development of events in Afghanistan confused many political scientists of the post-Soviet space, especially those who were not aware of the "ins and outs" of the processes. Russian propagandists are confused - on the one hand, it is necessary to rejoice at the next alleged "defeat of the United States", but on the other hand, far-sighted people are tormented by vague doubts.

The United States leaves Afghanistan, there remains a mass of weapons and two combat-ready armies (until recently, the pro-American Afghan troops and the Taliban, which merge into one "super army" under the control of the latter. And this "super army" (on the scale of the Middle East) for the United States and NATO countries is nothing It is not dangerous, but it stands on the borders of the zone of Russian interests.

Also in confusion are the separatists in Tskhinvali and Sukhumi. Some of them "in joy" have already begun to declare that they can recognize the Taliban, if the Taliban, in turn, recognize their "independence." But they were given a "strict suggestion" from Moscow and they quickly fell silent.

Meanwhile, the Afghan drama is much more closely tied to both Russia and the separatism it supports than it seems at first glance.
Let's remember how it all began. Withdrawing troops from Afghanistan, the USSR, and then Russia for a certain time supported its protege Mohammad Nazhibulla, who quite successfully fought against the "anti-Soviet" Mujahideen.

However, then the priorities of the Kremlin changed. It was decided to rely on pseudo-"great power" and support for separatism on the "stubs" of the former Soviet republics. The weapons went mainly to the Caucasus, primarily to the Armenian aggressors, who, thanks to this, managed to seize Azerbaijani Karabakh. Separatist projects were also organized jointly with the Armenian lobby in the Tskhinvali region and Abkhazia.

Ultimately, the war in Abkhazia against Georgia was organized by precisely those military specialists who had the experience of the war in Afghanistan, and whose help Najibula was desperately trying to maintain control over Afghanistan.

Aid to Najibullah's regime melted away as separatist movements in the Caucasus “unfolded” and then stopped altogether. It is interesting to trace the chronology: from January 1, 1992, Russia (as the legal successor of the USSR) stopped supplying all weapons and ammunition to the Afghan government forces. In the same year, Armenian nationalists who organized wild ethnic cleansing in Karabakh, in particular, the genocide of the Azerbaijani population in Khojaly in February 1992, will acquire these weapons and ammunition in huge quantities.

Then the separatists and all kinds of militants (including Armenian) will have a lot of weapons in Abkhazia, where the separatist war was unleashed by the same Kremlin and Armenian lobbies (it is interesting that the same Shevardnadze, when he was the head of the USSR Foreign Ministry, in every possible way persuaded the Kremlin authorities to rely on Najibullah ).

And in Afghanistan, under the influence of the Armenian lobby and foreign "well-wishers", the Kremlin "strategists" finally overthrew the miraculously held Najibullah, entering into an agreement with the "converted" mujahideen, in particular the Tajik Ahmad Shah Masud, and also forced to speak out against Najibullah Uzbek General Rashid Dostum. This was done again with an eye to “transferring the Caucasian separatist experience” to Afghanistan, using the “ethnic principle”. The Soviet and Russian special services everywhere tried to take primitive ethnonational "templates" as the basis. One way or another, but on April 28, 1992, detachments of mujahideen led by Ahmad Shah Massoud entered Kabul without a fight, overthrowing Najibullah, who took refuge in the UN mission.

But the intelligence services of other world powers relied not on ethnic and tribal ties, but on a more serious factor, namely religion. And the emergence of the Taliban movement clearly did not pass without their participation. The fact that it temporarily and partially got out of the control of those who "blessed" it is, so to speak, "the cost of the process." But those who relied on the Taliban very well "calculated" that in a multi-ethnic and multi-tribal Afghanistan only the religious factor can unite various strata of society. And the "longevity" of this project in the conditions that the Taliban were ousted from power for almost 20 years is the same indicator that it would have been created by not stupid people at all.

The Taliban's preaching of a return to Muslim values, as well as their decisive opposition to the arbitrariness of the "field commanders" who turned into banal bandits, resonated with the population. As a result, the Taliban very quickly established control over most of Afghanistan, and on September 27, 1996, the Taliban captured Kabul. Najibullah was captured and executed by them.

But the Mujahideen connected with the Russian special services, the same Ahmad Shah Massoud, managed to keep part of the northern regions of Afghanistan under control. A long civil war between the Taliban and the so-called. "Northern Alliance", during which the Russian Federation provided support to the latest weapons and military specialists.

“By a strange coincidence,” it was during this period that there was a relative “calm” in the Caucasus. And not only in Karabakh, Abkhazia, and the Tskhinvali region but also in Chechnya, wherein 1994-1996. The “boomerang of separatism” returned and struck at Russia itself, forming on its territory the unrecognized “state of Ichkeria”.

1998-1999 The Taliban significantly squeezed the Northern Alliance, and it was then that propaganda hysteria regarding the “Islamic threat” began to unfold in the Russian Federation “as if on command”. But it was directed not so much at Afghanistan as at the Caucasus. Against the background of this propaganda hype, a clear search for a "successor" to President Boris Yeltsin began. First, Sergei Stepashin was appointed prime minister, and "as if ordered" began to aggravate the situation in some mountainous regions of Dagestan.

But society did not perceive Stepashin as a "savior from the Islamic threat." Then, unexpectedly, the previously unknown head of the FSB, Vladimir Putin, became the head of government. Well, everyone remembers what happened next.

There were explosions in Moscow and Volgodonsk (and also RDX powder was found in Ryazan, but the case was hushed up), Putin said that he would “kill the terrorists, a hurray-patriotic hysteria and the second Chechen war began. And it was during this war that the "anti-Georgian" campaign began. Georgia was accused of "supporting terrorists" and the Russian society was gradually persuaded to believe that military intervention in Georgia was "necessary." At the same time, the Kremlin began to openly support the separatist regimes in Sukhumi and Tskhinvali.

The most interesting thing is that the scenario with the unwinding of propaganda hysteria in connection with the alleged "threat of Islamic terrorism" in the Russian Federation was repeated in the same sequence sometime later but on a global scale. The terrorist attacks of September 11, 2001, were organized, in which they immediately (without investigation) blamed the "terrorists entrenched in Afghanistan", which became the reason for the US invasion of this country and the establishment of a puppet pro-American regime based on the same Northern Alliance. How easily the United States “transformed with giblets” the former “friends” of the Russian special services show the “effectiveness” of their work in the interests of others. True, Ahmad Shah Massoud "by a strange coincidence" was killed 2 days before the September 11 terrorist attack by organizing an explosion in his residence.

At the same time, Vladimir Putin 100% supported the information "anti-terrorist" hysteria and the "official version" of the United States about the connection between the Taliban and the September 11 attacks. It was during this period that there was a wave of "Putin mania" in the West and a "fascination with Putin".

Those. There are many chances that the possibility of having “pocket separatists” playing fake “great power” was allowed to the Russian authorities in exchange for participating in a multi-step “game” where the notorious “Islamic terrorism” was declared a “world evil”. In the course of the fight against this "global evil", the United States has significantly expanded its spheres of geopolitical influence. And Afghanistan, where the Taliban banned the drug trade for a while, became one of the main drug producers under the pro-American administration, from which the same population of the Russian Federation suffered and is suffering. Of course, all this was done behind the scenes and illegally.

While the United States was “establishing democracy” in Afghanistan, the Russian Federation seriously “played around” with separatism and redrawing borders, which resulted in 2008 in aggression against Georgia, and in 2014-2015 in events in Ukraine, where Russia, following the strategy “ gnawing off pieces "amid jingoistic patriotic hysteria was dragged into the war. And according to some reports, she lost much more victims in the Donbas than in the Afghan war and in other local conflicts. And in 2015, under the pretext of fighting the same "Islamic terrorism", Russia was drawn into the war in Syria.

As a result, by 2020 the Russian Federation found itself in a “ring of fire”: with smoldering territorial conflicts and wars, plus sanctions for the annexation of Ukrainian territories. In such conditions, in 2020, the Russian Federation did not dare to intervene in the Karabakh war, despite the heart-rending "cries for help" of the Yerevan regime and the first separatist project in the South Caucasus - the so-called Artsakh.

The most interesting thing is that the de-occupation of Azerbaijani Karabakh happened exactly when the US administration (even under Donald Trump) decided to withdraw its troops from Afghanistan (the Joe Biden administration only accelerated this process). Perhaps this is "just a coincidence." But if we take into account how “synchronously” other events took place in the Caucasus and Afghanistan in previous decades, there are “too many” co-ownerships.

And today again Afghanistan and the South Caucasus, first of all, the separatist zones are connected as communicating vessels. The situation in Afghanistan hung like a sword of Damocles over the zone of Russian interests in Central Asia.

The Taliban themselves are unlikely to begin expansion northward. Well, first of all, Afghanistan can become a base for the opposition of the regimes in Central Asia (primarily in Tajikistan, which is a member of the CSTO). Secondly, there is a huge number of people in Afghanistan who have fought all previous years and do not know how to do anything else. You can always direct them “in the right direction”.

As a result, the Russian Federation simply will not have enough strength to "hold all the fronts." And in the near future, the question may arise of how to "dump the ballast" in the form of separatists and in return get at least a stable border in the Caucasus.

In such conditions, there is no talk of any support for the revanchist plans of the Armenian nationalists. This, apparently, is understood by Nikol Pashinyan, who is already changing his rhetoric towards the need to make peace with Azerbaijan. And again "by a strange coincidence" Pashinyan sharply "kinder" after the shots from Kabul, where you can observe the dramatic moments of the evacuation at the local airport.

Apparently, all such people have an understanding that having played with "irreconcilability" at a critical moment, one may not be able to catch the last plane and will not save attempts to cling to the landing gear. The same should be understood by the Sokhumi and Tskhinvali separatists - so as not to cling to the leaving tanks of the invaders at the last moment.