Armenia won't survive in the "illegal" borders of the Armenian SSR and will fight for the "Armenian" Abkhazia? 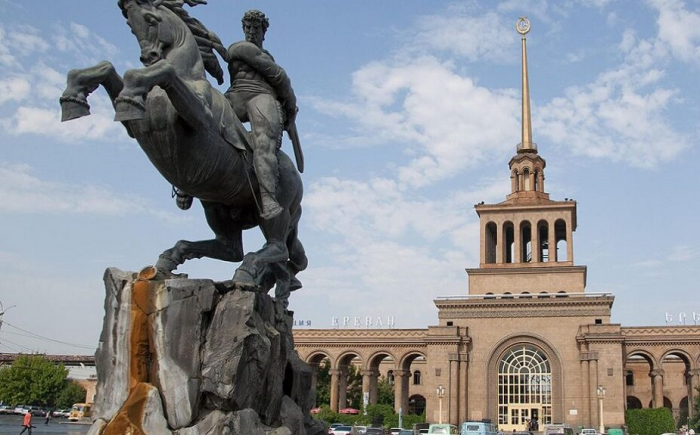 On the eve of the visit of Armenian Prime Minister Nikol Pashinyan to Georgia, Armenian nationalists in Yerevan try, in the days remaining before the visit, not to make anti-Georgian statements once again. But their adherents in the Russian Federation, who are most of all focused on revenge, dream of “Great Armenia” and, as before, on their information resources do not miss the opportunity to express their Georgianophobia.

Among them, the editor-in-chief of the Realist news agency Sarkis Tsaturyan is particularly aggressive, who directly states that Armenia does not intend to live within internationally recognized borders and will try to take away land from its neighbors in any way. Here is his editorial material on this matter with an eloquent headline: Armenia will not survive in the illegal borders of the Armenian SSR (https://realtribune.ru/armeniya-ne-vyzhivet-v-nezakonnyh-granicah-armyanskoj-ssr). Outraged by the upcoming delimitation of borders with Azerbaijan, Sarkis Tsaturyan is indignant:

“The blocking of the Goris-Kapan road by the bandit formations of the minisultanate showed that Armenia has no chance of survival in the illegal borders of the Armenian SSR. Ilham Aliyev took and unauthorizedly blocked land transport links with Iran. Pashinyan's cabinet, contrary to common sense and international law, agreed to "delimitation" within the borders of the Armenian SSR. We sat down at the table with cheaters to play cards that these cheats themselves drew 100 years ago. The rudiment of Turkish-Bolshevik colonialism is being imposed on our people again. It is a priori impossible to win anything in such negotiations, since the opponent sets the coordinate system. Armenia, however, still refuses to proclaim itself the legal successor of the First Armenian Republic. And all, without exception, the leaders of Armenia, from Ter-Petrosyan to Pashinyan, are to blame for this.

We have yet to gain genuine political independence. The Armenian people have a legal right to a country mansion, but its rulers agree from a legal point of view to live in a communal apartment, illegally inhabited by robbers ... "

And of course, for Armenian nationalists, the best "country mansion" is the land on the Black Sea coast, in Georgian Abkhazia, where Armenians have already become the majority.

Sakis Tsaturyan directly on this account on his website makes hints that other Armenian nationalists "at a glance" understand. It is no coincidence that the same day - August 27, 2021, together with the editorial material of Sarkis Tsatryan regarding the fact that they say Armenia will not survive within the borders of the Armenian SSR, the same IA "Realist" published an article by the defender of the Sukhumi and Tskhinvali separatists Maxim Vaskov. Under the title "The struggle for the sovereignty of Abkhazia is not over." (https://realtribune.ru/borba-za-suverenitet-abhazii-ne-okonchena).

This article by Maxim Vaskov, according to the information posted on the website of the director and scientific director of the Center for International Studies "World of the Caucasus" (which, judging by its appearance, is directly related not so much to the Russians as to the "ancient long-suffering people), is simply saturated with the most notorious Georgianophobia:

“… The struggle for the sovereignty of Abkhazia is not over as long as there is a state striving for revenge. We must not forget the goals that the Georgian leadership has set and is setting for itself. This is not just "return" Abkhazia to the Georgian statehood, but this is the destruction of its people. The Georgian side softened its rhetoric due to external reasons, but the strategic essence has not changed. The defeat of the Georgian aggression in 2008 led to a temporary rejection of military revenge at the level of political rhetoric and the promotion of projects for the so-called "engagement through cooperation." In this regard, “soft power” and efforts aimed at disintegrating society, including through the work of NGOs, come to the fore on the part of Georgia. However, the centuries-old history shows that such “peaceful projects of engagement through cooperation” and “non-violence” will only exist as long as the role of Russia as a military-political force and a key factor in ensuring security in the region remains. Without the Russian factor, the Georgian side will immediately return to the policy of forceful diktat, ethnic cleansing, and, ultimately, genocide. There have already been enough examples of this in the history of Abkhazia and South Ossetia.

The Abkhazian and Ossetian peoples should not count on a better attitude towards themselves than the one that Georgia showed last year towards Armenia and "Artsakh". Then Georgia violated its declared neutrality and ensured the supply of military supplies for Azerbaijan through its territory while declaring the need for good-neighborly relations with Armenia ...

This passage shows what hatred aroused among the "sponsors" of Vaskov, the Armenian nationalists, for the constructive position of Georgia, which did not allow the transfer of weapons and militants to Armenia during the Second Karabakh War.

At the suggestion of Armenian nationalists, the author of the article, which calls for "fighting for the sovereignty of Abkhazia" and directly calls Georgia an enemy. And, of course, the Armenian nationalists do not intend to "fight for the sovereignty of Abkhazia" at all in the interests of the dying out and decreasing numbers in the face of the influx of Armenian settlers of the Abkhaz people. Although they seem to be very "worried" about him. And first of all, they worry that the Abkhazians are not reconciled with the brotherly Georgian people. Scaring them with "genocide". And for some reason, frightening with Turkey, where tens of thousands of Abkhazians expelled by the Russian Empire found shelter. And no one there "genocide" them, in contrast to the Russian Empire.

A very strange "experience". What do you care, gentlemen "realists" - Armenian nationalists to the point that the Abkhaz want to improve relations with the Georgians? What does the same Maxim Vaskov "warn" them against? Or is it only the Armenians who can go to Georgia, have a rest at its resorts, are treated in Georgian hospitals, and the Abkhazian people, brotherly for Georgians, who were deceived by the Armenian provocateurs with the Georgians, cannot?

The goal of the Armenian nationalists in relation to Georgian Abkhazia is obvious. They plan to make Abkhazia completely "theirs". Armenian. Have there "country mansions" by the sea. And the site of Sarkis Tsaturyan is directly working in this direction.