Why does France need 'Great Armenia' and how does it threaten Georgia? 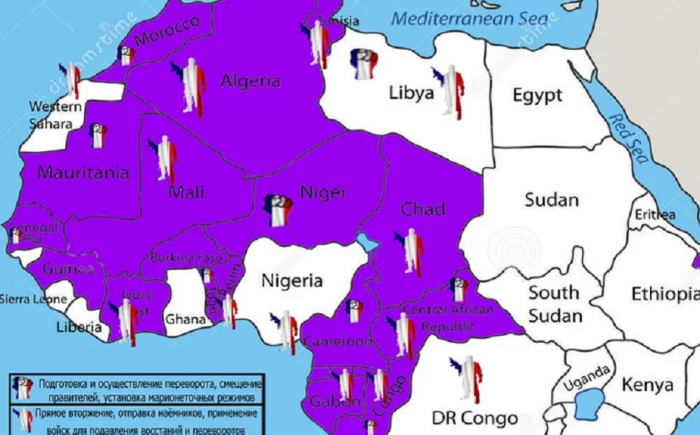 It's no secret that France openly demonstrates its support for Armenia, moreover, for its destructive, aggressive steps and a policy of revanchism directed against its neighbors. In early July 2021, France and Armenia held talks on military cooperation. Agreements were reached on the provision of military assistance to Yerevan by Paris. At the same time, in Armenia they openly talk about the desirability of replacing the Russian military in Armenia with French ones.

Why Armenia needs support from France and the desire to get French troops on its territory is understandable. The Yerevan regime wants to fight and build a "great Armenia". As always with someone else's hands. If the Russians refuse to do this for the Armenian nationalists, now the hope is for the French.

But why exactly France needs Armenia with its revanchism and claims to foreign territories, not everyone fully understands. Moreover, the "altruism" and "sacrifice" of French politics have never been characteristic.
The French calmly "threw" and betrayed much more significant allies for them than the Armenians (which is only the "surrender" of Czechoslovakia in 1938 and, in fact, the betrayal of Poland in 1939). And here it turns out that the French are ready to fight and die for "great Armenia"? How realistic is this and why is it for Paris? Let's try to deal with this issue.

Of course, the 700-thousand Armenian population of France is also important, whose votes decide a lot in the presidential elections, and the same Macron is clearly flirting with the Armenian community. The confrontation between France and Turkey, which has strengthened in the region after the Karabakh war, and the fact that Paris cannot share influence in the Mediterranean with Ankara, is also significant. Also understandable is Macron's desire to show himself as the new leader of the EU, achieving success in foreign policy. But this is not the only thing that matters.

As you know, the former colonial empires in the current world have not disappeared anywhere. Moreover, the ability to use the resources of the former colonies determines both the “status” of the former metropolis and its elite in the processes of globalization. Until recently, France also managed to exploit a significant part of its former colonies, primarily in Africa.

A huge "piece" of the African continent, which in colonial times belonged to France until recently, almost monopolistically, was exploited by French companies. The financial system of these countries is also integrated with the French one.

Moreover, in connection with France, the so-called. The "Economic Community of Central African Countries" included states that were not French colonies, moreover, huge countries. Among them are the nearly 100 million Democratic Republic of the Congo (the former Belgian colony), the former Portuguese colony of Angola, rich in oil and other minerals, as well as the former Belgian Rwanda and Burundi. The former Portuguese colony of Guinea-Bissau joined another pro-French association, the West African Economic and Monetary Union.

The elite of many French-influenced African countries and their various dictators traditionally created "reserve airfields" in France, bringing families here and transferring funds received from assisting the same French corporations in plundering their countries into accounts in French banks. In case of attempts of this or that state to escape from the French influence, the French troops, in particular, the "foreign legion", enter into action and simply either change the power in this or that African country, or support the pro-French dictators in power.

However, the situation in the world is changing. No matter how hard France tries, it is simply forced to admit capital from countries beyond its control into its former colonies. The same Chinese. Chinese companies "climb" into those areas where the French recently felt confident. In the same mining. Of course, official Beijing today does not quarrel with official Paris, but the fact that the economic monopoly of the former metropolis has been broken is important. It is not always possible to have China as the main foreign trade partner, and at the same time blindly obey France in everything.

Furthermore. Politically, the same "French Africa" ​​is also being "divided". And the African countries themselves are beginning to understand that it is less and less profitable for them to be guided by Paris. They are beginning to reorient themselves to other geopolitical centers.
The moment comes when Paris begins to realize that the "fixation" of the French neo-colonial empire only on Africa, with the loss of French influence in other parts of the world, will sooner or later lead to the fact that Africa will be taken away from Paris. Therefore, the question arises of creating "zones of French influence" in other regions of the world. Desirable "on the path of global communications." And where France has not so many opportunities.

The former French Indochina (now Vietnam, Laos, and Cambodia) has been politically lost to the Faction for a long time. And economically - too. The "famous" US war in Vietnam was just an attempt to "replace" the French colonialists in this region. Thus, France would have retained at least some influence in the region, "sharing" it with the United States, but this war ended in defeat long ago. The tiny island possessions of France, scattered around the world, also cannot serve as full-fledged "bases of influence", since they are not tied to large self-sufficient continental territories.

Hence, France's feverish attempts to regain "footholds of influence" in Eurasia, a region on which the future of the globalizing world will depend much more than Africa. And here it turns out that, apart from Armenia, France simply has no other contenders for the "bridgehead".

However, isolated and landlocked Armenia is an inherently vulnerable foothold. Therefore, if, nevertheless, France dares to “make a key stake” on Armenia, then it will not succeed without full control over Georgia. Then it will not make sense to send troops to Armenia, because they initially find themselves "trapped".

But how can France ensure control over Georgia, if it is in the interests of Georgia as a sovereign country and the Georgian people to develop friendly relations with neighboring states? Including those who do not like such destructive geopolitical games in Paris?

Hence the conclusion that the strengthening of France in Armenia will inevitably lead to the fact that the Armenian nationalists will be given over to Georgia. Moreover, they themselves declare claims to Georgian lands and to Georgian shrines and, in fact, have made “seaside Armenia” out of occupied Abkhazia.

If France seriously and decisively relies on Armenia as its "military foothold" in Eurasia, then the fate of Georgia will be in jeopardy. After all, if, under the influence of the Armenian lobby, an extremely hostile policy against Georgia began to be carried out by the same faith to Georgians Russia, then one should not expect "mercy" from the culturally and mentally much more distant France.

In addition to the already occupied territories, new lands may be taken away from Georgia, primarily Samtskhe-Jvakheti, in order to provide a "corridor" for Armenia to the Black Sea. Georgia can be generally dismembered and destroyed as a single sovereign state. Moreover, the destruction of Georgia is the "fix idea" of Armenian nationalists. It is enough to read any pro-Armenian edition in Russia - wherever they write about Georgia, they bring up the issue of its dismemberment.

Military cooperation between Paris and Yerevan directly affects Georgia and carries a potential threat to the security of the Georgian state and its territorial integrity.