The plunder of the Azerbaijani subsoil does not stop. Who will pay for it? 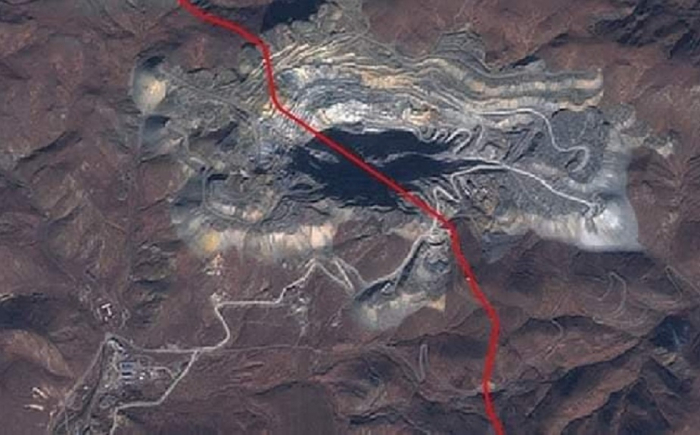 Even after the liberation from the occupation of Azerbaijani Karabakh, in particular, the Kelbajar region, the plunder of its bowels of Azerbaijan in the interests of Armenia continues. This became obvious when, due to the provocation of the Armenian military on the border between Armenia and Azerbaijan, GeoProMining Gold announced on August 17, 2021, that it was temporarily stopping work at the Zod (Sotk) gold mine, which is located “right on the border,” and evacuated about 200 workers. However, on Wednesday, August 18, 2021, the representative of GeoProMining Gold Armenia, Ruzanna Grigoryan, stated that the Zod (Sotk) gold mine resumed its work.

But the fact of the matter is that this mine cannot work in principle without violating the border of Azerbaijan and without illegal robbery of the Azerbaijani subsoil. Indeed, the border "cuts" the mine. However, most of it is located on the territory of Azerbaijan. And it is enough to look at the satellite image, as you can see that the dump trucks developing the mine are going "in a circle" taking out ore from the "bottom" of the open pit, this is how the mine roads go in a "spiral". Not only that, most of this "bottom" of the mine is located on the internationally recognized territory of Azerbaijan, transporting ore (Azerbaijani) trucks "spiraling" from the bottom of the mine, enter the Azerbaijani territory and only then bring the ore to Armenia. It is impossible to export ore directly to Armenia even from the hypothetically "Armenian" part of the mine (which can be determined only after demarcation of the border) without entering the Azerbaijani territory, in principle, it is clearly visible on the satellite map that the direct road "to the Armenian end of the mine" from Armenia simply no.

Those. without demarcation and delimitation of the border, when it will be clearly clarified where the ore is Azerbaijani and where is Armenian, the operation of the mine is impossible in principle. Even if there are friendly and good-neighborly relations between the countries. Moreover, “from the Armenian side” the deposit has long been depleted, and now, in fact, GeoProMining is working on the theft of Azerbaijani ore.

But the fact that it is impossible to plunder other people's bowels with impunity is not obvious. This creates a dangerous international precedent. So any state can seize the territory of another, "develop" the richest and most valuable mineral deposits and "return" the devastated subsoil.

Therefore, lawsuits against the marauding company GeoProMining, which illegally developed the Azerbaijani subsoil in the interests of the Armenian invaders, will and should be mandatory. Experts should study the amount of damage done and insert an "account" for the looters. Both to the state of Armenia and the GeoProMining company and its owners, both former and current. If they cannot compensate for the damage, their assets should be seized all over the world.

GeoProMining was founded in 2001 by Russian businessman Siman Povarenkin. The company has assets in Russia, where it mines gold and antimony, and in Armenia, as well as in the occupied Azerbaijani territories, where it mined and, as we can see, is still extracting gold, silver, copper and molybdenum.

The memorandum for the issue of Eurobonds in 2019 stated that in the first quarter of 2019, GeoProMining produced about 46.7 thousand ounces of gold, 1933 tons of copper, 103 tons of molybdenum and 1932 tons of antimony. In terms of gold equivalent, production then increased by 23.2%, to 69.2 thousand ounces, compared to the first quarter of 2018.

Consolidated revenue of GeoProMining in January-March 2019 increased by 16.7% compared to the same period last year, to $ 83.7 million. It is easy to calculate that the company's annual revenues were at least $ 300 million. queue for the robbery of the Azerbaijani subsoil.

Interestingly, on the eve of the Second Karabakh War, Siman Povarenkin sold his stake in GeoProMining to another Russian businessman, Roman Trotsenko. However, this does not relieve Povarenkin of responsibility for participating in the long-term robbery of the Azerbaijani subsoil, since it was on this that he knocked out his fortune.

The bad news is that even international rating agencies have turned a blind eye to robbery and looting in relation to the Azerbaijani subsoil for years. And only after the liberation of Azerbaijani Karabakh did they become “worried”.

So, after the Second Karabakh War, information appeared that S&P Global Ratings may downgrade the credit rating of the Russian company GeoProMining (GPM, GeoProMining LLC) "due to uncertainty about the main assets," as the agency said. The agency stated that in November 2020, within the framework of the ceasefire agreement, Armenia agreed to return to Azerbaijan several “disputed territories that it controlled since 1994” (this is how the agency cynically called the occupied Azerbaijani lands. ”The“ new border ”between the countries has not yet been determined, but the main asset of GeoProMining - the Zodskoe (Sotskoe) field, will be divided by the border, ”S&P Global Ratings reported.

“The outcome of the conflict between Azerbaijan and Armenia over the GPM is extremely difficult to predict, with a range of outcomes ranging from limited exposure to complete loss of an asset that generates over 75% of the company's EBITDA,” S&P said.

According to S&P, as of December 2020, GeoProMining was still operating “about half of the mine” and all of its processing facilities. But as we indicated above, "to exploit half of the mine" despite the fact that in reality most of it is located on Azerbaijani territory and without violating the border, the operation of the mine is impossible - in reality, it is impossible.

“We do not expect an immediate shutdown at the mine as the company has full access to the processing facilities, as well as all machinery and equipment, and has approximately three months of ore reserves. But negative scenarios should not be ruled out, ”the S&P said in a statement.

The fact that the "ore reserves for three months" are 100% stolen from Azerbaijan did not bother the S&P agency for some reason. It was also not embarrassing that, according to all the laws of international law, GeoProMining must compensate Azerbaijan for damage from the illegal development of a gold deposit.

In principle, the former owner of GeoProMining, Siman Povarenkkin, already had problems with the law, and not just anywhere, but in the UK. So at the beginning of 2017, Povarenkin once again flew to Heathrow Airport. The businessman was heading for the birthday of his wife and child residing in the UK. However, as soon as Povarenkin got off the plane, he was handed a summons to the High Court of London and a statement of claim. In the latter, Povarenkin's former business partner, Ruslan Bestolov, claimed that he owed him $ 7.5 million for participating in two ore projects in Yakutia. This was a precedent for British law. Despite the fact that Povarenkin was not a citizen of the United Kingdom, the court considered him a local resident. Just due to the fact that since 2013 a businessman has had the right to temporary residence in England on a business visa from his wife.

Questions from the British authorities to Povarenkin arose not only because of a business conflict with partners. According to journalists, London's interest in his person is explained by Povarenkin's possible connections with businessman Arron Banks. Banks was the main sponsor of the UK referendum to leave the European Union. According to The Times, he has spent about £ 8m on campaigning for Brexit. This generosity was partly attributed to the British media by "the influence of Russian officials."

According to The Guardian, Banks met three times in 2015-2016 with the Russian Ambassador to Great Britain Alexander Yakovenko. At one of the meetings, Yakovenko introduced the Briton to Povarenkin, who is on the business council under the Russian post. It was discussed at the meeting that Banks could participate in the purchase of gold deposits in Siberia, which belonged to Povarenkin. The deal could potentially bring billions of dollars to the Brexit supporter, it follows from the documents cited by the publication.

Povarenkin himself claimed to The Bell that he did not conduct any negotiations with Banks, but only made a brief overview of the Russian gold market for the British at one of the meetings at the Russian embassy in London.

Banks testified about ties with Russia before British parliamentarians. He stated that the deal with Povarenkin never took place. “Business is constant communication. But if you had lunch with someone and discussed something, this does not mean that you have a joint business, ”said the British businessman, adding that he has no business in Russia. British media claimed that Arron Banks continued to discuss a possible deal with Povarenkin and, after meeting in London, even flew to Moscow in February 2016. Banks later denied the trip.

The Guardian called Povarenkin a classic "minigarch" that conducts business in the usual way for Russia under the guise of an influential "roof". The publication also claimed that the businessman is close to the Kremlin (which, in principle, is not surprising, since without "proximity to the Kremlin" it is impossible to conduct business in the Russian Federation, and even more so with "allies" - marauders.)

In 2017, the West still tried not to raise the issue of the illegal occupation of Azerbaijani territories by Armenia. Therefore, considering the "intrigues of Povarenkin" in relation to the same Brexit (clearly exaggerated. Povarenkin is not such a figure to have a decisive influence on such an epoch-making event), for some reason, they turned a blind eye to his real crimes of robbing the Azerbaijani subsoil. Although, to all appearances, it was after having problems with British legislation that Siman Povarenkin decided to “get rid of toxic assets” and sell his stake in GeoProMining as soon as possible.

Now the geopolitical situation has changed. Azerbaijan's liberation of its internationally recognized territories raises the question of who was the “beneficiary” of the long-term occupation and who should pay for the damage from this occupation. Azerbaijan's claim against Armenia, the GeoProMining company, its former owner Siman Povarennkin and related persons and structures may have a significant geopolitical resonance.