Connections of 'Artsakh', 'Javakkh', Tskhinvali, and Sukhumi separatists in the canvas of Russia's modernization of the Armenian Armed Forces - Georgia may be the main target 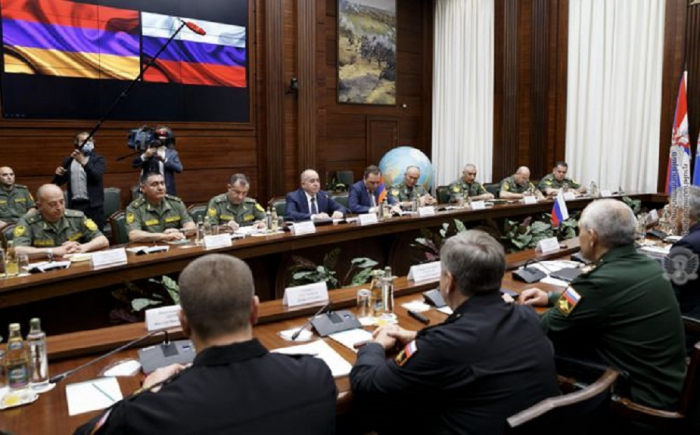 The most gloomy assumptions are beginning to come true that Russian "peacekeepers" in Azerbaijani Karabakh can play approximately the same role as Russian "peacekeepers" in 2008 in Georgian Abkhazia and the Tskhinvali region. Those. they will be engaged not so much in restoring peace and law and order with ensuring the territorial integrity of a sovereign state, as in provoking a new war and the occupation of foreign territories.

On November 9, 2020, following the results of the Second Karabakh War, a trilateral statement was signed by Russian President Vladimir Putin, Azerbaijani President Ilham Aliyev, and Armenian Prime Minister Nikol Pashinyan, which made it possible to achieve a complete cessation of hostilities in the conflict zone. For the peaceful reintegration of a part of the territory of Azerbaijani Karabakh inhabited by ethnic Armenians here, as well as in the area of ​​the Lachin corridor, Russian peacekeepers were deployed for a period of 5 years.

At the same time, an agreement was reached on the unconditional disarmament of all illegal separatist formations, primarily the so-called. "Artsakh Defense Army", which was nothing more than the occupation units of the Armenian Armed Forces on the territory of Azerbaijan. Also, instead of the existence of the Lachin corridor, communications through Zangezur, connecting the main part of Azerbaijan with the Nakhichevan Autonomous Republic, were to be unblocked.

However, the Zangezur corridor has not yet begun to function and the Armenian side is arranging regular military provocations on the border with Azerbaijan to disrupt the agreements on this corridor. Until now, the disarmament of the "Artsakh" bandit formations has not taken place, on the contrary, there has been a "call-up" of young people from among the residents of Karabakh of Armenian nationality to these formations.

At the same time, units of the Armed Forces of Armenia are almost openly transferred to Azerbaijani Karabakh. The Azerbaijani Defense Ministry has officially announced that Armenia is illegally placing the personnel of the Armenian Armed Forces in the zone of responsibility of the Russian peacekeepers in Karabakh.

“In recent days, there have been cases of redeployment by Armenia in violation of the trilateral statement [of November 9, 2020] of the personnel of its armed forces to the Azerbaijani territories, where the peacekeeping forces of the Russian Federation are temporarily deployed, the establishment of new Armenian military posts near the settlements of Mukhtarkand, Shushakend, as well as in the territories in the eastern direction of the administrative borders of the Kelbajar and Lachin regions, ”reads the message of the Azerbaijani Defense Ministry issued on August 11, 2021.

The report also notes that the Azerbaijani army "is taking adequate measures and does not allow such cases." According to the Azerbaijani Defense Ministry, the Armenian side "purposefully resorts to such provocations to escalate tensions."

“All this is happening against the background of the irresponsible and inflammatory order of the new Armenian Defense Minister Arshak Karapetyan to the Armenian army on the use of force using all means,” the message says.

The message emphasizes that the Azerbaijani army "will ensure the adoption of all adequate measures."

"The peacekeeping forces of the Russian Federation, by the provisions of the trilateral statement, must put an end to the cases of the deployment of the Armed Forces of Armenia in the Azerbaijani territories, where they are temporarily deployed," the Azerbaijani Defense Ministry said.

Unfortunately, Russia not only does not put in its place its "presumptuous ally", but actively recreates the Armenian army, which was practically destroyed during the 44-day war. And the latest visit of the new Minister of Defense of Armenia Arshak Karapetyan to Moscow only confirms this.

“We attach great importance to the development of our cooperation in the military field, both in the bilateral format and within the framework of the CSTO. At the same time, we are ready to continue to assist in the implementation of the program on reforming the Armed Forces of Armenia. It is not an easy task, but I think that with your experience it will be up to the mark,” Shoigu said.

In response, Arshak Karapetyan stated that "Russia is the only state that provides a real tangible product of security for the Armenian people and today deals with security issues not only in Nagorno-Karabakh but also directly on the borders of Armenia." Those. again, in essence, the question is raised that Russia should facilitate the illegal presence of the Armenian Armed Forces on the territory of a neighboring country.

Sergei Shoigu also noted that the 102nd Russian military base is located on the territory of the Republic of Armenia, which is well equipped and is a "security guarantor".

“Armenia is an ally and key partner of Russia in ensuring security in the Transcaucasus, and we are extremely interested in maintaining stability in this region,” the Russian Defense Minister said.

It should be noted here that the strengthening of the 102nd Russian military base stationed near the Georgian border in Gyumri poses a threat, primarily to Georgian statehood (during the 2008 war, the Russian Air Force took off from airfields in Armenia to bomb the territory of Georgia). As well as the fact that the Armenian armed forces are quietly moving under the cover of Russian "peacekeepers" on the territory of neighboring states. This means that new aggression against Georgia by Russia and its “allied” Armenia is possible. Moreover, according to the demographic structure of the population, before our eyes, Georgian Abkhazia is turning into “another Armenia”, and the Armenian separatists in Samtskhe-Javkheti openly say that the “Artsakh” scenario can be realized about this region of Georgia.

The question arises, what is this if not the impudent intervention of same Armenia in the internal affairs of Georgia? And what can the Tskhinvali and "Artsakh's" separatists discuss besides actions against the sovereignty and territorial integrity of Georgia with the help of Russia?