According to MIA, 100 people have been administratively detained for the facts of violations during a rally near the parliament yesterday, among them 68 were released on the basis of the acknowledgement, while 32 remain in temporary detention isolator 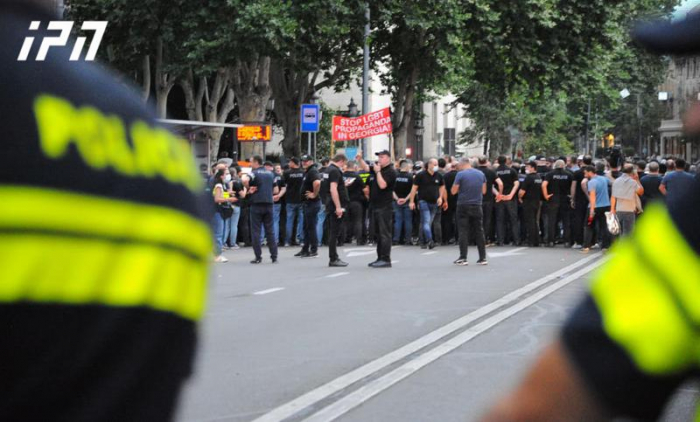 On July 6 the current year, the gathering of some citizens protesting against the manifestation in front of the Parliament exceeded the limits of the law on freedom of expression and peaceful assembly. The manifestation of people gathered in vicinities of the First Classical Gymnasium and the Kashveti Temple developed in a violent manner, - reports the Ministry of Internal Affairs.

"At this stage, 100 people have been administratively detained for the facts of violations exposed by the employees of the Ministry of Internal Affairs. Among them 68 were released on the basis of the acknowledgement, while 32 remain in temporary detention isolator. Patrol police officers arrested 2 citizens at the scene as the accused persons. I.Kh. (DoB 1989) was arrested for violence against "Palitra News" cameraman and unlawful interference with the journalist’s professional activities. The investigation is in progress under Articles 154, Part II and 126 envisaged by the Criminal Code of Georgia. As for the second detainee - G.Sh. (DoB1965) damaged the side windshield of a patrol police vehicle. Investigation is in progress on the fact of damage or destruction of another person’s property committed on purpose under Article 187 of the Criminal Code of Georgia. During both manifestations on Rustaveli Avenue, the police took all appropriate measures defined by the law so that the expression of protest was held in the most peaceful environment. Regardless of numerous calls, demonstrators offered resistance to the representatives of the Ministry of Internal Affairs, threw various objects, as a result of which three law enforcement officers were injured. Owning to the violent actions, police vehicles were also damaged. The Ministry of Internal Affairs will make a relevant legal assessment with regard to the illegal actions exposed on July 6 on Rustaveli Avenue. Each fact of violation will be responded accordingly by the representatives of the Ministry of Internal Affairs", - reads the statement.