Salome Zurabishvil: While Abkhazia and South Ossetia no longer make world headlines, it remains an open wound for every single citizen of Georgia 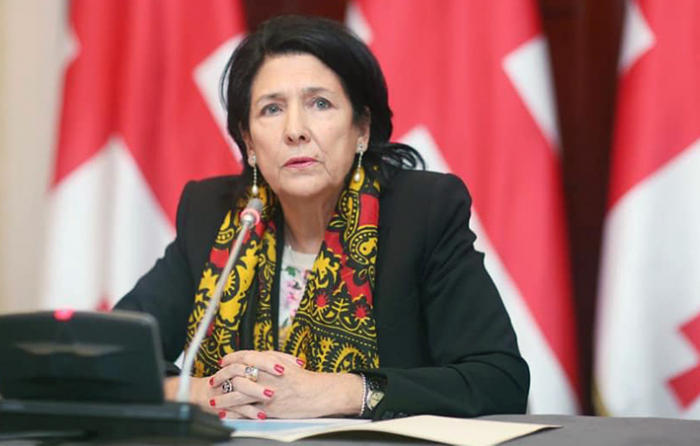 Georgia’s President Salome Zurabishvili said that Georgia needs to implement three of the most needed institutional reforms, which require political support and practical assistance from the EU and its member states. President said in that regard in her speech at the International Conference “Ten years of Valued Partnership – Passed Way and Perspectives” taking place in Batumi city of Adjara region.

“As the President I will guarantee that we continue our process in three essential directions. First, we will need to implement much three needed institutional reforms which will require political support and practical assistance from the EU and its Member States. Those three directions are: The fourth wave of reforms of judicial system, which is essential to further increase the confidence of the Georgian people in an independent court system and further strengthen the rule of law; Public administration reform, which is needed to ensure a highly professional and stable civil service; And our anti-corruption strategy will ensure higher transparency and accountability of governmental institutions”,  – Salome Zurabishvili said.

“Secondly, we will continue to promote political dialogue and unity in the political space which has been my motto since I was elected. In this regard, the decision of the ruling party, in answer to public demands, to move to a fully proportional system in the 2020 elections will mark a landmark. It will make Parliament more representative by ensuring the inclusion of broader parts of the society in politics. And it will certainly help to overcome the Soviet legacy of one party – one-person rule, as it may well result, at one point in time, in the country getting its first coalition government. In any case Georgia will begin to institutionally resemble any other European parliamentary democracy.

Third, we will strive to implement most if not all of the OSCE’s recommendations to refine the electoral process ahead of the 2020 elections. Each election must see progress and strive to meet the European threshold.

Unfortunately, our European destiny cannot fully ignore geography.  On August 8th , we will mark the 11th  anniversary of the war which has resulted in occupation of 20% of our territory. If this was meant to move us away from our European path, the resilience of Georgia has been our strategic response.

While Abkhazia and South Ossetia no longer make world headlines, it remains an open wound for every single citizen of Georgia. This is an issue that cannot nor will go away. The popular demonstrations that took place on June 20th were a natural expression of what has been brewing for a decade: on the one hand, popular outrage against the illegal occupation of a sovereign Nation; on the other, frustration with the lack of political progress towards reunification”, – President said.