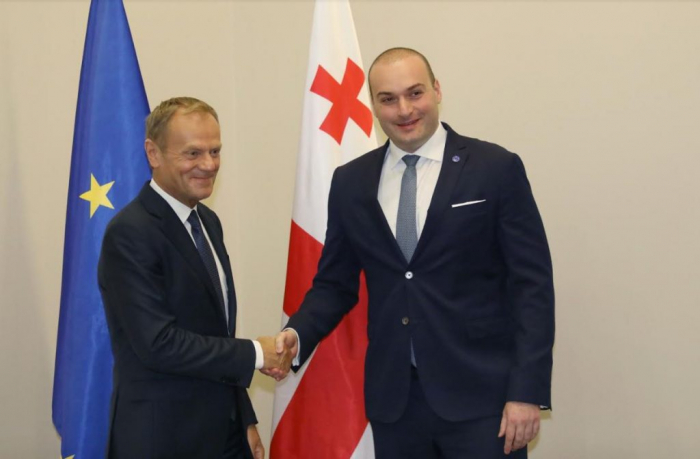 Georgia is a significant partner of the European Union, with its associated freedom and courage. It was announced by Donald Tusk, President of the European Council at a meeting with Mamuka Bakhtadze, Prime Minister of Georgia held in Batumi today.

Head of Government of Georgia expressed his gratitude to the visiting European dignitary for participation in the key-note international conference and noted that authorities of the country highly appreciate the messages heard from Donald Tusk today.

Parties discussed the success stories and achievements made during the 10 years of Eastern Partnership and noted that Georgia is a leader of this platform.

Significant progress achieved by Georgia towards European integration has been stressed, including the Association Agreement (AA) and Deep and Comprehensive Free Trade Area (DCFTA), along with a visa-free travel granted to the citizens of Georgia.

Head of Government of Georgia noted that European aspirations of Georgia are not a mere political decision, but rather a value-based civilizational choice of the Georgian people.

Focus was made on the significance of sectoral integration with the EU and formats anticipated to support this process. Roadmap2EU developed by the Government of Georgia was referred within this context.

Discussions were related to the security partnership and role of the Black Sea Security in ensuring the overall European security.

Prime Minister of Georgia reaffirmed the EU in the commitment made by Georgia towards the goals of Eastern Partnership and stressed the need to do more. In the opinion of the Head of Government of Georgia, it is important to maintain the momentum in bilateral relations and to identify new, additional opportunities for the European integration of Georgia.

Parties focused on the grave violations of human rights at the occupied territories of Georgia and Peace Initiative of the country branded as a Step2BetterFuture. President of the European Council stressed the solid support towards territorial integrity and sovereignty of Georgia within the internationally recognized borders.