Donald Tusk: I feel that Georgia has a very good and promising future 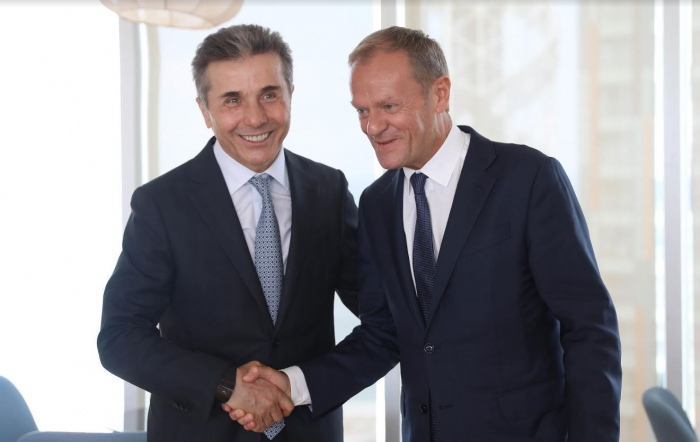 The head of the ruling team hosted the President of the European Council in Batumi city of Adjara region.

Bidzina Ivanishvili thanked Donald Tusk for friendship with Georgia and noted that the visit of a such number of high-ranking guests in Batumi once again demonstrates that Georgia is developing in the right direction.

The President of the European Council assessed the meeting with the leader of the ruling party as an interesting and impressive and expressed hope that with joint efforts Georgia will still succeed.

“Mr. Chairman, Thank you very much for a very interesting meeting. As you know, I started my visit to Batumi with my opening speech at the conference dedicated to the 10th anniversary of the establishment of the Eastern Partnership Initiative. Then I continued with the meetings with the President, Prime Minister, and leaders I of the opposition and now with the leader of the ruling party. It was very interesting and inspiring meeting. Today, after meeting with you, your opponents, the government members and the president, I feel very good and promising future despite current problems of Georgia. We have made very open and frank comments on the current situation. I am absolutely sure that as long as you are united as a nation and you are ready to cat together, despite differences and political debates, you can be optimistic. Thank you very much for this visit. Thanks to Georgian people and Georgia. I think everything in Georgia is perfect”, – Donald Tusk said.

For his part, the Chairman of the ruling party recalled the first meeting with Donald Tusk when he served as Prime Minister and underlined the fact that the President of the European Council is a good friend of Georgia.

“Donald Tusk is a good friend of Georgia. We were particularly pleased when he read the Vazha Pshavela’s words in the Georgian language. He fascinated the whole Georgia and I personally expressed my gratitude toward him…Today so many friends, so many European and dearest guests arrived in Georgia. This once more demonstrates that Georgia is developing in the right direction and we will continue this path to Europe, to Euro-Atlantic space and we are firmly committed to this direction”, – Bidzina Ivanishvili said.