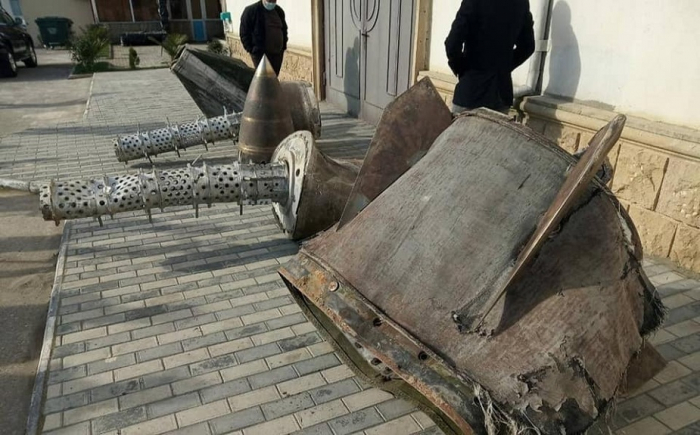 The scandal associated with the discovery in the Azerbaijani city of Shusha of parts of Iskander missiles launched from the territory of Armenia is gaining international resonance.

The Azerbaijan State Agency for Mine Action ANAMA has presented the remains of the Iskander missile found in Shusha to the public. The markings on the missile are not of the nature for the "export" version, which the Russian Federation supplies, including to Armenia, but corresponds to the modification that is in service with the Russian army "Iskander M".

It is interesting that the disclosure of the find was preceded by bravura statements by a part of Armenian propagandists (such as Semyon Pegov) about how Armenia allegedly hit the bunker in Shusha with an “accurate blow” from the Iskander and destroyed “over 500 Turks”. As it turned out, the remnants of the rocket were found in a sparsely populated part of Shushi, where there were no bunkers, and the Iskander launch did not cause any special damage to the Azerbaijani army. However, this raised even more questions.

If Iskander M missiles were massively used and exploded, this could radically change the nature of the “final stage” of the second Karabakh war. As you know, the export version, which was in the arsenal of the Armenians "Iskander-E" has a range of up to 280 km and relatively modest damaging characteristics. The Iskander M modification has a range of over 500 kilometers and can be equipped with cluster munitions, which give massive destruction of enemy personnel in a fairly large radius.

But there is another big BUT! The use of Iskander-M missiles as an effective and destructive weapon is, in principle, impossible without the participation of the producing country; without Russia, even if the Armenians somehow gained access to their launches. In the best case, when coordinating the use “at the level of the RF Armed Forces command in Armenia”, it may well be “a far-flying blank”. That is, the reconciliation of Iskander-M as an effective weapon had to be sanctioned by the leadership of the Russian Federation and nothing else.

Those. the Kremlin may have given the go-ahead for a one-time use of the Iskander (which the Armenian lobby so earnestly requested), but at the first stage either the E or the M modification, but precisely as a frightening “blank”. It is possible to "playback" at any moment.

There is nothing strange in such a policy of the Kremlin. Moreover, the Kremlin, over the past 13 years, has left itself "an opportunity for a rebound" for the third time.

The Iskander missile was used for the first time in the South Caucasus during the aggression against Georgia in August 2008, when it struck the central square of Gori on August 12, 2008, as a result of which a Dutch cameraman was killed. There was no special military need for the use of this weapon. As early as August 10, the main forces of the Georgian army withdrew from Gori towards Tbilisi.

However, the “Christian brothers in Armenia” were interested in the offensive of Russian troops through Georgia to the Armenian border, from the territory which Russian planes flew to bomb Gori, military airfields in Marneuli, in Vaziani, in the Tbilisi region, and other objects. By the way, that fatal Iskander missile that exploded in the center of Gori, as the case with the missile debris found in Shusha shows, could have been launched from the Russian base in Gyumri from the territory of Armenia. If planes took off from there in order to bomb Georgia, then what prevented the rocket from taking off?

Moreover, having occupied Gori, the Russian troops undressed: some of them headed for Tbilisi, and the other through the Borjomi Gorge in Samtskhe-Jvakheti to the Armenian border. Those. The Iskander's strike seemed to clear the way for the aggressors on the way to the separatist Javakhk. Only the efforts of international mediators led to the signing of a ceasefire agreement on the same day, August 12, which has not yet been fulfilled by Russia (its troops had to leave Georgian territories, including Abkhazia and the Tskhinvali region)."

If Russia did not retreat in the occupation of Abkhazia and the Tskhinvali region then, in the rest of the plans for conquest, there was a clear "rebound" of the Russian leadership. It did not take Tbilisi and fight its way to Javakhk, use Iskander in other Georgian cities. Russian tanks were ordered to “stop and deploy” just 25 kilometers from Tbilisi and in the Borjomi Gorge. The very appearance of Russian tanks in the Borjomi Gorge was then almost anecdotally explained by the fact that they say, the tankers unauthorizedly drove the tanks to "drink mineral water", and the footage with the consequences of the explosion of the "Iskander" was declared a "photomontage".

As the Minister of Justice of Georgia Teya Tsulukiani noted in 2018: “Russia argued that the photographic material that is available not only in Georgia but also in Holland, based on the case of the murder of a Dutch journalist, is a photoshop. As a result of our very thorough work, in 2017 we found one part of the Iskander fired on Gori, and a few weeks later, at the end of April, we found the rest of the same Iskander, weighing 800 kg. They, of course, bear traces of the fact that these weapons were actually produced by the respondent state - the Russian Federation."

The second time Russia “laid the possibility of a rebound,” but did not rebound in the situation with the annexation of Crimea in 2014. Recall that initially, after the change of power in Kyiv on the Crimean peninsula, all key administrative buildings and strategically important facilities were occupied by unmarked servicemen. Some "polite people" and "little green men". And only a few days later, after it became obvious that the Ukrainian army on the peninsula was demoralized (for some reason it happened - a separate conversation), it was "solemnly announced," that "Crimea is returning to its native harbor" - that is, annexed by Russia.

Why, in the early days, the Russian military was sent to take control of Crimea without identification marks is understandable. If the Ukrainian army reacted to this in time and organized resistance, it would always be possible to disown its military and declare that the Russian leadership has nothing to do with the "green men". But the confusion in Kyiv, the betrayal of the commander of the Ukrainian fleet, and a number of other officials led to the Kremlin leadership's success in the operation to seize Crimea. In the spring of 2014, at least the Russian Federation did not have to “bounce back” on the Crimean peninsula.

And finally, in Karabakh, “vultures” from the Karabakh clan, the same Robert Kocharian, Serzh Sargsyan, and others like him, insisted on the use of missiles of the Iskander operational-tactical complex. Sargsyan generally accused Pashinyan of not striking the Iskander strike at the Baku-Ceyhan oil pipeline. Apparently, Pashinyan understood that he was being "set up" and possibly sabotaged the use of the "export Iskander". The warmongers had to "shoot with blanks" - that is, on the one hand, they seemed to be "firing at" the Russian Iskander, on the other, as in the case of 2008 in Gori, if it were to end hostilities so that they could "bounce back" and not involve Russia in the war, as the Armenian nationalists were counting on that.

After Pashinyan's words about the "low effectiveness of the Iskander", Russian propaganda almost broke through. When Pashinyan said that the Armenian Armed Forces used Iskandars, but they "exploded by 10%," the Russian side circulated footage of the "effective" use of Iskandar's, (https://www.forbes.com/sites/sebastienroblin/2021/ 03/01 / moscow-assures-world-its-iskander-missile-can-precisely-hit-a-hospital /? Sh = 2bbb71bb87c5), which included footage of missile attacks on a hospital in Syria (https://www.cnbc.com/2020/03/03/united-nations-accuses-russia-of-war-crimes-in-syria.html).

ANAMA finds show that if the battles for Shusha had dragged on, then the active use of Iskander-M would be quite likely. As well as the involvement of the Russian Federation in hostilities to "save Artsakh".

But the rapid special operation of the Azerbaijani Armed Forces to liberate the city of Shusha confused all the plans of the provocateurs. The Armenian side and its Russian "assistants" clearly did not expect that Azerbaijan would completely liberate the city so quickly.

It was also reported that the Russian FSB, apparently at the request of the political leadership, began a search for "switchmen" who, if they fail to extinguish the international scandal, could be blamed for the illegal use of the Russian military machine in the interests of the Armenian lobby. This is also nothing unusual. At one time, during the years of Boris Yeltsin, the Russian Defense Ministry was shaken by a scandal of illegal arms supplies to Armenia, in which the name of the then Minister Grachev appeared, but it was just hushed up.

This time, an internal investigation by the Russian Ministry of Defense, which began in October last year, into the involvement of military officials in illegal arms shipments to Armenia, which followed Ilham Aliyev's statement on the continuous smuggling of arms to the Armenian side, has already yielded results. Suspicious invoices were found at the warehouses of the district's missile and artillery weapons, completely inexplicable flights of military transport aircraft towards Armenia are being investigated, and, finally, the purchase of an Il-76 by a businessman living in Russia Karen Karapetyan at the residual value.

"In the Southern Military District, the Armenian diaspora of Russia formed a network of illegal arms supplies to Armenia, bypassing the system of military-technical cooperation with the CSTO member state," informed sources close to the Russian Defense Ministry said. The activities of the Armenian diaspora and pro-Armenian lobbyists have crossed the red line where social and political activities end and that special section of the Criminal Code of the Russian Federation, which is about high treason, begins.

Anti-tank missile systems, MANPADS systems, charges for them, and even at least three Iskander missiles, not to mention mines, cartridges, and small arms, left the warehouses of the Russian military districts on a relatively large scale. And the accounts of the dummies were transferred from businessmen of Armenian origin from the Krasnoyarsk and Krasnodar Territories, the Tula and Oryol Regions, Moscow and St. Petersburg, even the Khabarovsk Territory.

According to the latest information, the leadership of the FSB and the Russian Ministry of Defense submitted a report to the country's leadership on the illegal deliveries of Iskander-M to Armenia.