Who benefits from provoking a conflict around the Namakhvani hydroelectric power station? 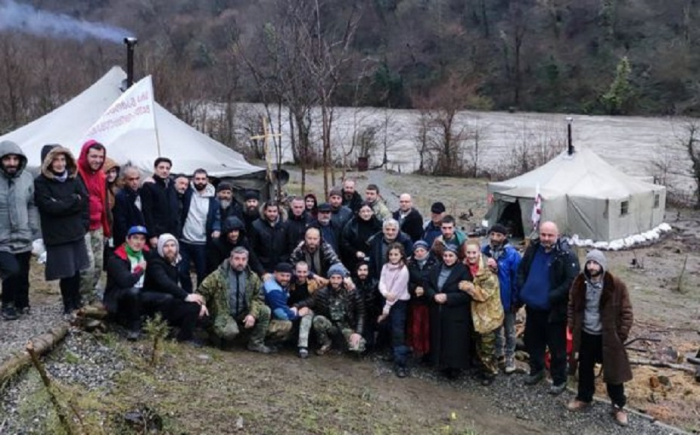 The situation around the construction of the Namakhvani hydroelectric power station in the Imereti region and Racha-Lechkhumi on the Rioni River is becoming unprecedented and damaging the image of Georgia not only in the eyes of investors but also in terms of national and religious tolerance.

“Out of the blue,” on the basis of different attitudes of the local population towards the construction of the Namakhvani hydroelectric power station, certain forces are striving to inflame a national, religious, and, in the future, geopolitical conflict. Moreover, the obvious "turkophobic" orientation of the incited conflict situation makes it easy to "figure out" the customers.

The instigators of the conflict, speculating on the fact that Enka Renewables belongs to Turkish investors, talk about the alleged "Turkish occupation" of the Rioni Valley, and completely "forgetting" that 20% of the territory of Georgia is occupied, not by Turkey. At the same time, the anti-Turkish company “linked” with the construction of the Namakhvani hydroelectric power station during the second Karabakh war and immediately after its end became especially active. There is no doubt that the Armenian lobby and the Russian special services are behind this campaign.

These "fighters against Turkish expansion", which brings nothing but energy security to Georgia, for some reason "forget" that the "hole" in the energy balance of Georgia has largely formed thanks to the "brotherly Christian people" - Armenian nationalists, who not only supported separatism and the occupation of the territory Georgia, but also the Georgians living in houses and apartments expelled by them from Abkhazia, where they “mined” cryptocurrency using the electricity they received from the Inguri hydroelectric power station, earning super-profits.

It's no secret that most of the mining farms in breakaway Abkhazia are owned by Armenian businessmen. Those who "took possession of" not only the houses and lands of Georgians but in fact use Georgian electricity for enrichment, while their fellow tribesmen are diluting turkophobia against investors who are helping to solve the problems of Georgia's energy security.

In Abkhazia, “brothers-Armenians” killed and expelled Georgians from their native land only because they were Georgians, the remaining Georgians in the Gali region were driven into a ghetto, absolutely deprived of rights (including the employees of the Inguri HPP facilities that are under control separatists). But in Namakhvani, the terror began against the Georgians at the suggestion of the same Armenian lobby. So today local residents who agree to work at the construction site and at the facility are subjected to fierce persecution. They are not called other than "traitors" and are demanded to quit, not even listening to the arguments that people simply have nowhere else to find work and have nothing to feed their families for.

This is the case with 35-year-old Salome Liparidze. She began receiving threatening messages after recording video live on social media in support of the hydroelectric power station. Some called her a "traitor", accused her of lobbying for the project, and one of the users even suggested creating a special page for such "shameful Georgians" like her.

Liparidze herself lives in Tbilisi, but, according to her, she has always dreamed of returning to her native land and finding a decent job there. Liparidze does not hide the fact that about a month ago her mother started working in the information service of the company in Zhoneti. According to her, this was just another confirmation of the benefits that this project will bring to the gorge.

“Our region has been empty since the 1990s. In houses that used to be busy, now trees are growing, - says Liparidze. - When this hydroelectric power station is built, jobs will appear here, tourism and infrastructure will develop. Of course, everything must be done efficiently, with minimal damage to the environment. There will be some damage, but this outweighs the benefits that this project brings."

According to ENKA Renewables, during the preparatory work alone, the company employed about 450 local residents. However, subsequently, about half of them refused to work, including because of insults and aggression on the part of opponents of the construction of the hydroelectric power station.

If we talk about the damage to the environment, then for some reason no one remembers that the main threat to the ecological safety of Georgia is not at all the Namakhvani hydroelectric power station, but the Madneuli ore mining and processing plant in the Bolnisi municipality. It belongs to Russian investors who, until recently, also illegally developed the Zod (Sotsk) field together with the Armenian invaders in the territory of Azerbaijani Karabakh. And for years, ore from the Azerbaijani bowels was illegally exported to Georgia, enriched at the Madneulsky GOK-e, poisoning the water and the atmosphere, causing damage to the health of the population. As a result, Russian investors and their Armenian partners-looters received super-profits, while Georgia only problems with the environment and health of the population.

Also, for some reason, no one remembers that other Russian investors from Inter RAO UES also own the Khrami hydroelectric power station cascade, and the villages of power engineers are socially the most impoverished in the entire Kvemo Kartli region. But no one even stutters about it. Nobody says that the Khrami valley is "under Russian occupation."

But the Turkish investor, who is already investing huge amounts of money in the infrastructure and social security of the population, is declared an “enemy” and an “invader”.

Turkish Ambassador to Georgia Cheren Yazgan was forced to react to the insult of investors on the basis of ethnicity. In an interview with the Formula TV channel, she noted that the situation around the Namakhvanskaya HPP cannot but cause concern: “It was a surprise for me to see the protests that began almost a year after the signing of the agreement. The second thing that surprised me was anti-Turkish, turkophobic, and in some cases Islamophobic propaganda. This is more worrying because I respect Georgian culture, the Orthodox faith is an integral part of Georgian identity, but when a cross is erected on a construction site and it is claimed that they do not want a Turkish company in Georgia, I have doubts that this is not the Georgia I know.

When we talk about the religious narrative that we saw if the company was from Israel, Italy, America, would anyone put up a cross? I don't know. So I want to ask people a question: why are you bringing in a religious symbol? I think it's very sensitive. I don't want this to set a precedent for Turkish investors. Those behind this want to end two things: the comfortable relations of Turkish investors in Georgia, the second concerns the issue of energy security, "said Ceren Yazgan.

The prime minister also noted that the Namakhvani HPP project is very important for the energy security of Georgia. “It was developed and started by our Georgian scientists 30-40 years ago,” he said. The prime minister believes that the massive protests against the Namakhvan hydroelectric power station "show signs of a hybrid energy war against Georgia."

“We also talked about transferring the territory to lease for several years. This is an accepted practice everywhere, all over the world, accordingly, this kind of rash and anti-state rhetoric that interferes with relations with our neighboring states, with investors, of course, must stop, ”Garibashvili said.

The prime minister recalled that the consumption of electricity in Georgia is growing every year, therefore, its imports are also growing. Therefore, according to him, "it is extremely important to encourage the construction of hydropower plants, including large, small, medium and micro hydropower plants."

At the same time, the scale of the resettlement of people during the construction of the Namakhvani hydroelectric power station is scanty not only in comparison with Soviet times but also by the standards of same Turkey and especially China. In the PRC, in general, sometimes millions of people are resettled during the construction of hydroelectric power plants. In Namakhvani, opponents of construction shout about “two flooded villages” and “hundreds of families” that will lose their homes, but this is speculation. Compensations will be paid to 270 families in the Nizhnyaya Namakhvani zone, but only 40 of them are being resettled. In all other cases, we are talking about the payment of compensation for land plots, including those that have not been officially registered.

Enka Renewable says that an agreement has already been reached with all local residents, with the exception of one family, on the payment of compensation. Most have already taken compensation, and with some, it remains to complete the formal procedures, the firm says.

A question to those who are stirring up the conflict around the Namakhvani hydroelectric power station: how much did the militants of the battalion of Baghramyan and their fellow tribesmen pay to the over 300 thousand Georgians expelled from Abkhazia for the seized houses and apartments? And are they going to pay at all?

Also, the total maximum area of ​​the two reservoirs of the Namakhvani HPP will not exceed 6 square kilometers. This is clearly not enough to change the climate and damage the wine industry. For comparison, the area of ​​the Tbilisi reservoir is almost 2 times larger - about 12 sq. kilometers. However, no one will say that after filling it, the climate in Tbilisi became more humid and rainy.

The Georgian government notes that the Namakhvani HPP is one of the most thoroughly studied projects. And the temporary suspension of the construction of the main facilities, the dam, and the reservoir, will give an opportunity to "calm down" passions, to suppress hysterical speculations that certain forces are trying to give a national coloring. The project should be checked by reputable specialists, and a professional and qualified opinion should be issued on all aspects of the construction of a hydroelectric power station.