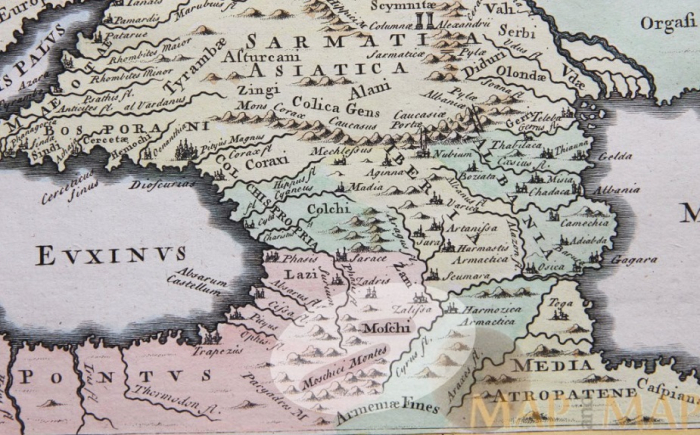 As you know, under their claims to foreign lands, Armenian nationalists always try to make a “historical justification”, as a rule, from beginning to end, invented, mythologized, and falsified. Armenian claims to Georgian lands, in particular the Samtskhe-Javkheti region, are no exception.

If from Javakheti the Armenian nationalists long ago and unfoundedly announced that it was "the original Armenian" Javakhk "(although the Armenian settlers appeared here only in 1830 thanks to the Russian Empire), then Meskheti or Samtskhe" head-on "declare" ancient Armenian land " does not work. All reliable historical sources unequivocally state that the Meskhi has always been a Georgian tribe and had absolutely nothing to do with the Khai ethnos.

Historically, Meskheti (Samtskhe) and Javkheti, Meskhi and Javakhi have always acted as a single whole and as an integral part of the Georgian people and Georgian state formations. And Javakheti has always been part of the formations, the administrative center of which was in Meskheti.

The most important thing is that almost all toponyms in Samtskhe-Javkheti, without exception, are of Georgian origin. However, this does not bother the Armenian falsifiers. They even manage to find “Armenian origin” in such “flashy” Georgian names as “Akhaltsikhe (translated from Georgian“ New fortress ”) and Akhalkalaki (“ New city ”).

Therefore, it is not surprising that the falsifiers are trying to "rank among the Armenians" the ancestors of the Meskhs, the Mushk tribe, known from historical sources.

Research "proving" that supposedly flies - Armenians are increasingly appearing on various sites. Here is an example of one such publication in English - The Mushki; a lost Armenian tribe? https://www.peopleofar.com/2020/04/19/the-mushki-a-lost-armenian-tribe/

“The Russian historian Igor Dyakonov, in his often-cited 1968 work Prehistory of the Armenian People, is known to have suggested that the Armenian language was brought to the Armenian Highlands at the beginning of the 12th century BC, after the Bronze Age. Collapse (when the Hittite Empire fell, leaving behind a power vacuum in Asia Minor and the eastern Mediterranean). Dyakonov suggested that the original speakers of the Armenian language should be identified with the flies, a people attested by the Assyrians, and later in the inscriptions of Vannik, as well as by the Luwians and possibly the Greeks. "

Igor Dyakonov's work, The Prehistory of the Armenian People, published in 1968 by the Armenian Academy of Sciences and clearly commissioned by the then Armenian leadership, is taken as the basis for substantiating claims to the “Armenian origin” of the Meskh-Mushk ancestors.

Igor Dyakonov's reputation as a plagiarist and opportunist in scientific circles is well known. So in 1961, in the series "Literary Monuments", Dyakonov's translation of the Sumerian "Epic of Gilgamesh" was published. This work brought Dyakonov success and wide popularity not only among orientalists but also outside this branch of historical science. However, later it turned out that this publication was a kind of plagiarism from the translation of the epic, made by the orientalist Vladimir Kazimirovich Shileiko, who died in 1930. Simply put, Dyakonov “stole” and passed off another, already deceased scientist as “his” work, hoping that the plagiarism would not be “noticed”.

Igor Dlyakonv's scientific "honesty" was questioned even during his lifetime. But he was "treated kindly" by the communist authorities and as the son of a "repressed" he rose up in Khrushchev's times. In the Armenian USSR, the falsifiers of history saw him as a "kindred spirit" and gave an order to confirm their delusional theories about "exceptional antiquity" and "autochthony" of Armenians and that they were "indigenous" in almost most of the Caucasus.

Dyakonov's theory made Armenians "descendants" of the population of the highlands of the South Caucasus at least in the 1st millennium BC. e., in a sense, satisfying the political order of the leadership of the Armenian SSR. But, despite this, Dyakonov's hypothesis met with criticism in Armenia, from the side of "deeper into even greater antiquity" falsifiers who were not at all satisfied with "only" the 1st millennium BC for "ancient Armenia".

Moreover, Armenian “historians” took up arms against Dyakonov for not recognizing the “Haya theory” back in Soviet times. They did not like him even after Armenia gained independence. Thus, according to the senior researcher of Matenadaran Armen Ayvazyan, the denial of the connection between Armenians and Hayasa is politically motivated and “aims to deprive Armenians of the right of autochthonousness in the Armenian Highlands”.

Due to the contradiction between the “theory of Dyakonov” and the “older” version of the origin of the Armenians, his works were not cited in Armenia for a long time. But now an "order" has arisen to substantiate the claims of Armenians to Meskheti-Samtskhe. And they suddenly remembered the theory of Dyakonov, who tried to connect the “ancient Armenians” with the flies, the ancestors of the Georgian Meskhs.

But even Dyakonov, fulfilling the “Armenian order”, did not dare to “100%” identify flies with “ancient Armenians”. For him, this is only one of the versions of their origin, while he completely does not dare to refute the opinion generally accepted by that time of almost all serious scientists about the identity of flies and Georgian Meskhs. Let's quote Dyakonov himself:

“Controversial in science is the question of the population of the Tabal region (ancient Hebrew Tubal) in the Cilician Taurus and the Mushk people (ancient Hebrew Meshek or, better, Moshek), registered by Urartian and Hebrew sources in Asia Minor, to the west of Cilician Taurus, and Assyrian, - in addition, in the valley of the upper Euphrates and in the area between the lower course of the river. Aratsani and Sasun mountains. They are often identified with Moschs and Tibarens - tribes that lived, according to ancient authors, in Pontus and, in all likelihood, belonged to the Georgian-speaking. However, the problem cannot be solved by simply identifying Tabal and flies with tibarens and moschs."

Even Dyakonov, in his clearly pro-Armenian work, takes "as a basis" the opinion of historians that the flies were identical to the Georgian Meskh tribe and only tries to dispute this version very unconvincingly and speculatively. However, neither Dyakons nor other historians present any facts of the Khai origin of flies, other than their own theories and inventions. In the best case, they manage to offer versions of the “foreign-European origin” of flies (these versions are repeated in the material of The Mushki; a lost Armenian tribe ?, but at the same time a sign of equality is put very speculatively between the “Indo-European” and “Hay” origins of the peoples.

But the Indo-European origin is not identical to Armenian! For example, the Indo-Europeans include Kurds and Persians, Indo-Europeans are Russians and Slavs in general, and most of the peoples of Europe, with the exception of the Basques, Hungarians, Finns, and Estonians. But no one seriously thinks to classify the ancestors of today's Persians, Russians, Germans or Swedes as “ancient Armenians”.

It turns out that there is nothing but unfair speculations in the "theory" propagated in Armenia regarding the alleged "Armenian origin" of ancient flies, and there are no inhabitants of ancient Meskheti. However, the fact that in this way, referring to dubious scientists, today Armenian falsifiers are trying to make claims to Georgian lands is a very alarming trend. Especially in light of the growth of separatist sentiments among the Armenians of Samtskhe-Javakheti.