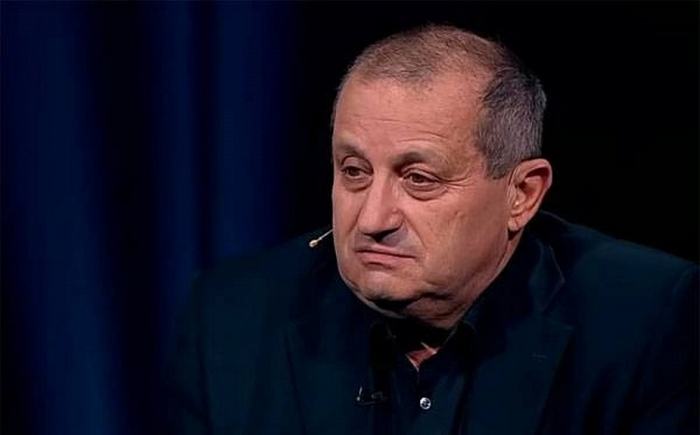 Among the rather experienced statesmen of the international community who are aware of the peculiarities of the Kremlin's policy, Jacob Kedmi should be specially noted. This native of the USSR, having immigrated to Israel, was the head of the "Nativ" service in 1992-1999, specializing in the export of ethnic Jews from the former USSR to Israel.

Naturally, the Nativ service (in fact, being part of the Israeli intelligence service "Mossad" and later directly included in it) knew all the specifics of separatist movements, wars, and conflicts that were artificially kindled then in the space of the former USSR. Including Abkhazia and in the Tskhinvali region. These conflicts at that time also played a role in the departure of Jews from "hot spots" to Israel.

At one time, Yakov Kedmi held senior positions in the "Russian department" of the Israeli Foreign Ministry, Kedmi has personally known Vladimir Putin since the early 1990s and is well aware of the nuances of the policy of the current Kremlin leadership.

True, Yakov Kedmi in his public statements tries not to contradict the official Kremlin propaganda and speaks about many things, albeit rude but in hints. Kedmi is on good terms with one of the main Kremlin propagandists, Vladimir Solovyov, and regularly appears on Solovyov's program on the Rossiya TV channel. Yakov Kedmi also speaks as a political scientist in other programs on Russian television and radio, especially often on the Vesti-FM radio station.

Analysis of the statements of Yakov Kedmi shows that he “accidentally” does not say anything. If this well-informed figure makes it clear about some political phenomenon that “bargaining is possible” here, then this is almost a 100% sign that political bargaining is already underway. Even behind the scenes, even if they may end in nothing, but the fact of the beginning of trade is already there.

Therefore, it is worth paying attention to the last interview of this politician - "Yakov Kedmi:" None of the small states are able to maintain their own independence" ( https://vnnews.ru/social/91080-yakov-kedmi-ni-odno-iz-malykh-gosudarstv-ne-v-sostoyanii-uderzhat-sobstvennuyu-nezavisimost.html?fbclid=IwAR0iwI_JE_ww4l1HblE0lwJIAIK6QYb7YppF4OYuia7xL2ZI--7CghP-chA )

Here is a part of this interview concerning separatist Abkhazia:

“- The events taking place in Abkhazia, in particular the arrest of Avidzba Akhra Ruslanovich, better known by his call sign Abkhaz, do not indicate a change in the vector of the recognized republic of Abkhazia? And in general, how confidently can one speak about the further voluntary preservation of the independence of other recognized and not so recognized republics?

- The development of events over the past twenty or thirty years shows that all talk about the alleged independence of small states is just a delusion, an illusion, or a deliberate deception. None of the small states are able to maintain their own independence. The won independence from one country quickly changes to dependence on another country. Only powerful and strong countries can be truly independent countries - and only if other countries are interested in their independence. The only example I can give is Switzerland. Everyone is interested in an independent Switzerland. Therefore, while she has no threats and she can be independent. All other countries, starting from the supposedly large ones, if we are talking about Ukraine or smaller ones, if we are talking, for example, about the Czech Republic or Hungary, all these countries can exist only as a result of the balance of all other states that are interested in their independence.

- And yet, returning to Abkhazia, aren't the recent actions of the republican authorities a kind of protest, indicating disappointment and a readiness to turn towards Georgia?

- If Georgia is able to "buy" a part of the state and political elite of Abkhazia, attempts to reverse are possible. But this may not be for long, because Georgia itself is not an independent state. It belongs to those who subsidize it. If the authorities of Abkhazia are ready to enter the secondary market of political prostitution and engage in this craft for the benefit of an older colleague, then well, this is possible. This happens in politics. What is happening today in the post-Soviet space, these supposedly national political movements were the result of the venality of those who stood at the head, and those who invested enough in their purchase. And then, as Bernard Shaw said: "The question of price."

- Towards the end, as a wise person, observing, analyzing, and feeling, tell me, do you have an inner feeling of such a powerful repartition of everything?

- In general, it reminds me of the state that was in Pompeii, when there were already underground shocks, tremors, a smell was felt, but people still did not believe that there would be a volcanic eruption. We, all of humanity, are facing a severe shock of the entire state, political world structure, from which only stable, strong formations, states will survive ... All the rest will change. How it will be and when exactly - I do not know. It depends on many contingencies. But the fact that the current world system is unstable and ineffective and is leading to more and more crisis is already visible to the blind."

The words of Yakov Kedmi "What is happening today in the post-Soviet space, these supposedly national political movements were the result of the venality of those who stood at the head, and those who invested enough money in their purchase" - this is clearly an allusion to the leaders of the Abkhaz separatists (the same Vladislav Ardzinbu and his accomplices).

The separatists once "sold" the Abkhaz people in bulk to immoral Kremlin politicians and the Armenian lobby, dragging them into a destructive and fratricidal war with Georgia, from which the Abkhaz themselves received nothing but devastation, grief, suffering, degradation, and extinction. Despite the fact that on this grief and suffering the leaders of the separatists did and are doing business, demanding from the "owners" new and new payments for the "last sale".

But the "shabby" separatists, their current "owners" are no longer averse to "resell". The whole question is about the price. This is not to mention the corrupt nature of the separatists themselves. Which is what Yakov Kedmi is cynically hinting at.