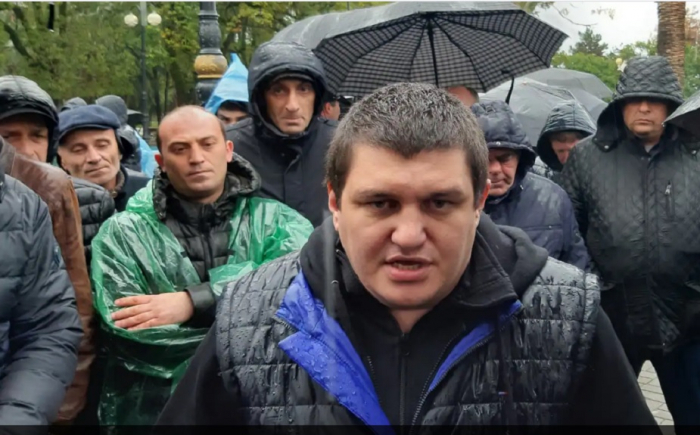 The arrest in Sukhumi of a marauder fighter who fought in the separatist so-called “DPR” Akhra Avidzba in eastern Ukraine and his imprisonment by a separatist court for a month so far has agitated the already difficult situation in separatist Abkhazia. According to experts who are well familiar with the situation on the separatist territory, this may mean a sharp acceleration of the final solution of the "Armenian and Abkhaz issue" in Abkhazia - its transformation into "Primorskaya Armenia".

It is no secret that Akhara Avidzba was actually one of the main executors of the plans for the accelerated Armenianization of Abkhazia. Moreover, both he and his curators were indiscriminate in the means to achieve the goals. Avidzba's current arrest took place "at the most decisive stage." When there is already a mass settlement of Abkhazia by Armenians.

In principle, it would be a stretch to call Akhra Avidzba the main "curator" of the Armenian project in Abkhazia. There are clearly smarter people behind him, who are not yet “shining”. These people are most likely not entirely happy with Avidzba.

Incomplete subordination and incomplete loyalty of Akhra Avidzba irritated many separatist influential officials and leaders of the Abkhaz clans. Therefore, most likely, the Armenian “owners” decided to either “finally use” the militant-puppet or finally “write it off”.

Avidzba's arrest and imprisonment artificially exacerbated the situation in separatist Abkhazia, which is most likely what his Armenian “masters” need, who have “preparations” for any scenario of the development of events.

If the assumption of Avidzba's “huge popularity” in the separatist society, especially among the Abkhaz youth, duped by nationalism and stories about the “romance of war and looting” is confirmed, then the Armenian lobby is quite happy with it. Then, in the near future, Avidzba will be released in triumph, and there is a prospect of reaching “power”, together with his Armenian “brothers”. Then you can calmly arrange terror against the Abkhazians dissatisfied with the Armenian dominance, as against the "traitors" and "agents of Georgia."

Those. even without particularly “dirty hands”, the Armenian lobby, with the help of such as Avidzba, will arrange an “ethnic cleansing” of Abkhazia from the Abkhaz in the Armenian interests by the hands of the Abkhaz themselves. And thus, the solution of the Abkhazian issue and the transformation of separatist Abkhazia into an Armenian state will quickly reach the home stretch.

If Avidzba turns out to be a "weakling", then the main person responsible for solving the "Armenian issues" in Abkhazia will be replaced with a smarter and less irritable figure.

One way or another, it is obvious that it is impossible to resolve the issue of mass settlement of Abkhazia by Armenians "in a sluggish format". It does not help to “hide” thousands of arriving Armenian migrants from Abkhazians and their accommodation and even turning off the electricity.

Abkhazians see that before our very eyes they are becoming a small and insignificant minority on their land, which will be swept away by Armenian settlers not today tomorrow. Therefore, the Armenian lobby is in a hurry with provocations, since the supporters of the settlement of Abkhazia by the Armenians of Akhra Avidzba are still a "hero" among the Abkhaz youth.

Those who implement a multi-way combination of settling by representatives of the "long-suffering people" in the primordial Georgian lands of Abkhazia have a hope that the dissatisfied with the current separatist government and intoxicated nationalists Abkhazians will follow the Armenian agent Avidzba and, in fact, accelerate the destruction of their own people with their own hands. Naturally, they do not want to miss such an opportunity, since they have been hatching plans for another Armenian state on the Black Sea coast for decades.

On March 11, actions of supporters of Avidzba are planned, who during the trial in an obscene form had already called on his supporters, in fact, to crack down on the current separatist government. Therefore, in the coming days, all sorts of excesses and provocations are possible in Abkhazia, even if Avidzba is “written off in circulation”, this will not change the plans of the Armenian lobby for the mass settlement of Armenians in Abkhazia. It's just that their implementation will become more tricky and careful.