Does Abkhazia go to Georgia and NATO? - Semyon Pegov's panic 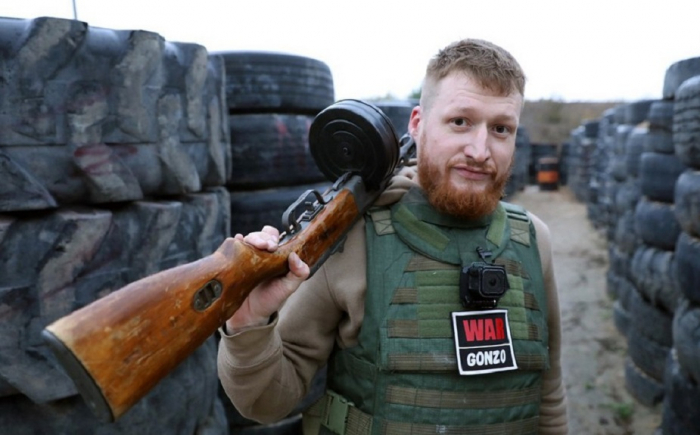 Those who followed both the information and the Armenian disinformation around the Second Karabakh War remember very well such a deceitful propagandist as Semyon Pegov. In fact, a blatant lie, designed to “raise the spirit” of the Armenian aggressors and occupiers, was the main “trick” of this, if I may say so, “war correspondent”, or rather an information provocateur.

By the end of the Karabakh war, Pegov had been "figured out" and there was even a sure sign: a video report of Pegov about the "heroic battles" of the Armenian army in a particular area appears on social networks, this is a 100% guarantee that this area is either already under Azerbaijani control, or full control will be guaranteed in the coming hours. As a rule, the Armenian occupants “heroically posed” for Pegov on the eve of a panicky flight.

Pegov also constantly lied about the mythical “thousands of Syrian Islamist mercenaries” (the Armenian side never showed such a mercenary), while thousands of terrorist mercenaries from Syria, Lebanon, separatists from Georgian Abkhazia, and Samtskhe fought in the ranks of the Armenian invaders. Javakheti).

The surrender of the Armenian aggressors in Karabakh made Pegov's services unnecessary here, and as a banal mercenary provocateur (and not a "journalist") he realized that it became unsafe for him to be in Azerbaijani Karabakh. And at the direction of his Armenian "masters", first of all, Aram Gabrilyanov, he temporarily "relocated" to Syria, where he began to specialize in the already traditional lies about mythical "Turkish militants". The goal is clear - to try to take advantage of any pretext to push Russia and Turkey in Syria.

But, unexpectedly, Pegov distracted himself from the "terrible Turkish militants" who, for some reason, are building their "Great Turan" precisely through Syria, which is located in a completely different direction, and begins to "sound the alarm" about the fate of separatist Abkhazia, which, according to his opinion in danger!

"Is Abkhazia going to Georgia and NATO?" - under such a loud headline, a post appeared on Semyon Pegov's telegram channel (https://t.me/chvk_pegov/24). We quote it:

“The events unfolding in Sukhumi make me think seriously about this issue. I have lived in the Land of the Soul for over 4 years. It was there that I became a reporter in many ways.

What inspired me? And why did I then become a military commander?
These are, first of all, the stories of my Abkhaz teachers and senior comrades about the armed conflict of 1992-93, about the unprecedented victory of the Abkhaz people, about the feat of the Commander-in-Chief of the Republic of Armenia Vladislav Ardzinba, who, being originally a non-military man, was able to take responsibility and lead the fighters against knowingly a stronger enemy.

I grew up with these stories. Abkhazia was for me an example of how we, Russian volunteers and militias, should fight for our historical territories. And then I saw how we fought in the Donbas. And the Abkhaz - in the person of the Hero of the DPR Akhra Avidzba - stood with us shoulder to shoulder. Like volunteers from Russia, they once stood alongside the Abkhaz in the fight against radical Georgian nationalism.

What do I see now? Akhra Avidzba was detained in his homeland by lawlessness, sits in a cell. At the same time, the Abkhaz elites do not hesitate to talk about their nascent friendship with Georgia, how they want to attract money from there, and so on.

Is it a secret for someone that Tbilisi is actively (somewhere hidden, somewhere explicitly) working for NATO? Did the 08.08.08 war leave any doubts about that? Did NATO leave Georgia after that?

Now a war is about to start in Donbas. Akhra Avidzba is one of the main commanders and symbols of the Russian Spring, now the Russian World needs him more than ever. Many of his associates are dead. Motorola, Givi, Zakharchenko. They were destroyed by the enemy - vile, surreptitiously, using the services of traitors and Judas. For conditional thirty pieces of silver.

With Akhra, in fact, they are doing the same thing now. Only openly and without hesitation.

So I want to hear from the authorities of Abkhazia now - do they work with NATO? Are they working in the interests of Kyiv, Tbilisi, and Washington? Did they sell themselves to Georgia? Didn't the Karabakh scenario teach anyone anything?

The first thing that can be immediately understood from that post is that Pegov, in fact, admits that he and the Abkhaz separatists are "of the same Armenian nationalist field of berries." Semyon Pegov lived in separatist Abkhazia, "went through the school of separatism." He "grew up on stories" about the treachery and meanness of the Abkhaz separatists and Armenian nationalists, who killed the neighbors of the Georgians, who seized their homes. And it's understandable why he loves terrorists, marauders, and murderers, including the "Artsakh" ones.

After going through the "separatist school" Semyon Pegov showed himself to be an obedient and loyal "informational chain dog" of his masters. Therefore, its owners are thrown into the most critical areas. True, in Karabakh, the Armenian aggressors suffered a complete failure. And now, especially for them, the price of Georgian Abkhazia has increased. After all, it is here that, according to their plans, a “second Armenian state” should arise instead of the liquidated “Artsakh”.

The Armenian masters in Abkhazia also have their own "watchdogs" among the Abkhaz separatists themselves. Among them, not the least role is played by the separatist militant and marauder of the "new wave" who passed through the Donbas and has experience of war and looting Akhra Avidzba. It was Avidzba who first began campaigning in Abkhazia for sending mercenary fighters to Karabakh during the Second Karabakh War. But then the mercenaries from Abkhazia and other countries did not have time to help the Armenian invaders.

Today, Avidzba's value has all the more increased - on the instructions of his masters, he must prevent timid attempts by separatists of the "old wave" to rescue the Abkhaz from being completely absorbed by Armenian settlers to establish relations with Georgia.

Akhra Avidzba managed to make enemies among the Abkhaz. And they are not at all delighted that such a "lawless man" will begin to establish his own "order" on the separatist territory.

Pegov himself writes about the reasons for the dislike of many separatist leaders for Avidzba:

Akhra Avidzba actually has a lot of questions about the "origin" of the weapons seized according to the Abkhaz security officials. We have no right to disclose details now, Akhra himself will tell what he sees fit.
However, even without additional explanations, it is obvious - in conditions when you are a well-known commander of "Pyatnashka" and a Hero of the DPR - you have quite a few external enemies. Kyiv is hunting him, Georgia - he is down the throat, in the light of the current situation, he should also be afraid of the Turks.

Considering that representatives of the Abkhaz elites now freely ride in Zugdidi and Tbilisi, the presence of armed guards at Akhra is absolutely logical and understandable.

It is unlikely that this was news for the authorities. Moreover, the current president himself resorted to the help of these same Donbas guys when he came to power.

Sukhumi elites are not afraid of weapons. And the fact that Akhra will bring into politics young people who are tired of all that is happening, who want to achieve something more for their country and stop the dull saw of money allocated by Russia."

In principle, it becomes clear what role the “faithful dog” of the Armenian lobby Akhra Avidzba was supposed to play. Its task is to remove from power the separatists of the “old wave”, especially those who begin to understand what sad prospects for their people the Armenian rule in the separatist territory brings. And then Avidzba had to ensure the complete transfer of power in separatist Abkhazia to the "Artsakh" terrorists and their compatriots from the Baghramyan battalion (whom the same Avidzba recently helped to send to Karabakh).

The anti-Georgian "Maidan" organized by the pro-Armenian forces after the trip to Tbilisi of Aslan's former adviser Bzhania Benur Kviraya showed that Akhra Avidzba with his militants who had the experience of the war in the Donbas could at any moment wind down the current separatist government. They decided to “play it safe” and, just in case, “neutralize” Avidzba. But the way the regular Armenian propagandists began to defend him shows that the Armenian lobby has very, very serious plans for Abkhazia. The Kalantarovs, Gabrilyanovs, and others like them will no longer be allowed to give orders to someone on the territory that they consider "theirs". Even the separatists dependent on them. Moreover, they began in despair to try to save their people from an almost hopeless situation, and "without sanctions" of the Armenian masters are looking for contacts with Tbilisi.