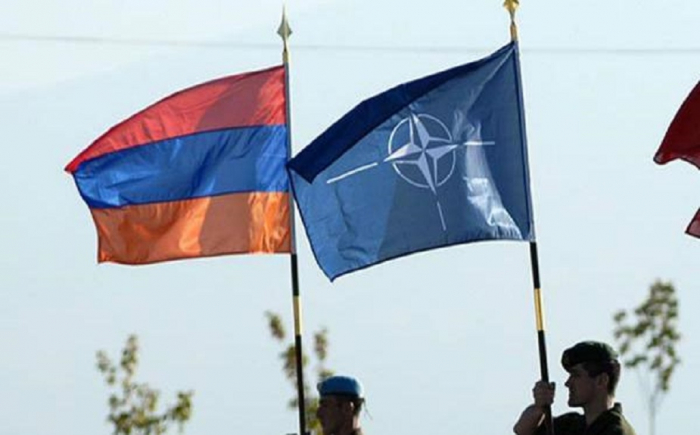 Many of those who are building illusions about the “gratitude” of Armenia to Russia are still puzzled by the sharp rise in anti-Russian sentiment in the Republic of Armenia so that the Armenian authorities in fact participated in an attempted Georgian coup d'etat under anti-Russian slogans provocateurs and militants.

But we must understand that the arrival of Nikol Pashinyan's pro-American puppet in 2018 by means of a Maidan coup marked the final departure of Armenia from Russia and its transition to the western orbit. The hostile steps taken by the new Armenian authorities towards Russia follow one after another (here the arrest of the CSTO secretary Yuri Khachaturov and the pressure on the Russian companies of Armenia), but there is no definitive gap as well as the final withdrawal of Armenia from the CSTO.

The fact is that the new authorities of Armenia are trying to make the final break with Russia and the transition under the protection of the West so as not to end up in a “vacuum” when Russia has already left Armenia and NATO has not come yet (meaning the troops of other NATO countries, and Turkey’s hostility towards which the Armenian authorities do not even think about changing). Fatal for the Armenian state can even be a “half-hour vaakum”, as Mikael Hayrapetyan, the head of the Conservative Party of Armenia, frankly told in his interview to epress.am (“Dashnaktsutyun”, West, Stalin and the strategic goal of Armenia – interview www.epress.am)

Here are eloquent excerpts from this interview by Mikael Hayrapetyan:

“I dream of a day when our country will be a member of NATO, but I ask for your attention, the Russian soldier should depart on the same train, which by that time will bring the NATO soldier here and not on the contrary ...

History does not tolerate empty spaces. Due to such a void in 1920, we lost the integral parts of Armenia, Kars, Surmalu, and Nakhijevan, and the Turkish army remained in Gyumri for a long time. Another half-hour vacuum - and there is nothing left of Armenia...

We are the last frontier of Christianity. For a whole millennium, we have been a stronghold of the cultural West. Our system of values, being the last thousand years in the Islamic environment, has not had the opportunity to develop...

To overcome the current cultural crisis of the West, it needs new lymph, which the Baltic States and Georgia cannot provide. Here our role will be invaluable...

The Islamic world no longer has a competitive idea that it could offer, as it was 700 years ago. Today there is no single Eastern civilization system. So, without any alternative, Western civilization, thank God, is our native system, and as soon as possible find ourselves there with minimal losses. ”

From these words, in principle, it becomes clear why the authorities of present-day Armenia are interested in a coup d'etat in Georgia. And also, if possible, in the disintegration of the Georgian state, the war and chaos on Georgian territory, so that Georgia, figuratively speaking, was a “courtyard”.

After all, the same train that Russian soldiers will depart from Armenia for and NATO troops can arrive only through the territory of Georgia and in no other way.

In the present conditions it is impossible. The government of Georgia, no matter how they accuse him of the “pro-Russian position,” will never agree to the country that is still occupying 20% of its territory, in this case Russia, without stopping this occupation, moving its troops through Georgian territory. Even they would withdraw their troops from Armenia, and even if NATO soldiers would send them to Armenia by the “same train”.

In addition, having a large Muslim community in the country (including Georgian Muslims), the Georgian authorities are alien to the Islamophobia that dominates in Armenia. Georgia cooperates with Muslim countries, and naturally they will not make their country an “outpost of the West against the Islamic world,” with the prospect of receiving religious dissension within their state. For any sensible Georgian politician, this is excluded in principle. But the Armenian provocateurs are not at all consciously inciting religious enmity to destroy the Georgian state.

At the same time, the Armenian lobby does not want to allow the de-occupation of Georgian territories and the elimination of separatist entities. Armenian nationalists "strangled" in Georgian Abkhazia. The occupation of Abkhazia by Russia in fact contributes to the fact that this territory becomes fully Armenian. The Armenians here control the entire economy and in fact have already surpassed the number of rapidly dying and degrading Abkhazians.

Therefore, the paradox of the new Armenian government needs a “NATO approach to Armenia” - but without the full membership in NATO of neighboring Georgia. Indeed, in this case, it is likely that the West will force Russia to de-occupy Abkhazia and the Tskhinvali region. It is clear that if the de-occupation of Abkhazia occurs, the Armenians will no longer be a majority here and they will have to return the “trophy” property to its true owners, the Georgians.

Hence the seemingly paradoxical “difference of opinions” within the Armenian lobby, some Armenian politicians “call NATO for Armenia”, while others “sound the alarm” regarding the prospects for NATO membership of Georgia. Although the goal of those and others is the same - to do so, even when betraying Russia, Armenia “takes away with itself” the territories that it actually received with the help of Russia, not only Azerbaijani Karabakh, but Georgian Abkhazia.

The decision to betray Russia in Armenia was made. It is irreversible and final. The fear of the same “half-hour vacuum” just keeps from expelling the Russian military base of Armenia. To do this, they need to have NATO soldiers on the borders of Armenia ready to immediately enter the country as soon as the Russian ones leave it.

Armenian “Javakhk” separatists may well contribute to their incitement.

At the same time, Russia, according to the plans of the Armenian lobby, should ensure Armenian domination in Abkhazia, despite the betrayal of Russia by Armenia. Considering the influence of the Armenian “fifth column” in the Russian Federation, the plan is quite real. But for this, Georgia must be very weak and torn apart by distemper, as in the early 90s. And the way to such a state of Georgia is clear - a coup d'etat or a civil war.