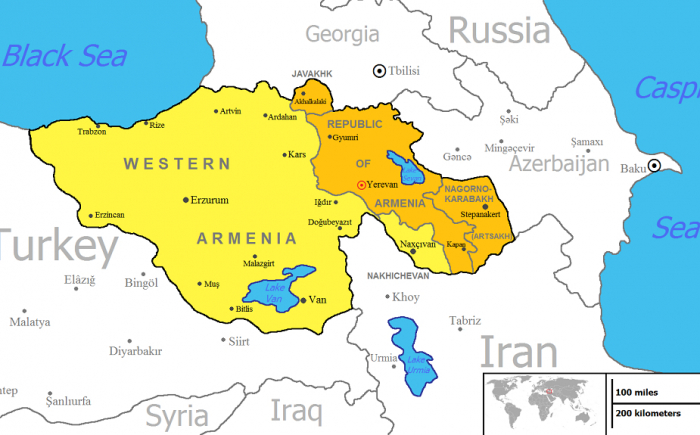 Moreover, some of the Armenian nationalists are already posing the question in such a way that Georgia should make amends for its alleged “guilt” before the Armenians by the regions of Samtskhe-Javakheti and Tsalka. For agreeing to leave both Karabakh and Eastern Turkey as a part of Azerbaijan and the Turkish Republic, respectively, which was confirmed by the Moscow and Kars treaties, the 100th anniversary of which will be celebrated this year.

Today Armenian nationalists want to revise these agreements. Including in order to try to call into question the belonging of Akhalkalaki and Tsalka to Georgia, to fit it under the “Karabakh scenario”.

This is precisely the conclusion that can be drawn from the material published in the lragir publication close to Nikol Pashinyan under the heading “The Foreign Ministry is obliged to voice the issue of the Moscow Treaty from the UN rostrum” (https://www.lragir.am/ru/2021/03/02/199228/ ). Here are excerpts from the article:

“2021 will be a turning point for Armenia. We need to take steps that will form the basis of our foreign policy.

Independent MP Anna Kostanyan stated this in parliament.
“We need to assess the bitter experience of the Armenian-Russian and Armenian-Turkish relations. March 16 marks the 100th anniversary of the Moscow Russian-Turkish Treaty, which tore 40 thousand square kilometers from Armenia - Kars, Nakhdjevan, and Nagorno-Karabakh. By the Moscow treaty without the signature of Armenia, Nakhijevan is transferred under the protectorate of Azerbaijan. This agreement is often referred to as the Lenin-Ataturk deal since Russia and Kemalist Turkey entered into an agreement that cannot be legally binding. According to this agreement, Russia has more powers on the territory of Nakhichevan than Turkey. On March 16, another treaty was signed in London - the Russian-English one, by which Russia forbids its ally Armenia from making territorial claims to its neighbors. On July 4 and 5, 1921, by the decision of the Caucasus Bureau of the Communist Party of Russia, which, by the way, has no legal force, since the party body cannot make international decisions, Nagorno-Karabakh was illegally transferred to Az. SSR, wherein 1923 the Nagorno-Karabakh Autonomous Region was created. For this decision, together with the Azerbaijani communists, the Georgians also vote, and the Azerbaijani colleagues compensate them with meetings on July 7-9, voting for the annexation of Akhalkalak and Tsalka to the Georgian SSR, ”she said.
According to the deputy, the parties to the Russian-Turkish agreement on March 16 are not Armenia, Georgia, and Azerbaijan, but Russia and Turkey ratified this agreement in Kars in the fall of 1921.
“In fact, the annexation of 40 thousand square meters was legalized. km of the territory of Armenia in favor of Turkey and Azerbaijan. In the days of the centenary of this anti-Armenian treaty, I urge you to re-evaluate the painful path of our people and our relations with neighbors. It is strange that the majority of our people believe that the Moscow and Kars treaties were concluded 100 years, and their terms are supposedly expiring."

Everything is clear: it was Georgia that was called to blame for the failure of the “Great Armenia” at the expense of the Turkish and Azerbaijani lands. And allegedly in exchange for such a position of Georgia, in the person of the then leading Georgian communists, Azerbaijan supported the fact that Tsalka and Akhalkalaki were part of Georgia.

Proceeding from this, it is logically possible to expect at any moment, especially in the “turning point” from the point of view of the same edition of lragir in 2021, that Armenia's claims to these lands will arise at any moment. As well as the separatist revolt of the Armenians living here, initiated from Yerevan.

The Georgian media are already watching with caution and anxiety the new claims of their southern neighbors. In particular, ambebi.ge publications reacted to this in the material “Azerbaijanis supported the Georgians and voted for the transfer of Tsalka and Akhalkalaki to the Georgian SSR” - What does the Armenian deputy say? ” (https://www.ambebi.ge/article/256234-azerbaijanelebma-kartvelebs-mxari-dauchires-da-xma/).

At the end of her provocative introduction, the same Anna Kostanyan stated:

“Our foreign ministry is obliged to voice the issue of these anti-Armenian treaties from the rostrum of the UN. I call on the government and the Foreign Ministry to bring these issues into imperial public diplomacy by all possible means."

There is no doubt that by revising the Moscow and Kars treaties, Armenian nationalists will try to question the borders of Armenia and Georgia, in order to then openly support the separatists and achieve the annexation of the same Samtskhe-Javakheti and Tsalka.