'Launching Iskander in Baku', revanchism and rehabilitation of Nazism 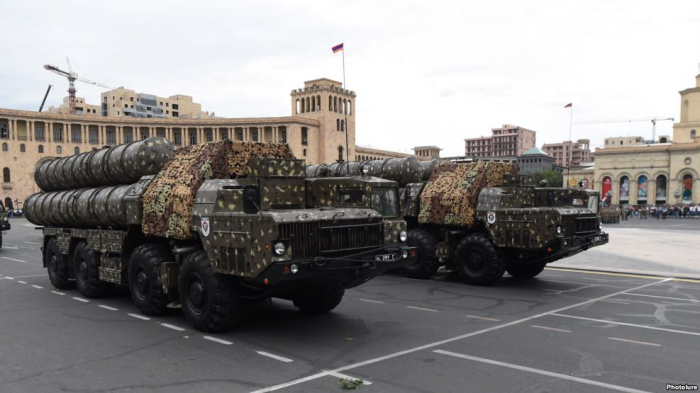 The Middle East Eye edition, referring to a certain "high-ranking official", published a new "version" of the end of the Second Karabakh war. According to the publication, during the war in Nagorno-Karabakh, Armenia launched at least one missile from the Iskander complex at the capital of Azerbaijan, Baku, which was shot down by the Israeli missile defense system. It is also said that Russia was behind the actions of Yerevan, which allegedly in this way wanted to force Azerbaijan to start peace negotiations...

“The Iskander ballistic missile was launched by Yerevan directly at the capital [of Azerbaijan] a few days before the ceasefire. This frightened Azerbaijani officials. But the anti-missile defense system operated by the Azerbaijani military, the Israeli Barak-8, shot down it [the missile], ”the source allegedly said.

Also, an anonymous source from the Middle East Eye stated that Russia strongly supported Armenia's intention to use the Iskander missiles and provided material support when the question of launching them arose.
The Middle East Eye also claims that the former head of the military control service of the Armenian Defense Ministry Movses Hakobyan told reporters that Yerevan did indeed launch a short-range missile at Baku, adding that he could not say exactly where this happened. According to him, during the war in Karabakh, Russia supplied military supplies to Yerevan "as much as their conscience allowed." The publication also indicates that a few hours before the ceasefire announced on November 9, 2020, a video appeared on social networks, which allegedly shows the launch of an Iskander missile by the Armenian military towards Baku.

Even a cursory analysis of the "sensation" published by the Middle East Eye shows that we are dealing with deliberately provocative disinformation. What goals this disinformation set is also not difficult to guess.

First, the military putsch in Yerevan, judging by the latest trends, is drowning. Nikol Pashinyan is still in power. And those who are behind this putsch need to show their supporters and those who, in one way or another, admit the possibility of revanchists coming to power that Russia allegedly “is still a“ loyal ally ”of the Yerevan regime in its aggression against Azerbaijan and the occupation of Azerbaijani lands ... Say, you just need to change the "unjustified trust" Pashinyan for representatives of the previously ruling Karabakh clan, bloody "hawks" and executioners, such as Robert Kocharyan.

Secondly, this misinformation actually justifies the wave of the revival of Nazism and wild anti-Semitism in Armenia with the glorification of the Nazi criminal and participant in the genocide of the Jewish people Garegin Nzhdeh. The cannibal Nzhdeh, who destroyed the Jews, they say, thereby “destroyed the enemies of the Armenians,” who later began to help Azerbaijan. In the eyes of the residents of the Republic of Armenia, intoxicated by Armenian nationalism, such informational stuff indirectly justifies the recent desecration of the memorial to the victims of the Holocaust in Yerevan.

Thirdly, they hint that a revanchist war with Azerbaijan, with the use of Iskander and the "blackmail" of Baku by Russia, is possible. They say, “we will overthrow Pashinyan, install Kocharyan, launch Iskander across Baku - and we will immediately be“ returned to Artsakh ”. It is clear that this is a completely inadequate nonsense, but some of the Armenian nationalists would like to hope for a similar scenario for the development of events.

The trends of recent days show that the likelihood of revanchists from the Karabakh clan coming to power and the success of a military coup are dwindling before our very eyes. In the actions against Pashinyan, even at their very "peak" on the streets and squares of Yerevan, at best, a tenth of the number of people who married Pashinyan and against the Karabakh clan, which in 2018 was associated with Serzh Sargsyan, come out.

No matter how disappointed the Armenian society in Pashinyan is today, it will not bring bankrupt corrupt officials back to power. Moreover, minimally sane Armenians will not rely on military putschists who have lost the Karabakh war.

After all, more and more Armenians are wondering who prevented the same rebellious chief of the General Staff from organizing "brilliant" operations during the Second Karabakh War so that they would be victorious. Pashinyan? Then why, during the war, he not only kept silent but threw young guys to the slaughter? Why then did he not say who is stopping him from winning? And if he followed Pashinyan's orders, knowing their "treacherous nature" (as he and other military putschists today claim), then he is also to blame for the defeat.

And in the end, the catastrophic technical lag of the Armenian army from the Azerbaijani, its inability to conduct modern military operations even with the notorious Iskanders in service, the fault is not so much of Pashinyan as of the same Karabakh clan that ruled Armenia until 2018.Wines of war criminals who were very good at destroying civilians, "hiding behind" the Russian army that fought for them, but they themselves turned out to be absolutely incapable of fighting on the battlefield.

The informational passions around the "Iskander", the further, the more they inflict a blow on the image of Russia. Either there is information that the Iskanders, as Pashinyan said, do not explode, then they are allegedly shot down by the Israeli missile defense system ... The question is why and who needs such Iskanders if they cannot really influence the outcome of the war?

It turns out that by their desire to justify their defeat in the second Karabakh war, Armenian nationalists and revanchists are doing "allied" Russia a "disservice" and further harm its image as the world's second superpower. And also falsely stating that it was the Russian Federation that initiated the shelling of Baku by Iskanders during the Karabakh war, they call into question the very right of Russia to be a peacekeeper in Karabakh and a guarantor of the peaceful reintegration of Azerbaijani lands populated by Armenians into a single Azerbaijan State.