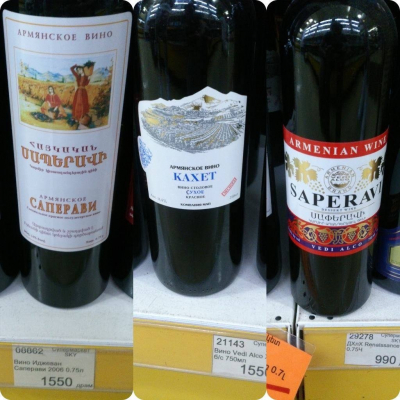 Almost everyone who is at least minimally familiar with the geopolitics around the separatist and occupied territories of Georgia knows about the peculiarities of the Georgian language and Georgian spelling. The fact is that in the Georgian language most names have the letter "i" at the end (less often "a" or even less often "o") and never end with a consonant letter. Those who want to appropriate something Georgian, discard the letter "i".

And at the same time, Armenian counterfeiters, using the popularity of Georgian wines in the world, are trying to make money on this by selling low-quality “wine-like” drinks produced in Armenia under names reminiscent of Georgian ones.

The whole world knows that the main wine-making province of Georgia is Kakheti. So the Armenian falsifiers have launched a low-grade product under the stolen name "Kakhet" and are trying to make money on its export.

Fortunately, the Georgian customs authorities have begun to seriously fight this illegal "business" damaging the reputation of Georgia and Georgian winemakers. And the falsifiers from Armenia and "distributors of wine with stolen names" had problems.

The fight against counterfeiting began back in 2020. And it turned out that the Proshyan Brandy Factory in Armenia had arranged the supply of counterfeit wine called “Kakhet” through Georgia to Ukraine by one of the firms in Kyiv back in December 2020.

“We sent the first consignment to the supplier through the territory of Georgia in 15 trucks back in November. Then there were no problems. Already in December, at the checkpoint, two trucks with our wine were detained and, without explaining anything, they were sent to the Tbilisi customs terminal, ”said Vladimir Yeranosyan, export manager of the Proshyan Brandy Factory, to Sputnik Armenia.

According to him, at the time of the interview, 3,500 bottles of wine remained in Georgia, another 7,000 bottles intended for export had not been sent to the addressee - Kyiv. Yeranosyan noted that the Ukrainian company has already filed a lawsuit, and the Georgian prosecutor's office is the defendant.

Another counterfeiting company, VanArdi, faced the same problem in January. According to the founder and owner of the winery, Varuzhan Muradyan, the container with falsified wines from Armenia was supposed to go to the United States through Georgia. However, on the territory of the transit country, the customs officers removed the seal and opened the container. No wine was missed. Muradyan was surprised by what happened since he has been exporting wine through the territory of Georgia for seven years and has never faced such a problem.

How could an "autochthonous Armenian variety" appear in the territory where Armenian settlers began to populate en masse only 200 years ago, and the indigenous Azerbaijani population, due to the Muslim faith, grew grapes for fresh or dried consumption, but not for wine production - Muradyan did not explain ...

The director of the Armenian Viticulture and Winemaking Fund Zara Muradyan also stated: “Kakhet” is an Armenian variety of wine, and we have every reason and full right to call it by our own name.”

At the same time, she is outraged that "the Georgian side claims that this name is associated with their region of Kakheti, and we have no right to call wine that".

In general, if falsifiers from Armenia are allowed to continue to steal Georgian names and sell obviously falsified wine under the alleged “names of varieties”, then tomorrow, by analogy with “Kakhet”, “autochthonous Armenian varieties” of grapes “Kinzmaraul” and “Khvanchkar” will appear. And the corresponding names of "primordially Armenian" wines are consonant with Georgian wines popular on the international market.

It's amazing how those who love to totally steal everything that belongs to others, counterfeiters have not yet appropriated the famous Khvanchakara wine, named after the village of the same name in the Georgian region of Racha, where there have never been any Armenians. After all, it is obvious that some of the Armenian falsifiers already hear the Armenian “khachkar” in the word “khvanchkara”.