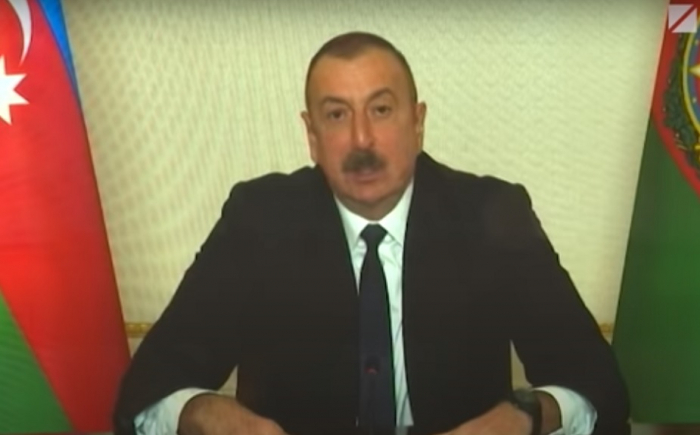 Azerbaijan will clearly separate its citizens of Armenian nationality, albeit deceived, from criminals guilty of organizing separatism, aggression against Azerbaijan, and genocide of the Azerbaijani civilian population.

Therefore, it is symbolic that on the anniversary of the Khojaly tragedy on February 26, 2021, at a press conference in video format for local and foreign journalists, President of Azerbaijan Ilham Aliyev made a special presentation of his vision of the prospects for the reintegration of the Armenian population of Nagorno-Karabakh into a single and indivisible Azerbaijan.

President Ilham Aliyev stated that the integration of Khankendi and other territories of Karabakh, where the Armenian population now lives, is an inevitable process. And this process, as well as the normalization of relations between Armenia and Azerbaijan, will benefit everyone. But in order to avoid "discrepancies" about the future fate of the primordially Azerbaijani lands of Karabakh, it was unambiguously stated that there would never be any "Artsakh":

“I spoke about this, by the way, even before the war. Because if the Armenian leadership soberly assessed the balance of forces - military, political, economic, and demographic, it would make the right decision. And our strength will only increase, including the population. And Armenia without cooperation will only weaken. Here, objectively, there simply cannot be any other. There are simply no resources for restoration without cooperation with Azerbaijan and Turkey. As they lived in the sack, they will continue to live. It's just that now this bag is no longer a bag, but such a small pouch, I would say. And that's all.

Therefore, they need to understand perfectly well that they cannot say that they have some kind of “Artsakh” state. There is no such state, and there never was and never will be. We should throw these crazy ideas aside and live normally as citizens of Azerbaijan. We consider them to be citizens of Azerbaijan who have been brainwashed. These are the war criminals who are trying to come to power in Yerevan today, they were brainwashed. They themselves do not live there. And during the war they didn't sit there, they ran away. And Sargsyan, and Kocharyan, and Ohanyan. Where are their heroic medals, which they have put on themselves as child killers, murderers of Khojaly? What did they not defend? They were born there. One is in Shusha, two are in Khankendi. " - said the President of Azerbaijan.

“We must think about the future today. And speaking of integration today, we are ready for any form of integration. Not many people live in the part where the Russian peacekeepers are now located. And in general, I must tell you too, so that there are no different figures for how many people lived there - before the war there lived a maximum of 60 thousand people. We then took the data, not from the ceiling. We took the data of objective control, including through Azerbaijani satellites, through objective observation, ”Ilham Aliyev said.

Today the Armenians of Karabakh do not need to be afraid of anything in Azerbaijan. Armenians who are citizens of Azerbaijan at their place of birth and residence should stop listening to separatists, provocateurs, and war criminals, and, if possible, break off all relations with them. And Azerbaijan will help them in this since it is already working on the future security of the Armenian-populated areas of Nagorno-Karabakh.

“A state like Azerbaijan, could it, say, not take operational intelligence measures so as not to know what is happening there? We knew and know what is happening there now. They knew during the war, and they knew before the war. And this helped us during the war, of course. And now it helps. Therefore, when now there are incomprehensible actions on the secret pass of foreigners to Nagorno-Karabakh by Russian peacekeepers, we are puzzled. We have agreed with the Russian side that foreigners can enter there only with our permission. But the agreement is being violated. I will not say more yet. Maybe I'll have to comment on this topic again. But this is a fact. That is, what I'm talking about, we practically know by name who comes there and who leaves. Therefore, today, having such opportunities, we, of course, are watching everything and will follow, ”said Ilham Aliyev.

In principle, the provocateurs and instigators, who use the Russian peacekeepers for their cover, do not have long to run around. This year, the formation of full-fledged local bodies of the Azerbaijani administration and the work of the Azerbaijani police in the regions of Nagorno-Karabakh with the Armenian population should begin. And all illegal "visitors" who are not residents of Nagorno-Karabakh will be detained and either expelled or if it turns out that they participated in the activities of terrorist and bandit formations, they will suffer deserved criminal punishment. The "freedom of movement" for terrorists who were holding civilians hostage is ending.

President of Azerbaijan Ilham Aliyev in his speech emphasized that all Christian shrines, all cultural monuments on the Azerbaijani land are under the protection of the Azerbaijani state. Azerbaijan does not prevent the Armenians of Karabakh from visiting them, such as the Dadivank (Khudavend) monastery, which was returned to its rightful owners, the Albanian-Udi community of Azerbaijan. In the future, pilgrims from other countries, including Armenia, may also come to the Christian shrines of Karabakh, if, of course, normal good-neighborly relations between the countries are established and the borders are opened.