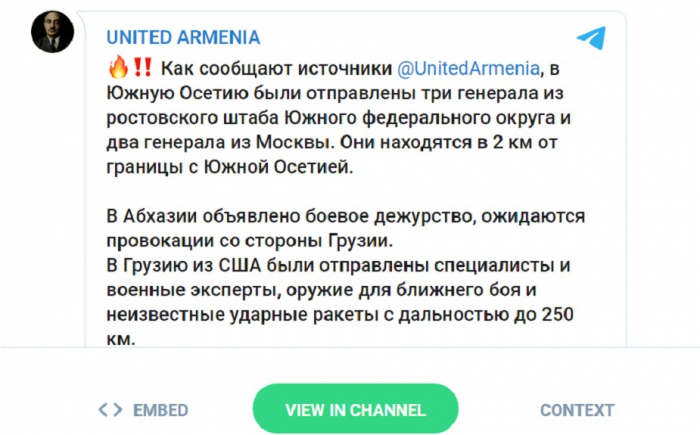 The difficult political situation in Georgia once again leads to the activation of the ill-wishers of our country. The Armenian lobby in the Russian Federation is clearly beginning to incite the Russian leadership to "seize the moment" under the pretext of "NATO threat from Georgia" and to carry out new aggression from the already occupied territories of Abkhazia and the Tskhinvali region.

It is in this vein that the information about the alleged "threat from Georgia" and "expectations of provocations from Georgia" published on the Armenian nationalist telegram channel United Armenia on the symbolic day of February 23 should be viewed. Let's remind that February 23 is the day of the Soviet Army, which 100 years ago captured and occupied the Georgian Democratic Republic, the reason for which was given by the same fifth column represented by the Armenian nationalists.

One way or another, but there is a sharp activation of the Russian Federation in the occupied Georgian lands. Here is the information verbatim:

A combat alert has been announced in Abkhazia, provocations from Georgia are expected.

Specialists and military experts, melee weapons, and unknown attack missiles with a range of up to 250 km were sent to Georgia from the United States."

It is clear that some "unknown attack missiles" are reported only in order to create a pretext for an alleged "defensive" aggression. At the same time, “horror stories” appear in the pro-Armenian mass media of the Russian Federation that the power in Georgia may be replaced “for a more pro-NATO and anti-Russian one”. Ie the reasons have already been invented.

But another thing is important - why exactly now does the Russian leadership need such new aggression against Georgia?

The fact of the matter is that in the interests of Russia, another conflict in the Caucasus in the light of aggravating internal problems is absolutely unnecessary. But this kind of aggression so that Russian troops "rode through the Georgian lands" just as they did in August 2008 are simply thirsty for the Armenian nationalists. Especially those who are betting today on the executioner of Khojaly, Robert Kocharian, and his bankrupt clique, hoping to bring them to power and help Russia to take revenge in the Karabakh war.

However, this requires the notorious "military corridor" through the territory of Georgia. Without such a corridor, an attempt at revenge will end with a new and even more shameful defeat for the Armenian aggressors.

The provocateurs are clearly "rushing things." It is important for them that the internal instability in Georgia, the confrontation between the authorities and the opposition should escalate (and the provocateurs are also working in this direction). After all, if the political situation in Georgia stabilizes, then even adventurous and delusional plans for aggression and breaking through the corridor will become more difficult to implement.