Nazism in Armenia: the desecration of the monument to the victims of the Holocaust, the Russian consulate on the street of the Nazi Nzhde 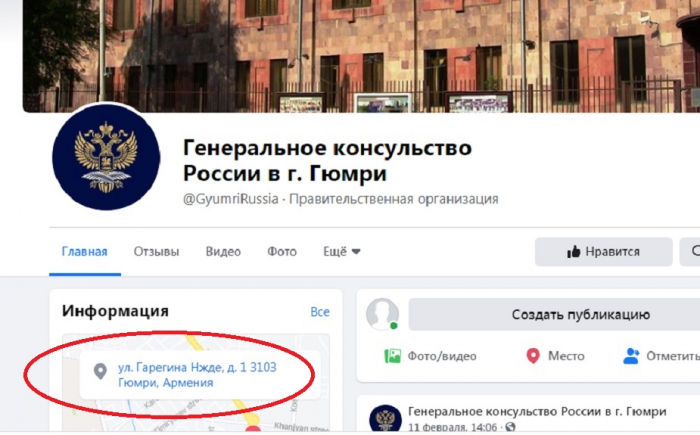 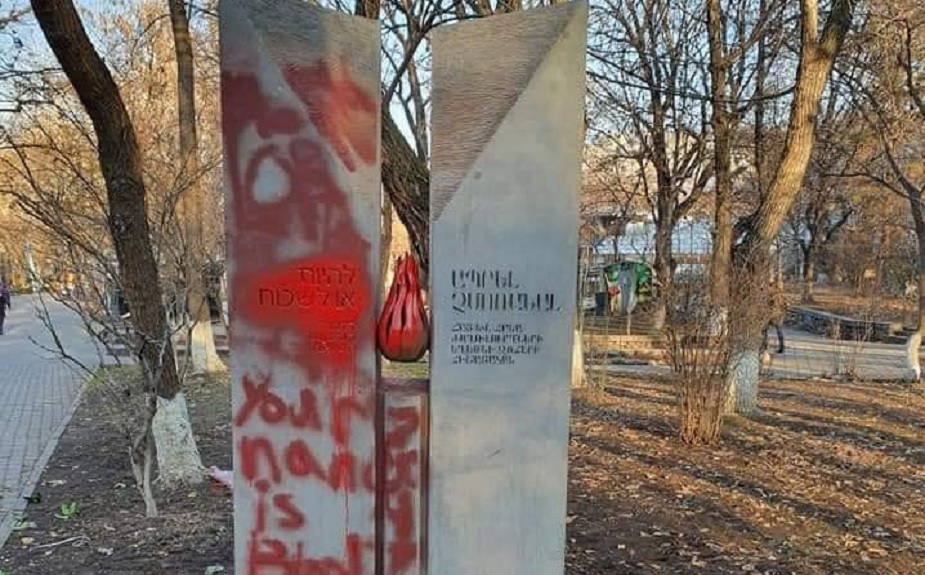 The monument to the victims of the Holocaust was opened in Yerevan in 2006, it is located in the very center of Yerevan at the intersection of Teryan and Moskovyan streets. The author of the monument is the famous Armenian architect Ruben Aruchyan. Since the Armenian nationalists consider themselves "the most long-suffering nation in the world," it is understandable that a monument to the victims of the real Holocaust of the Jewish people could not have been erected in Yerevan without recalling the myth of the so-called. "Armenian genocide".

So, during the current desecration, the “genocidal” part of the monument with an Armenian inscription was not touched. But the part dedicated to the victims of the Holocaust was covered with red paint and painted with anti-Semitic inscriptions.

So in 2021, the current desecration of a memorial to the victims of the Holocaust in Yerevan was preceded by a provocative installation of a monument to Garegin Nzhdeh on the territory of Azerbaijani Karabakh controlled by Russian peacekeepers in the city of Khojavend. And it is unlikely that both events happened "by accident", one after the other. Like many other alleged "coincidences" that well show the Nazi essence of the authorities of the Republic of Armenia, and their attempts not only to offend the Jewish people but also to "smear" the Russians with Nazism.

At the same time, Nazism and anti-Semitism in Armenia are becoming more sophisticated every time. The desecration of the monument to the victims of the Holocaust in Yerevan began immediately after its installation.

At first, the monument was simply filled with paint. 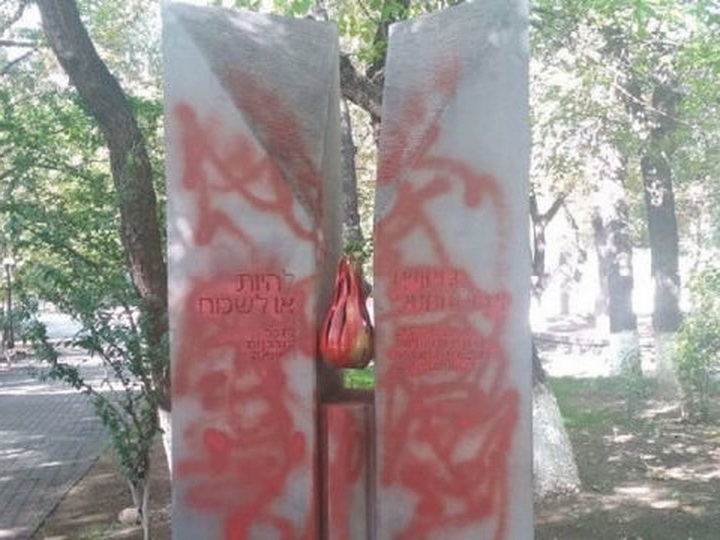 Moreover, as you can see, initially the Nazis-vandals did not differentiate between the “Armenian-genocidal” part of the monument and the part dedicated to the victims of the Holocaust.

The next desecration on October 19, 2010, became more sophisticated. Then a swastika and an inscription in Armenian "Death to a Jew" was painted on the monument with red paint. 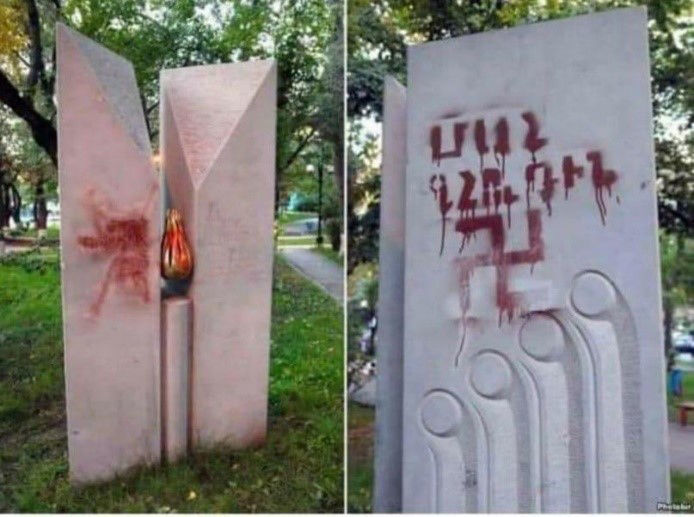 In Armenia, they did everything to “forget” this episode for information. It was only after the provocation of the Armenian military in the Tovuz region that the well-known Israeli journalist Arie Gut recalled him. He published a photo of the monument desecrated on October 19, 2010, on his Facebook page.

And the Armenian propaganda immediately reacted to this reminder. Not only did the Armenian authorities once again forced the representatives of the Jewish community, numbering only a few people, who were intimidated by them, to utter duty phrases about the alleged “absence of anti-Semitism in Armenia” - on the pro-Armenian propaganda resource Sputnik there appeared a false ordered article “There was no and there is no anti-Semitism here”: Jewish community Armenia responded to Gut's provocations ”(https://ru.armeniasputnik.am/politics/20200810/24063035/Zdes-ne-bylo-i-net-antisemitizma-Evreyskaya-obschina-Armenii-otvetila-na-provokatsii-Guta.html ) where the fact of desecration of the monument to the victims of the Holocaust and anti-Semitic inscriptions, recorded by the mass media, including the Armenian ones, was announced by ... "photoshop":

“We learned about another libel of the notorious“ journalist ”Arie Gut. Roughly using Photoshop, he presented a desecrated photograph of the monument to the Victims of Genocide and the Holocaust, which is absolutely not true. The rationale behind this action is obvious - to drive a wedge between our peoples, ”the newspaper wrote.

The cynicism of the Armenian propagandists is striking. Less than 10 years later, the fact was recorded by all the media, the photos were replicated, and here they prove that this fact allegedly "did not exist" and all this is "photoshop". But the "ancient tablets" with "ancient Armenian inscriptions" that the Armenian falsifiers inserted into the Georgian and Albanian temples assigned by them and other products of "the work of a modern Bulgarian" are declared authentic!

Also striking is the selective "long" memory in some and "short memory" in other cases among the Armenian nationalists. They remember what happened "in the time of Tigran the Great" two thousand years ago. They remember how Mesrop Mashtots “composed Georgian writing”! And here they are poked in the eyes with Nazi inscriptions in the center of Yerevan, written 10 years ago - and they completely deny them and say that this is "photoshop"

But how they deliberately "attach" the country that suffered most from Nazism in the world, Russia, to their Nazi executioners, declared "heroes", can be seen without any "photoshop". It is enough to go to the official website of the Russian Foreign Ministry, which contains information about Russian foreign missions in Armenia, including the Russian consulate in Gyumri. Here, we recall, is the Russian military base.

In the "Contacts" section, the address of the Consulate General is indicated: "3103, Gyumri, Garegin Nzhdeh st., 1". And here is the Facebook page of the consulate.
https://www.facebook.com/GyumriRussia

The building of the institution is depicted. And below the address is Garegin Nzhdeh st., 1

Those. In 2002, even during the reign of the now-posing "pro-Russian politician" executioner of Khojaly, Robert Kocharyan, the then consulate general of Russia was placed on a street named after Hitler's accomplice and war criminal.

And after that, someone will assert that “there has never been and there is no anti-Semitism in Armenia”!

Moreover, the memorial to the victims of the Holocaust is regularly desecrated in Yerevan. The Armenian authorities purposefully made sure that the General Consulate of Russia, in the key city of Gyumri from the point of view of Russian-Armenian cooperation, was on a street named after a Nazi and the executioner of the Jewish people. But the Kremlin propagandists "do not notice" Nazism in the Republic of Armenia.

And it would be fine if the family of Margarita Simonyan and Tigran Keosayan "did not notice" him. One should not expect anything else from them. But the main "fighter against Nazism" in the post-Soviet space Vladimir Soloviev, who regularly invites Armenian "experts" to his program, does not notice Nazism in Armenia either. And those, in turn, love to argue and resent the alleged "rehabilitation of Nazism" wherever possible - from Ukraine to the Baltic countries.

But here, just screaming facts: the consulate of the Russian Federation is on the street named after a Nazi, a memorial to the victims of the Holocaust in Yerevan regularly desecrated by neo-Nazis... And Solovyov, being a Jew by nationality himself, emphasizing his Jewish origin for some reason “does not notice” this? Is the money of the Armenian lobby worth it to forget about the Jews who were brutally tortured by people like Nzhdeh?

Anti-Semitism in Armenia has become as much an "organic part" of the Armenian nationalist consciousness as turkophobia and Islamophobia. Even in the report "Anti-Semitism in Armenia (2002-2006)" posted on the website of the Euro-Asian Jewish Congress, it is noted that Armenian-Jewish relations, among other things, are darkened by the exaltation in Armenia of an ardent Dashnak, General Dro (Drastamat Kanayan), who collaborated with Nazi Germany, being the commander of the battalions of the Armenian Legion.

But since then, many streets, squares, and institutions have been named after General Joe, and all of Armenia is filled with monuments to Nzhdeh. And now, according to the results of a sociological survey by the Pew Research Center, the inhabitants of Armenia among the countries of Central and Eastern Europe turned out to be the most intolerant towards Jews. Thus, Pew Research Center conducted research in 18 countries of Central and Eastern Europe from June 2015 to July 2016. And according to the published data, 32% of the residents of Armenia would not like to see Jews among the citizens of their country. This is the highest level of anti-Semitism among all the countries studied.

After the second Karabakh war, no new studies of the level of anti-Semitism were carried out. But if it had been held, then Hitler would have “envied” the level of hatred towards Jews among Armenian nationalists. Armenian terrorism knows no borders. And from the desecration of monuments, Armenian neo-Nazis and terrorists of international terrorist organizations such as ASALA may well turn to murders. As they did in relation to the Turks and Turkish diplomats.