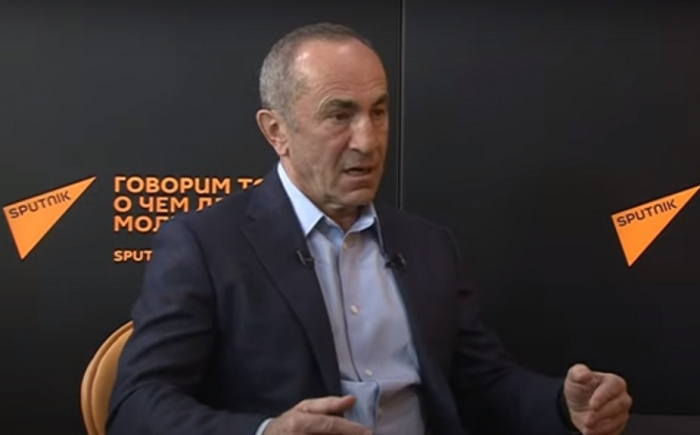 The forces of revenge in Armenia do not want to come to terms with the liberation in 2020, which has been under the Armenian occupation of Azerbaijani Karabakh for over 26 years. The Russian Armenian lobby has again become "on the rails" - to re-occupy foreign lands (both Azerbaijani and, if possible, Georgian). It was for these purposes that they, in fact, again “dragged into big politics” the bloody executioner, fascist Armenian nationalist, and one of the main organizers of the separatist movement and ethnic cleansing in Karabakh, Robert Kocharyan.

It should be noted right away - the old cannibal has clearly "passed". He does not have a trace of the former cheerfulness and "excitement", but alas, the thirst for inciting a bloody massacre, apparently, remained the same.

So, to the host's question: "Are you going to return to big politics?" Kocharian replies: “I have returned to big politics. I was absent from it for some time, but for the last two or three years, I have been here again. We now feel an intensely growing demand for predictable, understandable, and strong personalities".

Understandably, Kocharyan considers himself a “predictable, understood and strong personality”. However, the question is: does the South Caucasus region, and the Armenian people themselves, need “predictable” murderers and executioners like Kocharyan, who, without batting an eye, for the sake of thirst for power, will send the last remnants of Armenian youth “to slaughter”?

Having come to power in the Republic of Armenia on the wave of nationalist hysteria, which he himself incited by the Karabakh "miatsum", Kocharian was by all indications the organizer and beneficiary of the terrorist act in the Armenian parliament in October 1999. Suppressing the opposition movement protests Robot Kocharian established in Armenia a dictatorship of the same executioners from the "Karabakh clan" as he was.

Kocharian is the enemy, first of all, of the Armenian people themselves. It was Kocharyan and people like him who led Armenia to a dead end. Pashinyan's fault is that he resolutely did not break with the policy of Kocharyan and those like him, and immediately after coming to power, he did not go for the peaceful de-occupation of Karabakh. However, it is clear that this would not have been allowed by the infected, with the submission of the same "Karabakh clan" and the same Kocharyans, the ultranationalism of the Armenian public opinion.

Now the former leader of the Armenian "Artsakh" separatists, the instigator of the first Karabakh war, the culprit of the mass murder of peaceful Azerbaijanis, women, and children, the executioner of Khojaly is trying to shift all the blame for the Second Karabakh war lost by Armenia in 2020 on its current leadership, in the person of Nikol Pashinyan. At the same time, Robert Kocharian does not even hide the fact that he is ready to throw the whole of Armenia and the message of the Armenian people into the war. This is how one should perceive his reasoning about "total mobilization". Here is an excerpt from the interview:

“If we assume that in the fall of 2020 you would be the head of Armenia, would you repeat the same steps towards Karabakh that you took in the 1990s? Or would you choose a new vector?

- Well, first of all, I'm sure: the war would not start. A war begins in this vein when the enemy has confidence in the high probability of victory. This is not the case when a border conflict escalated into a war. It was a planned information attack, the beginning of hostilities - and it is obvious that all this was being prepared for a long time. That is, I'm just sure there would be no war. And if it did exist, it would be a total mobilization and concentration of resources to such an extent that the enemy would simply be stopped, no doubt..."

Kocharyan is sure that if he and the representatives of his "Karabakh clan" had power, would the occupation of Azerbaijani lands last forever? But in April 2016, when his accomplice Serzh Sargsyan was in power, Azerbaijan showed that it could well fight and reclaim its lands. But then the leadership of Azerbaijan gave Yerevan the last chance to leave the seized foreign land peacefully, “for good”. And even if Sargsyan remained in power, if he did not go for a peaceful de-occupation, the liberation of Karabakh by military means would still be inevitable.

Thousands of Armenian families are lucky that the leader in 2020 was the relatively sane Pashinyan, and not the deranged bloody maniac Kocharyan. Otherwise, there would be tens of thousands of young Armenians killed. By his "total mobilization" Kocharian would have staged a real genocide of the Armenian people in Karabakh. I would have thrown into the heat of war not only youths of conscription but also teenagers and old people.

And there is no doubt that such as Kocharyan would have gone to deliberate mass murders of their own, peaceful Armenian population, in order to start yelling to the whole world about "genocide" and force Russia to enter the war on their side. Considering the thirst for a revenge-seeking "big war" of Kocharian and his associates, as well as those forces that are returning him to Armenian politics, such a danger persists today.

It is also interesting that the same Kocharyan, who during all the years of his presidency supported the propaganda hysteria regarding the "invincibility of the Armenian army", has now suddenly changed his rhetoric on this issue.

Here's another excerpt from the interview:

“- There was one more thing that no one understood. Past military campaigns on the territory of Karabakh have shown if not an advantage, then at least equality in the information field. Why were people misinformed this time?

- For 44 days they lied to people that we were winning. Until the last day, there was no realization that we were losing, that we had a mass of victims, killed, wounded, that we were losing our Motherland. If people knew this, it would mobilize them. What is mobilization? This is the concentration of all resources, first of all. But even the plan for mobilizing people was half fulfilled - according to the plan that was in Armenia since the previous authorities: day one, day two, day three. How many people for which military units should go for additional equipment, what is needed to compensate for human losses, and to compensate for material losses.

But absolutely everything failed. Only the blocking of information from the population was brilliant. And we did not stand still for 30 years, fortified the front line, and the army was constantly replenished with military equipment.

- However, the new authorities have reduced the military budget...

- The new authorities have generally changed their approach to military development. So what's the problem? The new government has a certain pathological fear of the army. They themselves did not serve in the army and treated it with great distrust.

I am one of those who created this army. For the new authorities after the color revolution, the primary task was to belittle the role of the army in society, while for a belligerent country it should always be at a different level. A campaign to discredit the generals and war heroes began. They began to get rid of military officers with experience of the first and second wars. People loyal to power were brought in their place. The safety priority has been replaced by the loyalty priority. This has been happening literally since 2018..."

In reality, it was not Pashinyan who started lying about the fact that the Armenian occupation army in Karabakh is "invincible" in those 44 days of the second Karabakh war, but Robert Kocharyan. It was Robert Kocharian who fought with the help of Russian soldiers, organizing dirty and bloody crimes against the civilian population, engaging in murder and looting.

Armenian propaganda did not mention at all that it really fought for the separatists in Karabakh (as well as in Abkhazia) the Russian army “privatized” with the help of corrupt generals and politicians. On the contrary, Kocharyan's propaganda announced at every corner that “great Armenians” had won in Karabakh. It is clear that the mania for "invincibility" is from there.

Regarding the "campaign to discredit the generals and war heroes", or rather the organizers of the genocide of the Azerbaijani civilian population and terrorists, then "discrediting" is not needed here. These killers should be brought to trial, along with Kocharyan, on charges of crimes against humanity.

On the day when Kocharian gave his interview, Armenians all over Armenia tried by hook or by crook to buy tickets for flights from Yerevan. The population of Armenia is “melting and scattering”. That is, if such maniacs like Kocharyan unleash a war again, then it is not known who will fight for them. They will again have to rely on mercenaries from abroad since the Armenians simply “won't have enough”. And for whom will they conquer foreign lands for their “great Armenia”, if in the Republic of Armenia itself outside of Yerevan everything is empty.

The Armenian people themselves are beginning to see clearly and sane Armenians feel nothing but hatred for Kocharyan. Here are the comments of the Armenians under the video of Kocharian's interview posted on YouTube:

“Kocharyan's trump card was a gamble with Karabakh, on which he gathered all possible dividends for himself. Now he has nothing to rely on, except perhaps on that part of people who have lost their privileges ...

... He plundered the entire republic, and now he is reasoning. Robik jan, humiliated his people for 20 years, but now you are not guilty? Shame…

… So many young guys from the Armenian side died, and he is lying, he says that only the participants of the first Karabakh war and Karabakh people didn’t fight the young. Where did so many people die in Armenia itself? A liar, a thief, a scoundrel !!!"

And there are many other comments on social networks, in the same spirit.

Most importantly, Robert Kocharian and his accomplices have not yet been held accountable for their crimes against humanity, which, as you know, have no statute of limitations. For ethnic cleansing of the peaceful Azerbaijani population of Karabakh and the genocide of the population of Khojaly.

Therefore, people like Kocharyan are afraid of panicky reconciliation between Armenians and Azerbaijanis and normalization of relations between neighboring countries, since the question of the responsibility of those responsible for the huge sacrifices will immediately arise.