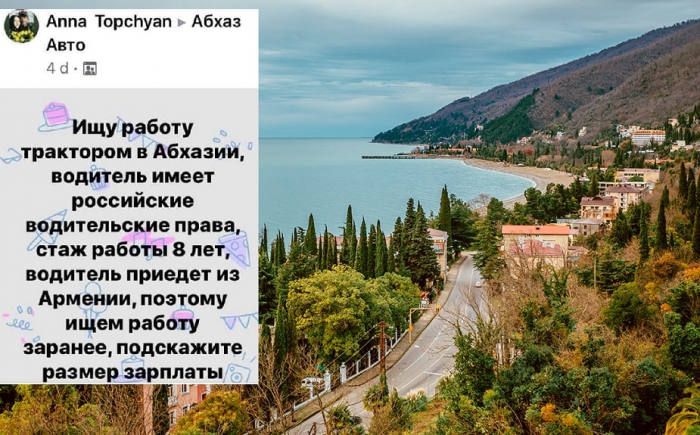 As “Kavkaz Plus” predicted after a mass “exodus of Armenians” began from the Republic of Armenia with the opening of regular flights between Yerevan and the cities of the Russian Federation on February 1, 2021, separatist Abkhazia became one of the main directions of this exodus. Clearly, there are no exact statistics on crossing the border on the Psou River by persons of Armenian nationality and Armenian citizenship. But judging by the activity of social networks, there are thousands.

And this is just the beginning. Those who have not yet moved to Abkhazia from Armenia, but have such an intention, are already "preparing the ground" for this either through the Krasnodar and Abkhaz Armenians. Or, again, through social networks, trying to resolve the issue of housing and work.

For example, an interesting request was made by a certain Anna Topchyan in the Abkhaz Auto group on the Facebook social network, whose husband, judging by the profile photo, until November 10, 2020, fought as part of the Armenian occupation forces in Azerbaijani Karabakh and who, apparently lucky - he remained alive and even efficient. Now, apparently, Anna Topchyan and her husband are going to move to the occupied Georgian Abkhazia, and she is interested in working for her husband:

The most interesting thing is that at the beginning of the Second Karabakh War, a map was published on the page of the same Topchyan, where most of Azerbaijan was painted over as "Armenia" and the rest was divided into separatist "Talysh", "Lezgin" and other formations. 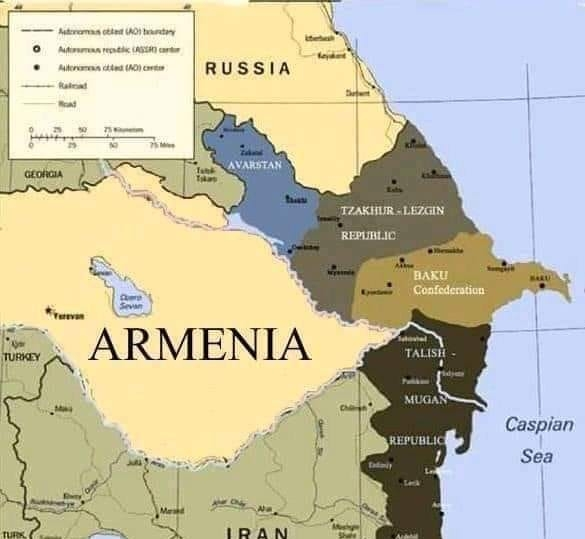 But the defeat of the Armenian invaders, apparently, forced those who dreamed of a "great Armenia" in the Azerbaijani lands to urgently change their plans. And now, in their dreams and plans, they will divide Georgia and turn the Georgian lands into "Armenia".

In the same group, other Armenians are asking questions about moving to Abkhazia. So, for example, Christina Avetisyan asks: "Tell me, can you cross the border with whom is Armenian citizenship?"

Such questions and inquiries of Armenians about moving to Abkhazia are only “the visible part of the iceberg”. There are many more Armenians who are also going to move to Abkhazia, but especially "do not shine" their intentions in social networks, especially those who have relatives or acquaintances among the Abkhaz Armenians or whose relatives have already "quietly" moved to Abkhazia after the start second Karabakh war.

It is obvious that the process of settlement of Abkhazia by Armenians is acquiring an uncontrolled and “avalanche-like” character. And before the Abkhaz have time to look back, their separatist "independent state" can be calmly renamed into "seaside Armenia". And it is unlikely that more than 1% of non-Armenians, including Abkhazians, will remain in this "Armenia" over time. Only the elimination of the separatist entity, the de-occupation of Abkhazia, and its reunification with Georgia will save the Abkhaz people from the gloomy prospect of genocide and exile.