The “great exodus” of Armenians to Russia will pass through Georgia. 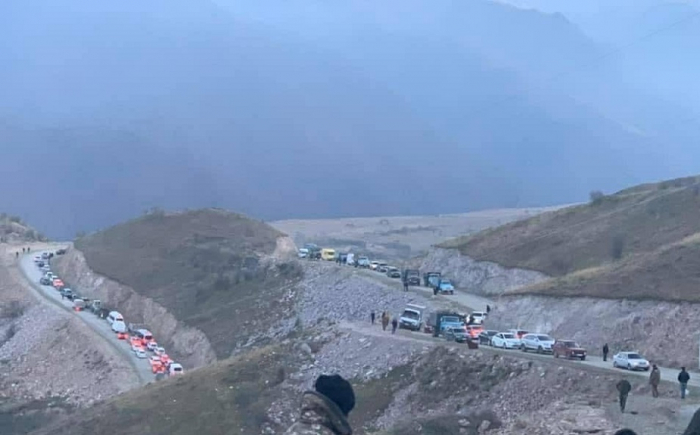 Among the Armenian nationalists, the myth of the “Great Surgun” (red. exodus) plays an important role as one of the historical myths “substantiating” their claims to Azerbaijani lands. Allegedly, the Armenians constituted the "overwhelming majority" in the territory of historical Iravan, Nakhichevan, and Karabakh, but at the beginning of the 17th century, Shah Abbas evicted them all deep into Iran. The fact that the Armenians were really an insignificant minority (and in Karabakh, there were none at all!) And were moved deep into the Safavid state, where, first of all, the Turkic (Azerbaijani) tribes lived, "historians" -falsifiers, naturally, do not speak.

After the defeat of the Armenian aggressors in the second Karabakh war, it looks like the "Great Surgun", this time real and voluntary, is outlined from the Republic of Armenia. Judging by the mood on social networks, there is no such Armenian family where someone did not want to leave Hayastan forever.

Moreover, many families have already “planned” that those who leave, for example, to Russia, will try to “catch on” and settle down there, and then attract the rest of the household after them. “There are no prospects in Armenia”, “we must leave” - such sentiments are spreading more and more among its citizens, moreover, like an avalanche.

Social psychosis can be not only on the basis of nationalism but also on the basis of disappointment with its sad consequences. As a result, the sentiments "to flee from Armenia at all costs" seize the Armenians, and panic rumors that "Armenia has already been sold to the Turks" only spur them on.

After the announcement of the opening of the borders on February 1, 2020, the phones of the Armenian airlines literally do not stop. Thousands of citizens are trying to get detailed information and buy a ticket as soon as possible to leave for the Russian Federation. Ticket prices skyrocketed.

The Armenian newspaper "Past", in particular, writes:

“As you know, due to the coronavirus pandemic, many travel restrictions have been introduced since last year. States have literally closed their borders, with a few exceptions. On February 1, the program "Travel without covid-19" starts, which will be pilot until March 1.

It became known yesterday that the governments of Armenia and Russia agreed that if the test for coronavirus is negative, Armenian citizens will be able to fly to Russia to certain airports, the list of which was published by the Russian government, ”the statement reads.

However, a toilet unscrewed in Kelbajar cannot be transported by air, its weight can exceed the baggage allowance. Therefore, along with those wishing to fly away, there are even more among the citizens of the Republic of Armenia those who want to leave the "historical homeland" where their ancestors appeared only some 190-100-70 years ago, by land. Including "loading to the eyeballs" their own cars.

Tens, if not hundreds of thousands of today's residents of Armenia are just waiting for the opening of the Armenian-Georgian and Georgian-Russian borders in order to rush to Russia in transit through Georgia by land.

In the near future, the residents of Georgia may become witnesses of an epoch-making historical event - "the great migration of the ancient people" or "the great exodus of the Armenians" from one "historical homeland", from the present Republic of Armenia to the "new historical homeland", substantiation of the "antiquity and primacy" of the Armenians on which Armenian historians have already begun to compose.

As a result, the demography of the Caucasus could undergo drastic changes.

Firstly, the current real population of the Republic of Armenia, numbering at best 2 million people (with the “official” 2.9 million), can simply “halve”. Those. before Armenia, if it does not rush to unblock the borders according to the agreements previously reached with Azerbaijan and does not open transit to Nakhichevan (which will give Armenia hope for the revival of the economy), it faces the sad prospect of becoming a desert territory. Especially when you consider that the overwhelming majority of residents remaining after the mass exodus will “gather in Yerevan”. The rest of the territory of the Republic of Armenia, with the exception of a few large cities, which still have at least some production facilities, will be empty.

Secondly, the Armenian population of the Russian North Caucasus, already not small, will increase dramatically. Krasnodar Territory is especially attractive for Armenians.

Naturally, part of the flow of Armenian migrants will go to the occupied Georgian Abkhazia. Here, according to some sources, in addition to the more than 120 thousand Abkhaz Armenians already available, at least 20 thousand “refugees” - separatists from Karabakh liberated by the Azerbaijani army - have already moved in quietly.

All this makes the already not optimistic prospects of the Abkhaz ethnos simply catastrophic - they can meet the new holiday season as an insignificant minority in the “new seaside Armenia”.

Thirdly, passing through the territory of Georgia in transit, Armenian nationalists can "in their repertoire" arrange some kind of sabotage or sabotage against Georgia. We must not forget about the Metsamor nuclear power plant and the huge volumes of radioactive waste and radioactive substances associated with it. We must not forget about the Armenian separatist underground in Samtskhe-Javakheti and the danger of supplying the territory of the Republic of Armenia with weapons and ammunition. Therefore, all the Armenian "travelers and migrants" traveling in transit to the Russian Federation and their luggage and cargo will be the subject of great attention of the Georgian law enforcement services.