Georgia prevented the sending of military aid to the Armenian occupants 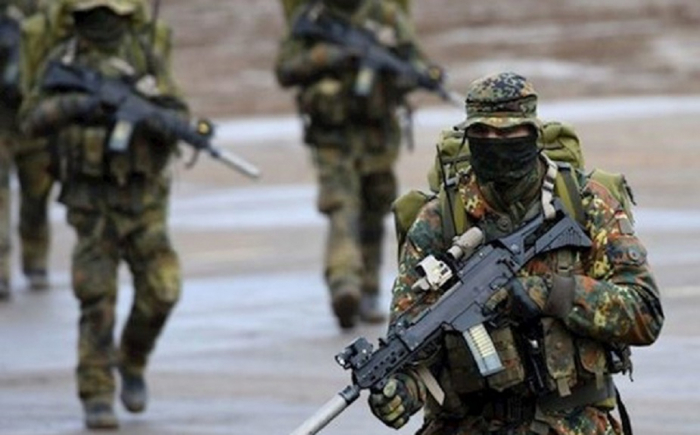 Recently, ex-Minister of Defense of Armenia David Tonoyan admitted in an interview that in reality, Russia throughout the entire period of the Second Karabakh War tried to help the Armenian army as much as it could. According to him, during the war, Russia did its best to fulfill its allied obligations;

“Throughout the war, I was in constant contact with Russian Defense Minister Sergei Shoigu. There were days when we talked on the phone several times a day. Russia has done its best to fulfill its allied obligations. Moreover, in addition to purely defense issues, thanks to constant working relations with the Russian Defense Minister, it was possible to resolve a number of other important issues, "David Tonoyan said in an interview with Mediamax.

At the same time, Russia could not directly engage in open hostilities, since the hostilities were conducted exclusively on the non-Armenian territory. Everyone understands perfectly well that if there was such an opportunity, Russian troops could participate on the side of Armenia, just like they participated in the east of Ukraine under the guise of "militias and volunteers."

The swiftness of the offensive of the Azerbaijani troops did not allow the occupants to hold their positions and transfer the mercenaries under the guise of "militias". Although there is information - the transfer of mercenaries from the Russian Federation to Karabakh for the war in Karabakh on the side of Armenia was not only discussed but also part of it was transferred. But the Azerbaijani army quickly cut the only road connecting Khankendi with Armenia, and it became obvious to those who planned to transfer troops to help the invaders that the Armenian occupation group was doomed.

Nevertheless, if Russia and Armenia could somehow solve the problems of logistics and the transfer of mercenaries, it is not yet known how quickly and when the war would end. This was indirectly admitted by the same David Tonoyan, who in an interview with Mediamax admitted the fact "... insufficient assessment of the risks of direct involvement in the military actions of Turkey, the massive involvement of mercenaries and the complete blocking of supply routes ..." to Armenia. And if “attracting mercenaries” is propaganda nonsense, then blocking military supplies to Armenia through Georgia was a fact.

The absence of a common border between Russia and Armenia played an important role in the liberation of Azerbaijani Karabakh. It also becomes clear why it was problematic to do this before.

Recall that in the south of Georgia, including in Akhalkalaki, there were two military bases of the Russian Federation, the supply of which and the transfer of troops was carried out through the territory of Georgia. The withdrawal of the 62nd military base from Akhalkalaki was completed at the end of June 2007. The last train with the Russian military left Georgia for Armenia on November 15, 2007.

Therefore, an attempt to liberate Karabakh by military means at that time would have led to the fact that Russian troops would have been transferred through the territory of Georgia to Akhalkalaki, then to Armenia, and then to Karabakh. From the point of view of logistics, there would be no problems at all. And Russia could not ask Georgia at all.

However, the Armenian lobby decided to carry out a kind of "legalization of separatism" and create precedents on the territory of Georgia for which the 2008 war was organized. Interestingly, the war was not organized until the military bases were in the south of Georgia, since the country was in fact partially occupied. But after the withdrawal of the Russian bases, they began to rapidly prepare for war and the complete occupation of Georgian Abkhazia and the former "South Ossetia". Since the Armenian lobby looked after Abkhazia for itself, the "main military training ground" was Tskhinvali and its environs, where the ethnic cleansing of the Georgian population was carried out. In Abkhazia, the seizure of the Kodori Gorge was also organized "on the sly".

It is clear that the August 2008 war was aimed not only at humiliating Georgia and occupying its territories, but was also arranged in order to show that Russian troops can safely "roll" on Georgian territory. It was shown that in the same way as they captured Gori, Senaki, and other Georgian cities, in the same way, they can pass, breaking through the "military corridor", to the border of Armenia.

Therefore, until 2008 and after that, everyone was well aware that in the event of an aggravation of the situation in Karabakh, Russia, dependent on the Armenian lobby, could well transfer troops through Georgia, without particularly asking the opinion of the Georgian side.

Furthermore: in 2014, the Crimean precedent arose. Again there was a trampling by Russia, at the suggestion of Lavrov-Kalantarov, of the international principle of the inviolability of borders and integrity. The war in Donbas, as we have already noted, was accompanied by a real invasion of the Russian army under the guise of "militias". However, then Russia got involved in the war in Syria, and the situation became somewhat more complicated.

The fact is that the weak point in Russia's support for the current Syrian government is weak logistics. The supply of the military group in Syria passes through the Turkish straits of the Bosphorus and Dardanelles. That is, for the first time militarily, Russia has found itself dependent on a country whose military potential does not allow treating it as “frivolously” as with Georgia and Ukraine, without putting their interests at all. Moreover, a quick and complete victory in Syria did not work out. Russia is still forced to support the Assad regime "on its own bayonets" and any interruption in the supply of the Russian Syrian group means the complete defeat of the Russian expeditionary force.

Today Georgia is close enough to join NATO. And in 2020, NATO countries would hardly have allowed Russian troops to also drive around Georgia, as they did in 2008. In addition, assistance to a CSTO ally who is not attacked and who is waging a war in a foreign territory occupied by him is not a reason to violate the sovereignty of a third country and not an excuse for NATO countries to violate the territorial integrity of Georgia. Then, in 2008, the "excuse" for Russia was that its troops were on Georgian soil as "peacekeepers" who were allegedly "attacked", and in 2020 it was not possible to create even such a strained pretext to break through " military corridor "to Armenia.

One way or another, the Armenian lobby missed the moment when the opportunity to use the Russian car disappeared without violating the norms of international law. Moreover, in the world due to the coronavirus epidemic, the US elections, and some other trends, no one wanted to unleash a big war in the South Caucasus. Therefore, it was necessary to supply the Armenian grouping in Azerbaijani Karabakh with very complex, costly, and time-consuming routes.

The most important thing is that the rapid offensive of the Azerbaijani army and its achievement of strategic successes nullified the hard-won strengthening of the Armenian occupation group with mercenaries and modern weapons. After the capture of the city of Shusha, it became obvious that even with the indirect involvement of Russian PMCs and mercenaries in the war under the guise of "volunteers and militias" it would not be possible to turn the tide of the war.

Russia did not dare to break through a military corridor through the territory of Georgia, fearing a negative reaction from NATO countries, especially Turkey, which could also quickly block the Bosphorus and the Dardanelles for the Russian group in Syria.

As a result, inciting conflicts wherever possible, dragging the same Assad regime into an adventure with the "recognition" of the separatists of Abkhazia and Tskhinvali, supporting separatism everywhere and making Georgia a victim of the occupation of the Armenian lobby, created a situation where the international community simply would not have become put up. Thus, the Armenian lobby itself signed the verdict to its "Artsakh" project.

In fact, the Armenian nationalists have outplayed themselves. And now, having politically gone bankrupt, they, nevertheless, do not lose hope of again attracting Russian bayonets to help, and calls for revenge can be heard from Yerevan.