How the Armenian lobby "missed" Navalny 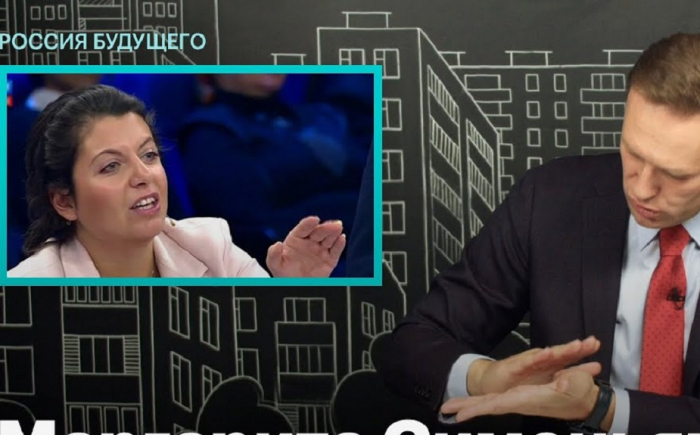 It is known that most of the adventures of the Armenian nationalists were relatively successful only thanks to the help of Russia. And the Armenian lobby sought this help primarily by “finding an approach” to the leaders of the Russian state.

At one time, a gamble called "miatsum" (demanding the annexation of Azerbaijani Nagorno-Karabakh to Armenia) was launched after Armenian nationalist leaders managed to penetrate the inner circle of the last leader of the USSR, Mikhail Gorbachev (we are talking about academician Aganbegyan and a number of other personalities). At the same time, realizing perfectly well that the USSR is doomed (the Karabakh conflict was just crumbling it!), Armenian nationalists simultaneously "huddled" promising politicians who would later become the head of the Russian Federation. Thus, the husband of the Armenian nationalist Elena Boner (Alikhanyan), Andrei Sakharov, and Boris Yeltsin were at one time among the first five co-chairs of the so-called Interregional Deputy Group, which was opposed to the Soviet leadership.

Under Boris Yeltsin, the influence of the Armenian lobby increased even more. There is also an assumption that the disobedient Armenian nationalists Prime Minister Viktor Chernomyrdin, who was initially considered by many to be Yeltsin's successor, did not become him thanks to the Armenian "well-wishers". Chernomyrdin once let slip that the Armenians of Nagorno-Karabakh need to agree to the status of autonomy within Azerbaijan, which ultimately ended his career.

True, all this did not help the Armenian occupants to keep Azerbaijani Karabakh in the war of 2020, they suffered a crushing defeat. But from revenge and the idea of ​​"great Armenia" in foreign lands, the Armenian nationalists do not even think to find themselves. They still dream of carrying out their adventures with the help of Russia. But here we have to admit that the representatives of the Armenian lobby have changed their former "instinct" regarding the tendencies in Russian politics. They can be said to have "missed" the most likely candidate who can replace the same Vladimir Putin in power in the Russian Federation.

True, even some 2 weeks ago, Armenian nationalists were sure that they had more than enough time to place bets on Putin's successor. Still, last year amendments were made to the Constitution of the Russian Federation, "nullifying" the previous presidential terms of the current Russian leader, and thus he could well have been president for another 12 years in a row after 2024. Those. it was assumed that there is at least 15 more years left. But in the second half of January, events in the Russian Federation began to develop so rapidly that even the most convinced supporters of Vladimir Putin lost confidence that he could stay in power after 2024. Well, some suggest that the change of power could happen even earlier.

It all started with the fact that on January 17, 2021, opposition politician Alexei Navalny was detained by the Russian authorities while passing border control at Moscow's Sheremetyevo airport. The politician returned to Russia from Germany, where he was treated and recovered from the effects of poisoning, in which he blamed the FSB. In social networks, a wave of indignation arose among Russian users over the arrest of Navalny, and his popularity began to grow rapidly. Interest in the personality of the opposition grew even more (as did dissatisfaction with the current government) after the release of Navalny's investigation about the luxurious palace in Gelendzhik, which, as reported, through proxies, is owned by Russian President Vladimir Putin. As a result, mass events in support of Navalny on Saturday, January 23, were held in 66 cities of Russia and gathered hundreds of thousands of citizens, mostly young people. People demanded that he release the opposition politician from arrest. The police had to take harsh measures - in total, about 3.2 thousand protesters were detained.

Quite unexpectedly, they started talking about Navalny as the most likely future leader of the Russian Federation. And for some, the question is not whether Navalny (or another opposition politician like him) will come to power, but when and how this will happen - in the elections in 2024 or earlier through the "Maidan". Fortunately, many remembered how the same Navalny greeted the "Maidan" in Armenia in 2018 that brought Nikol Pashinyan to power and caused terrible discontent with the Russian Armenian lobby associated with the "Karabakh clan" that previously ruled in Yerevan.

At the same time, he sympathized with Navalny Pashinyan precisely as a “Maidan revolutionary”, and not because of his belonging to an “ancient cultural nation”. In Russia itself, some of the "ancient" close to Putin got from Navalny - in particular, he "walked" heavily on the Kremlin propaganda in a video clip enlightened with the schemes of Margarita Simonyan and Tigran Keosayan. This caused even greater hatred of the pro-Armenian media in the Russian Federation. The video clip under the eloquent title "Parasites", released in early 2020, gained more than 9.5 million views:

But that was when Navalny's chances of coming to power were not yet taken seriously. After January 23, 2021, everything changed. It became obvious that there are chances, and the West can bet on Navalny, and if he is somehow "neutralized" - then on his wife.

As a result, the Russian part of the Armenian lobby, which had previously been "loyal Putinists", began feverishly to seek "approaches" to Navalny. And it turned out that they do not have much of them. Moreover, they simply ignored this politician from 2011-2012, when he appeared brightly on the Russian political horizon and considered it "frivolous." After all, he was "just a blogger."

Navalny was even “written off” after, with the help of Sergei Kurginyan, the same Putin managed in 2012 to gather huge rallies in his support, against the background of which the rallies organized by the same Navalny on Bolotnaya Square in Moscow were frankly few in number.

An indicator of the fact that the Armenian lobby did not at all engage in “enlightenment” about his “uniquely ancient and long-suffering nation” by Alexei Navalny was his post on his website about the 100th anniversary of the so-called “Armenian genocide” under the eloquent headline “100th anniversary of the genocide. 20 minutes of reading will be a good tribute to the memory "(https://navalny.com/p/4216/). The very formulation of the question angered the Armenian nationalists. How is it so - to devote only “20 minutes” to the exceptional suffering of the Armenians ”a myth about which the pro-Armenian media in the Russian Federation on the eve of this date“ promoted ”with might and main.

And the very attitude of Navalny to the myth of "genocide" can be seen from this passage:

“I can bet that 90% of those reading this text know about the Armenian genocide no more than I knew about it a week ago: well, Armenians lived in Turkey, they were killed. Mass slaughter, not the first and, alas, not the last in the history of mankind. Now the Turks refuse to recognize it as genocide, and the Armenians around the world are pushing laws on its recognition. Their dispute is understandable, but such a movement after a hundred years looks strange. And when you start reading testimonies and looking at documents/photographs, your blood runs cold, and it’s clear why is this "dvizh" (slang- means movement).”

In general, Navalny knew nothing about the notorious "genocide" in the Armenian interpretation, when the Armenian lobby began to impose information about this myth "from every iron" on the notorious "100th anniversary of the genocide." I looked through the information they had collected, sympathized with the Armenians, but not quite "seriously" and not so much the Armenian propagandists had hoped for. But rather “in a youthful way” - whence this slang word “dvizh” (in this word itself - a hint of doubts about the reliability of Armenian information). That is, if, for example, the Turkish side provided the information to Navalny (much more reliable), then he would easily change his mind.

All this speaks about the "puncture" of the Armenian strategy in identifying "promising politicians" and working with them.

Navalny's support for the Yerevan Maidan led by Pashinyan also did not add points to the Russian oppositionist in the eyes of high-ranking representatives of the Armenian lobby in Russia. And especially when in the summer of 2020, literally on the eve of the second Karabakh war, in the conditions of an information blockade in the Russian media, Pashinyan gave Navalny an opportunity to enter the air of the Public Television of the Republic of Armenia criticizing the voting on amendments to the Russian Constitution.

But after the second Karabakh war, and especially after it is now more and more likely that the current anti-Putin opposition may come to power in Russia, it became obvious that the Armenian lobby has practically not “evolved” since the 80s and 90s of the last century. Just as in the military sphere the Armenian army was not ready for the massive use of unmanned vehicles, the Armenian lobby also completely missed the development of political technologies. And as a result, they “missed” possible changes in the Russian ruling elite. Not to mention the fact that while the Kremlin propagandist Tigran Keosayan "sawed" budget money on his "sawmill", Navalny easily nullified all his propaganda among the widest layers of Russian citizens with spectacular videos and posts on social networks.

Now, most likely, we will witness the feverish “changing shoes in the air” of the Armenian lobby. There are first signs of this - the Sukhumi separatists, so completely dependent on the "ancient nation", unexpectedly, on the most decisive day of January 23, abandoned their planned rally in support of Putin, as Kavkaz Plus has already written about. Such a decision would hardly have been made without the agreement of the Armenian lobby.