The communication between liberated Karabakh and Nakhichevan will be unblocked. The next step is the liberation and unblocking of Abkhazia and Tskhinvali! 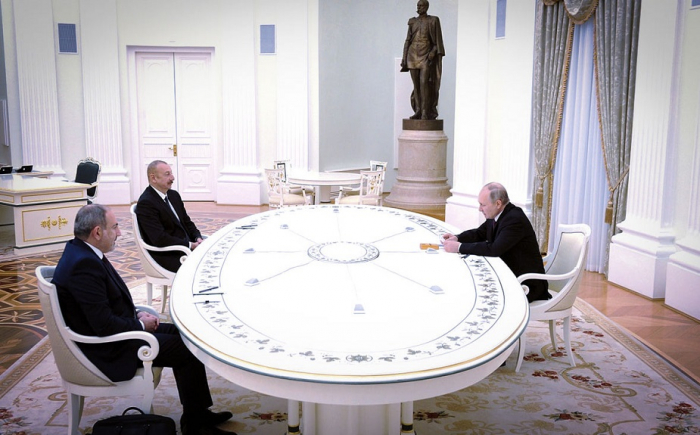 The meeting of the Presidents of Azerbaijan, Russia, and the Prime Minister of Armenia in Moscow on January 11, 2021, was marked by significant progress in the full and final "unblocking" of the South Caucasus, overcoming the consequences of separatism, ethnic cleansing and the occupation of foreign territories. Following the meeting, the following was accepted:

1. In order to implement paragraph 9 of the Statement of November 9, 2020, in terms of unblocking all economic and transport links in the region, the proposal of the President of the Russian Federation V.V. Putin on the creation of a tripartite Working Group under the joint chairmanship of the Vice-Prime Ministers of the Republic of Azerbaijan and the Republic of Armenia is supported and Deputy Prime Minister of the Russian Federation.

2. The working group will hold the first meeting until January 30, 2021, based on the results of which it will form a list of the main areas of work arising from the implementation of paragraph 9 of the Statement, setting railway and road communications as priorities, and will also determine other areas as agreed between the Republic of Azerbaijan, the Republic Armenia and the Russian Federation, hereinafter referred to as the Parties.

3. In order to implement the main directions of activity, the co-chairs of the Working Group will approve the composition of the expert subgroups in these areas from among the officials of the competent authorities and organizations of the Parties. The expert subgroups, within a month after the meeting of the Working Group, will present a list of projects with the justification of the necessary resources and activities for their implementation and approval at the highest level by the Parties.

Thus, according to the results of the agreements in Moscow, Karabakh, and Nakhichevan, recently liberated from the Armenian occupation, are still “unlocked”, which will be connected by communication through the Zangezur, which is under the control of the Republic of Armenia within its internationally recognized borders.

But this is just the beginning. The next step is the restoration of the territorial integrity of Georgia and the unblocking of transport routes through Abkhazia and the Tskhinvali region. And the sooner full-fledged transit to Nakhichevan is restored, the sooner Russia and Armenia itself see the positive from this process, the earlier the de-occupation and unblocking of Abkhazia and Tskhinvali will begin.

The fact that the parties agreed already from March 1 to determine the main parameters of the transport corridor, primarily the corridor through the Republic of Armenia, between the main territory of Azerbaijan and Nakhichevan suggests that the process will go very quickly.

At the same time, the Armenian public opinion, which painfully perceived the defeat in the Karabakh war, will have to accept the fact that it is necessary to live in harmony with its neighbors. Moreover, the President of Azerbaijan promised the Armenian side a direct connection through the Azerbaijani territory with the main economic partner - Russia, including by rail.

Moreover, if the railway fully functions, linking Russia, Azerbaijan, and the territory of Turkey, it will benefit all countries in the region. Armenia will come out of the economic and geopolitical impasse. It will find itself at the crossroads of promising transit routes, which will give certain hopes for the recovery of the economy, which is in a state of collapse.

In fact, the Armenian leaders who today accuse Nikol Pashinyan of betrayal and called for a new war and revenge must understand that a new war will be a final disaster for the Armenian state. Today the question is: will Armenia be adapted to accommodate at least 2 million of the remaining population? And if the borders with neighbors are not open, the population will rapidly leave Armenia, and it will be completely empty.

In principle, many Armenians already “sit on suitcases”. In Armenian social networks, the citizens of Armenia share with each other their thoughts that there is no future in Armenia, no work, no prospects, and most importantly, there is no longer something for which to sacrifice. After all, occupied Karabakh was a kind of fetish, part of the Armenian nationalist religion. The Armenians were called for "patience" not only for the retention of Karabakh but for the further expansion of "great Armenia" at the expense of neighbors on the Karabakh model. Today it is obvious that these plans have suffered a complete and final collapse. There will be no "great Armenia" and there will not be any annexation of new lands to the Armenian state beyond the internationally recognized borders. The Armenian national consciousness must come to terms with this and forget not only about "Artsakh", but also about plans to create a new "Armenia" in Georgian Samtskhe-Javkheti and Abkhazia.

Very well, after the trilateral meeting of the Presidents of Russia, Azerbaijan, and the Prime Minister of Armenia, making a statement for the press, the President of Azerbaijan Ilham Aliyev described its results. Here is an excerpt from his introduction:

“Two months have passed since the ceasefire, and the fact that today the leaders of the three countries that signed the Statement of November 9-10 have gathered in Moscow suggests that we are committed to a result, determined to draw a line under those actions that took place in September-November. The statement that was signed today speaks of our intentions because one of the points of the statement following the cessation of hostilities was the unblocking of transport communications. This is an area that can give very great dynamism to the development of the region, as well as strengthen security.

Because the opening of transport communications meets the interests of the peoples of Azerbaijan, Armenia, Russia, and our neighbors. I am sure that neighboring countries will also actively participate in the creation of transport corridors and an extensive network of transport arteries in our region.

We must continue to strive to find those areas of activity that would give a quick effect and are focused on results. In general, I would like to say that the joint Statement of November 9, according to Azerbaijani time on November 10, is being implemented successfully. Most of the points in this Statement have been implemented. The Russian peacekeeping mission is doing its job effectively, and in 2 months, with the exception of minor incidents, there were no serious reasons for concern. All this instills confidence that, as Vladimir Vladimirovich once said, the Nagorno-Karabakh conflict is a thing of the past, and we must think about the future, about how to live together in the neighborhood, how to strive to resolve the issues of unblocking transport arteries and in the future to strengthen regional stability and security. "

So - the Nagorno-Karabakh conflict is already in the past. And its successful economic restoration of the region will also contribute to the fact that, by analogy, the conflicts in Abkhazia and the Tskhinvali region, which bring problems to Russia, also remain in the past.