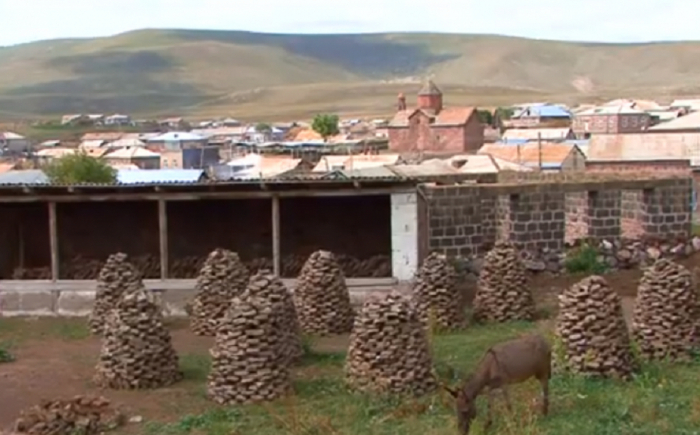 Lake Paravani and its surroundings is a sacred place for all of Georgia, for every Orthodox Georgian. By its significance, it is similar to the ancient capital of the country - Mtskheta. After all, it was from the shores of Lake Paravani that St. Nino began her journey through Georgia. From here began the conversion of Georgia to Christianity!

Therefore, there is a tradition of a 40-day pilgrimage along this route. This year even the President of Georgia, Salome Zurabishvili, began this journey along with the pilgrims.

Historically, no Armenians in the vicinity of Lake Paravani have ever lived. All Armenian legends about “Lake Parvana” are nothing more than literary tales not historically supported by anything.

Armenian settlers appeared here only in 1830 and arrogated to themselves the ancient Georgian churches. With the establishment of Soviet power, these churches were abandoned or turned into utility rooms. Including in the church in the Armenian village Poka while they kept cattle. Armenians, in principle, did not return the church that was best preserved to the Georgians. Today there is a hayloft in this church (and perhaps they still keep cattle in a holy place!).

This is evidenced by the material: “Why is the hayloft in the Armenian Church of Javakhk?” (infoteka24.ru)

“Karanfilian’s new film“ Treasures of Javakhk - Lake Parvana ”(youtu.be) tells about the history and current state of the ancient Armenian province of Javakhk. Among other things, the author is concerned with the outrageous fact recorded by him in the village of Poka.

At present, Armenian peasants use the local church as a hay storage. However, this is not the desecration of the shrine, but its salvation, since after the collapse of the Soviet Union, the Georgian government is pursuing a policy of Georgianization of religious buildings, declaring Armenian churches Georgian. To take over the church at least in some way was the only chance to save her from such a fate. Now the temple is repaired, it is dry there, and its decoration has the opportunity to remain in its original form until better times.”

Also in the film are repeated false anti-historical theses that Samtskhe-Dzhvakheti is supposedly “Armenian land”, which, they say, was historically “part of Gugark province of great Armenia”. And naturally, not a word is mentioned of what great spiritual significance Samtskhe-Javakheti and especially Lake Paravani has for all of Georgia.

It’s a paradox, but when the revival of Orthodox shrines began in Georgia, the Armenians did everything not to give up the church in the village of Poka for Georgians. Moreover, they did everything to prevent the restoration of an Orthodox monastery on this holy place for every Georgian.

Here is what the Georgian blogger David Vartumashvili writes (vartumashvili.com):

“In the Armenian village there are two Georgian monasteries, male and female, both named after St. Nino. Male is a little apart, separate from the village, it is modern and does not interest tourist. Female, known throughout the country, occupies a hill in the middle of Poka and has a remarkable history. It began with the fact that the Catholicos-Patriarch of All Georgia Ilia II in 1988 acquired an old house in a village next to the church and registered it in order to be able to visit these places, which at that time had the status of a border zone and were not accessible. When, in 1992, Mother Superior Elizabeth and two novices arrived at Poka to found the monastery, the patriarch’s house was occupied by an Armenian family. The first years of the nuns were neighbors with these people, dividing the room with curtain. These were the years of survival. Revival began only in 2001."

On the Georgian land at the very time when Armenian militants in Abkhazia kill and evicted Georgians from their homes, the Patriarch of Georgia and the nuns of the monastery he founded cannot dispose of the house they legally purchased. Local Armenians have voluntarily occupied someone else’s house and are striving to “drive out” Georgian nuns for as long as 9 years.

Georgians are not entitled to the house they bought on their Georgian land because the Armenians do not like it and want to live in someone else’s house! Meanwhile, other Armenians in Abkhazia were driving up and killing their neighbors Georgians and seizing their homes as “trophies”. If, God forbid, Russia would then support the separatism of Armenians in Samtskhe-Javkheti, one would have no doubt that the Armenian Christian brothers and the Georgian nuns would have been brutally murdered.

Indeed, one can only wonder at the Christian humility and meekness of the Patriarch of Georgia and Georgian nuns. But as experience shows, the Armenian nationalists do not appreciate the Christian attitude towards themselves. They perceive it as “weakness” and become impudent without any measure.

David Vartumashvili also reports that “The Church of St. Nino, which houses the monastery, is a monument of Georgian architecture of the XI century. For the epoch when huge Great Chairs were erected in Georgia, including Svetitskhoveli in Mtskheta and Alaverdi in Kakheti, neat little Poki basilica looks poor. This probably indicates the small number of the local population at that time. By the time the patriarch acquired the house next door, the church no longer had a roof. It was possible to restore it by 2002. The decor on the south facade has been preserved, fragments of wall paintings made by Asomtavruli, an old Georgian letter, have survived. The two inscriptions mention the Catholicos John V of Okropiri (Chrysostom), who was the ktetor of monastery, and to the right of the door - the builder of the temple “Master Bavrely”.

It turns out, the Armenian nationalists gave the church to the Patriarch without a roof. And even 9 (!) Years prevented the restoration and renovation of the monastery. And the ancient Georgian church, which was in a much better condition, with a roof, was adapted for a hayloft. Knowing very well that Georgian priests, nuns and pilgrims have nowhere to pray.

Well,okay, you captured a foreign church. But then why don’t you pray in it yourself! Why do you blaspheme, why do you make the hayloft from a holy place (if not a cattle shed!)!?

But no! Local Armenians find the church as the Temple of God is absolutely not needed. They converted it into a hayloft solely in order not to give it to their rightful owners, the Georgians. It is this “friendship and brotherhood of nations” that we recall is happening not in occupied Abkhazia, but almost in the spiritual heart of Georgia, the sacred place for the whole country, from which the spread of Christianity throughout Georgia began.

The blasphemy of Armenian settlers over Georgian shrines should be immediately stopped. The ancient church in the village of Poka, in which they set up a hayloft and a cattle barn, must be handed over to the Georgian Orthodox Church and re-consecrated in order to resume worship here.