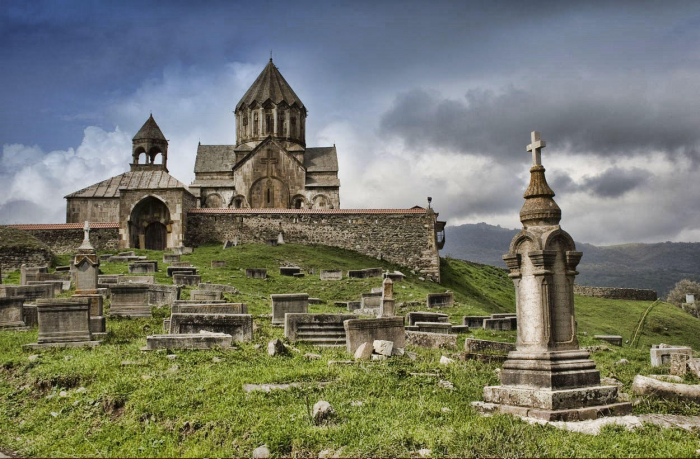 As you know, the ancient independent Albanian Catholicosate was illegally and anticanonically attached to the Armenian church organization of Echmiadzin in 1815, receiving only the status of "metropolitanate", and after 1830 it was abolished altogether.

Albanian Catholicos Sergius II Hasan-Jalal resisted this by all available means, but he could not do anything. Indeed, by that time, all the territories where his flock lived (Karabakh, Sheki, Shirvan, Guba, Baku, Ganja, Derbent khanates) were under the full authority of the Russian Empire. Although Echmiadzin, to whom it was illegally subordinated, was located on the territory of the Iravan Khanate, which was not controlled by Russia until 1827.

Armenian falsifiers falsely assert that the Albanian Catholicosate, they say, "from time immemorial" was only, in fact, an autonomous structure of Echmiadzin, in everything it obeyed and was "a purely Armenian church."

However, the facts show something else entirely. Before the resettlement of Armenians to the South Caucasus, which was organized by the Russian Empire, the parishioners of the independent Albanian Catholicosate (even under the last Catholicos Sergius II) generally did not speak the Armenian dialect at all. They spoke Turkic, Udi, and Tat. The Armenian-Gregorian (Monophysite) had only a religion and the time when it began to prevail in the Albanian Catholicosate needs additional research and clarification since there is evidence that as early as the 12-13th centuries Albanian Catholicos was inclined towards the Orthodox faith.

The fact that the divine service in the Albanian Catholicosate was gradually translated into the ancient Armenian language of Grabar, which was also incomprehensible to most of the representatives of the Khai ethnic group, does not mean anything. There was a concept of “sacred languages”. After the Albanian Catholicosate managed to "seduce" into the Armenian-Gregorian heresy (from the point of view of Orthodoxy), the grabar became the language of worship. The same parishes of the Albanian Church that remained Orthodox (in Kakheti, for example) switched to divine services in another sacred language - Georgian.

In principle, the "dual power" in the Albanian Catholicosate did not arise by chance and was associated with the intrigues and attempts of Echmiadzin to extend his power to the Albanian Church. Moreover, those Albanian Catholicos whom Armenian historiography calls "anti-Catalikos" according to all historical information that has come down to us should have been recognized as the true Catholicos who defend the independence of the Albanian Church from the encroachments of Echmiadzin, which by that time had already come under the influence of the Vatican. It was then that the planting among the Armenian-Gregorians, constructed with the help of the Vatican on the island of St. Lazarus in Venice, the myths about "Great Armenia" began.

The first Albanian "anti-Catholicos" is Simeon IV, elected with the consent of Shah Sefi II from the Safavid dynasty. His real story is not well known. According to Armenian sources, in the second half of the 17th century, the Albanian priest Simon from Khotorashen founded the monastery of Erek Mankuk in one of the gorges of the Murovdag mountains. As the Albanian Catholicos's election was supported by some influential Christian families of Karabakh, dissatisfied with the hereditary control over Gandzasar of the Hasan-Jelal clan, and the fact that Hasan-Jalal did not sufficiently resist the strengthening of Echmiadzin's influence.

By that time, the Safavid empire was on the decline and a struggle was already unfolding for its "legacy" between various geopolitical forces. It is clear that the Albanian Catholicosate, as a large ancient Christian community, was a very valuable "prize" for external forces. Therefore, Echmiadzin, which was already under Jesuit influence, began more and more persistent attempts to subjugate the Albanian Catholicosate.

At the same time, the Safavids, and later the independent Azerbaijani khans, were more interested in the fact that their Christian subjects retained the church structure completely independent of external influence. Therefore, while the Safavid Empire existed, it was more inclined to support the Albanian Catholicos from Erek Mankuk (both Simeon IV and Nerses V, who became Catholicos in 1706). Although at the same time the Safavids did not take any action against the Catholicos of Gandzasar, preferring not to interfere in the "intra-Christian showdown."

Meanwhile, with the weakening of the Safavids, Gandzasar clearly began to intrigue against them. The same Catholicos Yesai Hasan-Jalal began a correspondence with Peter the Great "bypassing" his legitimate sovereign, the Safavid Shah Soltan Hussein.

True, Soltan Hussein by that time was failing in the war with the Afghans. It was obvious that the Safavid empire could collapse at any moment. From this point of view, it is not known how to characterize the actions of the Catholicos Ganzasar - did he “betray” or “foresee”? But in return for his "pro-Russian position", Hasan-Jalal wanted to get full control over the Armenian parishes in the Russian Empire, which Echmiadzin also claimed.

The struggle between Gandzasar and Echmiadzin for the "rich Russian Armenians" has escalated. But at the same time, paradoxically, there was a growth of Armenian influence in the Albanian Catholicosate, which had specific "economic" reasons.

It is clear that the Albanian Catholicos in their correspondence with the Russian sovereigns called themselves “Armenians” primarily in order to substantiate the “legitimacy” of their claims to the richest Armenian-Gregorian communities in Russia from the “ethnic” point of view. Although these "Armenians" for the most part were descendants of the Armenian-Kipchaks, the Russian emperors did not delve into such subtleties.

Doing everything so that as many rich Armenian merchants as possible would recognize the "spiritual leadership" of the Albanian Catholicos, and not Echmiadzin, the Catholicos of Gandzasar began to position themselves in Russia exactly as "Armenian".

In fact, having betrayed the Safavids and promising to transfer to "Russian citizenship", the Albanian Gandzasar Catholicos Yesai Hasan-Jalal had the goal, not so much of "the liberation of Armenia" (as the Armenian falsifiers now write). He wanted more to withdraw from the expansion of Echmiadzin and to subjugate the Armenians and Armenian-Kipchaks living in Russia. And he, in the end, managed to enlist the support of St. Petersburg in this. As a result, the Armenian-Gregorians living in Astrakhan and other cities of Russia came under the control of the Catholicos Gandzasar.

Having sharply strengthened and got rich at the expense of the Russian Armenians, the Catholicos of Ganzasar were able to solve the problem of “dual power” in the Albanian Catholicosate itself. Poor "anti-Catholicos" from Erek Mankuk began to lose their influence and eventually resigned themselves to submission to Gandzasar. The center of resistance to Armenization in the Albanian Catholicosate was in fact liquidated.

However, in the second half of the 18th century, there was an increase in the influence of Echmiadzin in the Russian imperial court. It coincided with the expansion of the Russian Empire to the lands of the Commonwealth and the Crimean Khanate with the transfer of a mass of local Armenians (also descendants of the Armenian-Kipchaks) into Russian citizenship. And among these Armenians, the influence of Gandzasar was minimal, in contrast to the influence of Echmiadzin. As a result, at the request of the Echmiadzin Catholicos Simeon Erevantsi, the Russian Empress Catherine II gave the Astrakhan and other Russian Armenians to subordination to him, and not to the Catholicos of Gandzasar.

The position of the Albanian Catholicosate, which had lost the "nourishment" of the rich Russian Armenians, was sharply shaken - the poor Udi, Albanian-Karabakh, and Tato-Christian peasants could not provide him with the previous level of income. On the contrary, Echmiadzin, who had become very rich, began to win over Russian officials and administrators with "money". Therefore, further absorption of Ganzasar by Echmiadzin became "a matter of time and technique."

In fact, the Catholicos of Gandzasar "looking after" the rich Armenian-Gregorian communities of Russia, and for their sake, in fact, betraying their longtime benefactors, the Safavids, "signed a death sentence" to the independent Albanian Catholicosate.

By the way, this makes it clear why the Azerbaijani Iravan Khanate was in fact doomed. After all, inside it was operating a "fifth column" with colossal financial resources, hostile to the Qajars dynasty and oriented toward the Russian Empire, hostile to the Qajars. That is, all information about the weaknesses of the khanate, as well as all the intrigues aimed at weakening it (including bribery of individual rulers), went through the Echmiadzin Catholicosate. "In gratitude" for such a treacherous policy, Echmiadzin was promised control over the Albanian Catholicosat, which weakened significantly after the wealthy Armenians in Astrakhan and on the territory of the Russian Empire were transferred from Gandzasar to Echmiadzin.

And after the capture of Iravan by Paskevich, the final annexation of Iravan and Echmiadzin to the Russian Empire, even the “last mention” of the independent Albanian church was illegally liquidated. All these archives were transferred to Echmiadzin and everything that did not fit into Armenian nationalist myths was destroyed.

Naturally, such a strengthening of the Armenian church organization, absolutely independent of the Russian emperors and subordinate to the influence of the Vatican, was completely unprofitable for the Russian Empire. And the future surge of Armenian nationalism and terrorism will clearly show this.