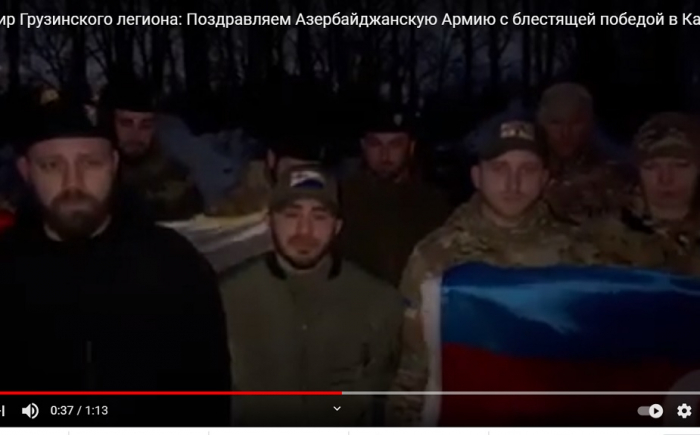 Mamuka Mamulashvili, the commander of the Georgian Legion, who fights as part of the Armed Forces of Ukraine for the territorial integrity of Ukraine, congratulated Azerbaijan, the Azerbaijani people, and the Azerbaijani Army on the New Year and a brilliant victory over the Armenian occupants in Karabakh:

Congratulations from the commander of the "Georgian Legion" to Azerbaijan is a very significant moment. Recall that the irreconcilable fighter against separatism Mamuka Mamulashvili in Ukraine was awarded the Order of the People's Hero, the Cross of Ivan Mazepa, and the medal for sacrifice and love for Ukraine. At the same time, the commander of the "Georgian Legion" Mamuka Mamulashvili has repeatedly publicly supported the territorial integrity of Azerbaijan and the immediate and unconditional de-occupation of Karabakh and its return to Azerbaijan.

As you know, the first separatist conflict in the post-Soviet space was Azerbaijani Karabakh, whose joining to Armenia was illegally demanded by Armenian nationalists. It is safe to say that if it were not for the Armenian nationalists and the Armenian lobby under the Soviet central government, who initially began to incite separatism everywhere and create precedents for redrawing borders everywhere, then most wars in the space of the former USSR would never have begun.

Separatism, wherever possible, was initially fomented by the Armenian lobby and Armenian nationalists in parallel with the demands of the “miatsum” of Karabakh. There are a lot of documents and historical data about this. And the recognition of the so-called. separatist "Artsakh" of fake "independence" of Abkhazia, and the so-called "South Ossetia" (long before the Russian occupying these Georgian regions did it in 2008) is the most eloquent confirmation of this. Likewise, the Armenian lobby once stirred up the conflict in Moldovan Transnistria, and the Armenian separatist "Artsakh", created in the occupied Azerbaijani territories, also recognized the "independence" of Transnistria.

However, by far the bloodiest armed separatist conflict in the post-Soviet space was the war in eastern Ukraine in the Donbas, which was fueled in 2014 after the annexation of Crimea. And in the preparation of this annexation, the Armenian nationalists and the same "Artsakh" were not without.

Suffice it to recall that for many years separatism on the Crimean peninsula with demands to annex it from Ukraine to the Russian Federation was methodically incited by such a figure as Anushevan Danilyan, who served as vice-speaker of the parliament of the Crimean Autonomous Republic within Ukraine. When Ukrainian law enforcement agencies took up Danilyan, this separatist fled from the Crimean peninsula and almost immediately "emerged" in the occupied Azerbaijani territories, becoming the "prime minister" of the separatist "Artsakh" (to which he had nothing to do at all! He was born in Georgia (in the Bolnisi region, lived in Armenia and Ukraine) But the separatists raised by Danilyan and supported by the Armenian lobby remained in Crimea and waited until 2014.

Is it necessary after this to prove that both the tragedy of Ukraine and the tragedy of Azerbaijan, connected with separatism, were coordinated from a single center by Armenian nationalists? As well as the tragedy of Georgia - in Abkhazia and the Tskhinvali region.

At the same time, the role of the Armenian lobby is visible in the war in eastern Ukraine with the naked eye, if only because the separatists of Donbas from the Kremlin were supervised by the curator of the separatists of Sukhumi and Tskhinvali, associated with the Armenian lobby Vladislav Surkov. And the key role in the Crimean crisis, in the annexation of Crimea and in separatism in Donbas was played by the Armenian nationalist Sergei Lavrov-Kalantarov, the same one who insisted in 2008 on the recognition of the so-called. "Independence" of separatist Abkhazia and the so-called. "South Ossetia".

The main source of the infection of separatism was not only in the Kremlin (where the role of the Armenian lobby is enormous) but also in Yerevan and in the separatist so-called. Artsakh. Both the patriots of Georgia and the patriots of Ukraine, who today oppose separatism, such as Mamuka Mamulashvili, understand this perfectly.

If it were not for the “Artsakh” precedent and the plans of the Armenian lobby to create other contenders in order to legitimize the annexation of the Azerbaijani lands of Karabakh, then the Georgians, Ossetians, Abkhazians would have lived as fraternal peoples as they had lived for centuries. Not to mention the fact that nothing would threaten the peace in Donbas, where, in fact, one nation also lives. And today, in the same Donbas, a bloody massacre was unleashed between the fraternal Ukrainian and Russian peoples, during which tens of thousands of people died. The "front line" literally went through families (this means that the separatism initiated by the Armenian lobby cost the most victims of the allegedly "allied" Armenia Russia).

Therefore, the congratulations of Azerbaijan on the victory of the Georgian patriot, who is currently fighting in the east of Ukraine for both Ukraine and Georgia, against the misanthropic separatist ideology and pseudo-formations that have disfigured the lives of millions of people and led to tragedies for entire nations, is very symbolic.

Azerbaijan today is at the forefront of the fight against separatism and has become, in fact, the first winner of separatism in the post-Soviet space.

Therefore, both Georgia and Ukraine unconditionally support and will support Azerbaijan. Moreover, the cooperation of these countries is aimed at the future. After all, joint projects with Azerbaijan promise colossal prospects for the economic development of both Ukraine and Georgia, especially when separatism will inevitably end.