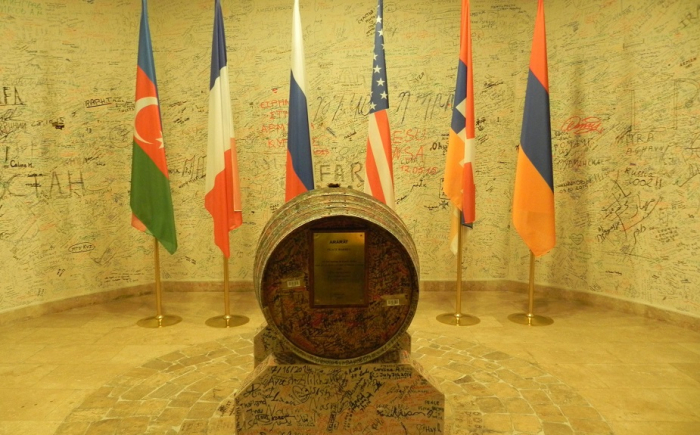 On the territory of the famous Yerevan brandy factory "ARARAT", there is a historical-museum complex, where samples of brandies and brandy spirits are exhibited. This museum also has a special corner where the so-called "A barrel of peace" in honor of the visit of the OSCE Minsk Group co-chairs to the Yerevan Brandy Factory in 2001. According to the initial agreement, the "barrel of peace" was to be opened on the day when the Karabakh conflict is resolved...

This barrel contains alcohol of 1994, which symbolizes the date of the signing of the first truce in the Karabakh conflict after the end of the first Karabakh war. After that, many years of occupation of the Azerbaijani lands by the Armenian army dragged on.

When the Armenian side "laid" this barrel, it probably assumed that the occupation of Azerbaijani lands by Armenia would be almost eternal. Indeed, the “barrel of peace” was laid after the landmark 1999 terrorist attack in the Armenian parliament, when terrorists shot the leaders of the Republic of Armenia, with whom the issue of starting the de-occupation of Karabakh was agreed upon.

After that, a hopeless “dragging on time” and “marking time” began - the Armenian side made it clear in every possible way that it wanted to preserve the endlessly occupied “status quo” of Azerbaijani territories. It is also no coincidence, in violation of all international protocols, next to the flags of the OSCE Group members at the Yerevan Brandy Factory, near the barrel, to place a separatist rag - the “flag” of the so-called “Artsakh”.

But in the fall of 2020, during the Liberation War by the Azerbaijani army, the occupiers were expelled from the Azerbaijani lands and the separatist "Artsakh" was actually liquidated. The Karabakh conflict has been resolved. The time has come to remove the Artsakh separatist flag as a symbol of this conflict from all sorts of corners and expositions. And, of course, it's time to open and drink the "Barrel of Peace".

It should be especially emphasized that the Karabakh conflict was resolved by the Azerbaijani army. And the OSCE Minsk Group over the years did not contribute to the fulfillment of its task - a peaceful settlement of the conflict (although there were a lot of chances, and formulas for de-occupation were prepared and even agreed upon). But this is already an insignificant question.

The opening of the "barrel of peace" may symbolize the fact that Armenia once and for all renounces claims to the lands of neighboring states. This is necessary, first of all, for the Armenian people themselves, which only by normalizing relations with neighbors gets a chance to develop their state within internationally recognized borders.