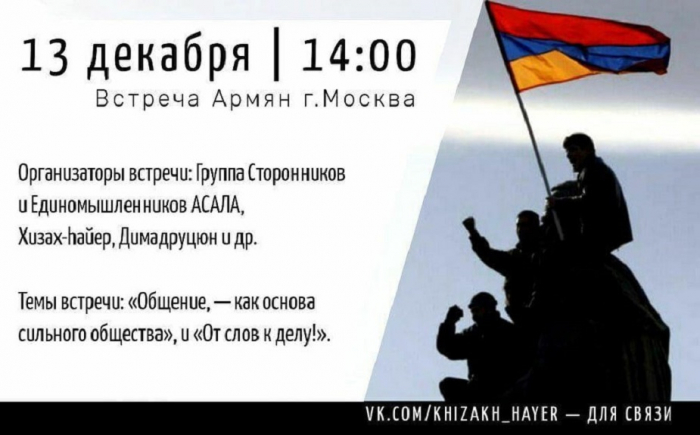 The complete defeat of the Armenian invaders and the end of the occupation of Azerbaijani Karabakh, unfortunately, did not particularly change the nature of the Armenian propaganda in the Russian Federation. Here, as before, both Armenian nationalism and its most terrible manifestations, Armenian terrorism, are heroized. In light of this, the event held in Moscow, where such a terrorist organization as ASALA was promoted, cannot be considered otherwise than a provocation.

On December 13 at 14:00, the so-called "Meeting of the Armenians of Moscow" was organized. The organizers of the meeting were terrorist and extremist organizations: "Group of Supporters and Associates of ASALA", "Khizakh-Hayer," Dimadrutsun.

The meeting was organized through social networks and was not promoted especially among non-Armenians, outsiders were not invited to the meeting. Nothing has been reported about the outcome of the meeting either.

Those. in fact, a meeting of Armenian terrorists took place in Moscow. Officially announced topics of the meeting: "Communication as the basis of a strong society", and "From words to deeds!" If we take into account that the meeting was organized in fact by the ASALA terrorists, then "from words to deeds" sounds ominous - this is nothing more than a veiled call for terrorist attacks.

By analogy, with the same success, ISIS could organize its own "meeting" in Moscow and propagate its ideas. Moreover, when ISIS was not even "in the project" yet, ASALA was already carrying out its bloody terrorist attacks.

In fact, the propaganda of terrorism in Moscow and the fact that terrorists in the Russian capital hold their meetings almost without hiding are a very alarming symptom. Having failed to oppose anything to the Azerbaijani army on the battlefield, the Armenian nationalists are highly likely to launch a campaign of terror in the near future. And not only against Azerbaijan and Turkey, but quite possibly against Russia.

The fact is that threats and ultimatums are already being heard against Russian corporations cooperating with Azerbaijan and Turkey. There are threats against Russian politicians, political scientists, journalists and public figures who have taken a balanced position on the Karabakh conflict.

People who do not even sympathize with Azerbaijan at all, but who had the courage to declare that Karabakh is an internationally recognized Azerbaijani territory, or that the information disseminated by the Armenian media, allegedly "desecration of Armenian monuments" is fake, automatically gets the label "enemies of the Armenian people. ". A campaign of harassment and mental pressure begins against them.

It has cost dearly to underestimate the dangers of Armenian terrorism for Russian (and Soviet at one time) law enforcement agencies. Suffice it to recall that the first high-profile terrorist attack in Moscow - the explosion in the metro and near shopping centers in 1977 was organized by Armenian terrorists.

This was long before the Karabakh conflict and before the collapse of the USSR, however, the Armenian nationalists already had hatred for Russia and the Russians then.

Not in the distant future, obviously, there will be provocations and acts of terrorism both against the Russian military in the Republic of Armenia and in the Azerbaijani territories of Karabakh, and against those who disagree with the Armenian lobby, Russian politicians and public figures, in Russia itself.