The puppet "President of Abkhazia" congratulated the "owner", Ruben Tatulyan, on his 50th birthday 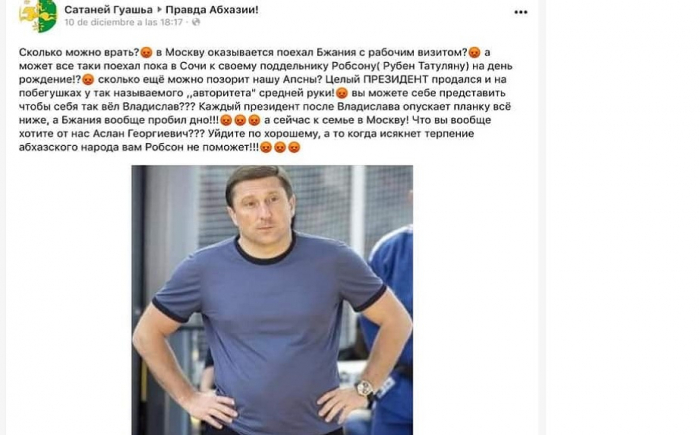 The recent "visit" of the so-called puppet “President of Abkhazia” Aslan Bzhania to Moscow on December 11 looked rather strange. If only because there were no special reasons for the separatist puppet to travel to Moscow after on November 12, at a meeting with Vladimir Putin in Sochi, he received a “task” to prepare for the annexation of separatist Abkhazia by Russia.

In addition, Aslan Bzhania did not meet at all with officials of the "federal" level, but with municipal officials in Moscow. In particular, he met with the ministers of the Moscow government, the head of the department of foreign economic and international relations of Moscow, Sergei Cheremin, and the director of the Moscow House of Compatriots, Pyotr Gladkov.

Topics were also discussed, as if not directly related to the modern separatist Abkhazia, which faces the issue of an energy crisis. In particular, they discussed a certain possibility of using the experience of the Safe City program, which is being implemented in Moscow. It is not entirely clear how the experience of using the program can be introduced in a huge metropolis, in poverty-stricken and “rural” Abkhazia.

It was interesting that the meeting raised the issue of the Moscow government's assistance in opening a branch of a multifunctional center in Abkhazia for Russian citizens permanently residing in Abkhazia, which would make it easier for them to draw up the necessary documents.

This issue is relevant because citizens of the Russian Federation of Armenian nationality are really preparing to settle in Abkhazia and they will need to quickly prepare documents for the ownership of Abkhaz land and real estate. However, apart from this, there were no special reasons for Aslan Bzhania to travel through Sochi to Moscow on December 10-11.

But if we take into account that the trip to Moscow was undertaken "to divert one's eyes" from a much more important meeting for Aslan Bzhania directly in Sochi, then everything falls into place.

The fact is that on December 10, 2020, the unofficial “owner” of Aslan Bzhania, the criminal “owner” of Sochi and, in fact, the chief “curator” of the current settlement of Abkhazia by Armenians Ruben Tatulyan, celebrated his 50th birthday.

The puppet Bzhania on such a day simply could not help but bring his congratulations and express personally the signs of “his devotion” to the “owner”.

Aslan Bzhania prepared a "gift" for Ruben Tatulyan very expensive - all of Abkhazia, with land, real estate, resources. In fact, at least 20 thousand “Artsakh” Armenians have settled in Abkhazia with the participation of the same Tatulyan. And in the near future, the process should become more intense.

The Abkhaz patriots themselves are trying to sound the alarm, but they are sharply "gagged". In particular, in social networks, during the trip of Asan Bzhania to the Russian Federation, a post was published by a certain Satanei Gouache in the group "Truth of Abkhazia!" After some time he was "wiped" by this user. Apparently, the Abkhaz was intimidated so that he "did not write too much." But the screenshots of the post were preserved. Here is its content:

“How much can you lie? Is Bzhania on a working visit to Moscow? Or maybe he still went to Sochi to see his fake Robson (Ruben Tatulyan) for his birthday. How much more can shame our Apsny? A whole PRESIDENT sold out and ran errands from the so-called "authority" of the middle hand! Can you imagine Vladislav behaving this way ??? Each president after Vladislav lowers the bar lower and lower, and Bzhania has broken the bottom! And now to the family in Moscow! What do you want from us Aslan Georgievich ??? Leave on good, otherwise when the patience of the Abkhaz people runs out, Robson will not help you !!! "

Apparently Robson's people took up the "impatient" Abkhazians and complained to them "to be quiet." And after that, there is “silence” on the Abkhaz social networks. More precisely, there you can scold the Georgians as much as you like - this is welcomed by the Armenian "patrons" in every possible way. But try to say at least one word against the Armenian "masters" who have the "president" of the separatist Abkhazia himself "running errands"! It will be more expensive for yourself ..

When will Abkhazians come to their senses? There are no chances to stop the quiet but inevitable "Armenian invasion" on their land without reconciliation with the brotherly Georgian people and are not foreseen.