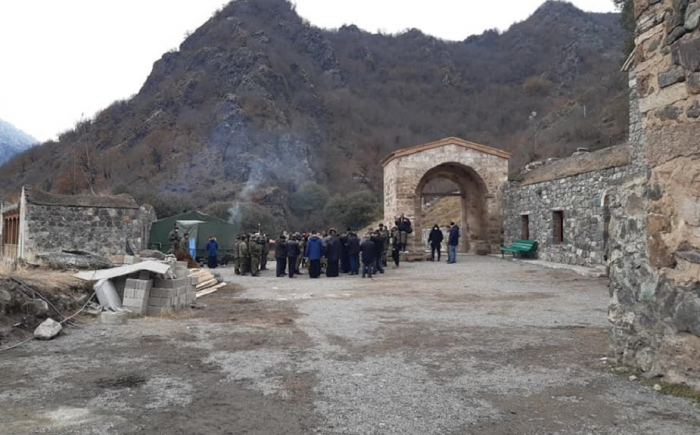 Long years after the capture and desecration, the Christian shrines of Karabakh ended up with their true owners - the Orthodox people of Azerbaijan. The Albanian-Udi community held the first prayers in the ancient Albanian monastery Khudaveng (Dadivank), liberated from the Armenian occupation.

It is very important that it was Orthodox people who prayed. That is, the Orthodox shrine was returned to the Orthodox Church. The complete restoration of the Albanian Church, of course, will not be a one-day process. Priests should be trained, and in the long term also bishops from the Albanian-Udi community.

But for all Orthodox people: Udins, Georgians, Ukrainians, Russians, it is important that if earlier the Orthodox, according to the canons, could not visit and pray in the Orthodox monastery of Khudaveng (Dadivank) seized and desecrated by heretics by Armenians, now he can join the most ancient Christian Orthodox shrines...

The process of liberating Orthodox shrines that are under Armenian occupation has not yet been completed. First of all, this concerns the Albanian and Georgian temples located in the north and northwest of the present Republic of Armenia.

The Azerbaijani enclaves of the Gazakh region must be liberated from the Armenian occupation and the indigenous people, Azerbaijanis, must return here. It is clear that there is still a question of organizing a corridor to these places. However, neither Georgia nor the Orthodox citizens of Azerbaijan should lose sight of the facts of desecration of Orthodox shrines on the territory of the Republic of Armenia. Moreover, the sad state of these temples can be seen from the actual Armenian materials. Here, for example, is a video about the state of the ancient Orthodox monastery of Kirants:

It is also interesting that the Armenian falsifiers in every possible way keep silent about the real history of the "armenization" of the indigenous Orthodox Albanian and Georgian population, who lived in the territories that were historically part of Caucasian Albania. Meanwhile, it is obvious that linguistic Armenization here was preceded by a religious one, which took place through the seizure of the leadership of the autocephalous Albanian Church by Armenian heretics.

Deprived of the nourishment of the Orthodox Church, no desire to mix with the "Hay" newcomers, the indigenous Orthodox Albanians and Turks became Muslims and joined the united Azerbaijani people (this is, for example, the fate of the same Ayrum). Part of the Christian Albanians, even being converted to the Armenian-Gregorian faith, moved to Georgia and switched to the Georgian language. This is how, in principle, the “Armenians with their native Georgian language” mentioned in censuses and ethnic studies appeared in Kvemo Kartli, who for the most part today have returned to Georgian self-consciousness and Orthodoxy. Later, the second wave of the Armenianized Albanians arrived here from Karabakh. Their descendants still live in Kvemo-Kartli (Shularveri, Bolnis Khacheni, etc.).

Today there is a great need to fully expose the false conjectures of the Armenian falsifiers. Say, during the heyday of the Georgian kingdom during the times of David Agmashenebeli and Queen Tamar, the territories of present-day northern Armenia and Karabakh were allegedly ruled by “Armenians” and churches were founded here by “hays”. Suffice it to recall that in the heyday of the single Orthodox Georgian kingdom, the main thing was not ethnic origin, but religion. And a person of the "Armenian" faith, in principle, could not occupy a high post in the Georgian kingdom, which extended its power to a significant part of the Christian population of the former Caucasian Albania.

So, for example, the Georgian princely family Mkhargrdzeli (presumably of Kurdish or Parthian origin), whose representatives held the highest positions in the Georgian state hierarchy, had nothing to do with the Armenian ethnos. The fact that he was related to the Albanian and Albanian-Kipchak noble surnames of Karabakh (the same Hasan Jelals) and other regions of historical Albania and the fact that members of their families built the monasteries of Karabakh that have come down to us, such as Ganzasar and Khudavenge (Dadivank), suggests that they were all Orthodox. And the fact that in the numerous inscriptions remaining in Khudaveng (Dadivank) a number of such names as Arzu Khatun, Tursun, Seiti, Hasan, Avag, Shams, Altun, Aghbukh, Garagez and others are indicated is an eloquent indicator of the Turkic origin of the founders of Albanian Christian shrines.

All Christian churches in the northwest of present-day Armenia and the West of the Republic of Azerbaijan are nothing more than appropriated and Armenianized Albanian Orthodox churches. Moreover, those churches that failed to be armenized were deliberately destroyed and desecrated. This applies, in particular, to those churches and monasteries that, through the efforts and patronage of the Georgian kings, remained almost until the arrival of the Russian Empire in the Caucasus, patronizing the Armenians.

Since the falsification of Albanian Orthodox churches has gone too far, their real history has to be carefully studied. And those churches that could not be Armenianized and are now in a dilapidated and abandoned state on the territory of present-day Armenia must also, sooner or later, be restored.