100 years of the Treaty of Alexandropol - why doesn't Armenia celebrate? 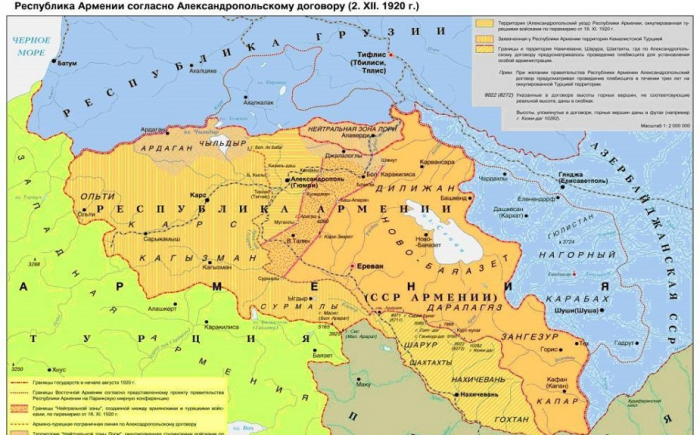 Armenian nationalists love to celebrate “round dates” associated with Armenian history, both real and mythical. And on December 3, 2020, they had a great occasion to remember their "great" history. And at the same time, the real borders of its state - the Republic of Armenia, to which, according to all historical justice, it had to return. Nevertheless, there were no "celebrations" in Yerevan on this occasion, moreover, Armenia is trying to "forget" this real international treaty.

The Treaty of Alexandropol was signed on the night from 2 to 3 December 1920 between the Dashnak Republic of Armenia and Turkey. Before that, the Dashnak Armenia voluntarily ceded to Georgia the previously neutral Lore (Lori) Zone - the former southern part of the Borchali district of the Tiflis province.

As a result, the Armenian state at the beginning of December 1920 returned to the "optimal" borders, which would have remained so, if not for the Bolsheviks, who later absolutely illegally and arbitrarily decided to expand the territory of Armenia at the expense of its neighbors.

Recall that the text of the Treaty of Alexandropol read as follows:

The war between Turkey and Armenia is declared over.

Turkey departs over 20 thousand square meters. km. territories of the Caucasian possessions of the former Russian Empire, including Kars, Sarykamysh, Ardahan, Olty, Surmalinsky district, Karkhzvan, Alexandropol (now Gyumri). In the regions of Nakhichevan, Sharur and Shahtakhty, a temporary protectorate of Turkey was declared; subsequently, a referendum should establish a special administration (since the vast majority of the population of these territories were Azerbaijanis, the outcome of the referendum was a foregone conclusion). Armenia was deprived of the right to interfere in the affairs of the Nakhichevan administration, no matter what form it took.

The indisputable historical, ethnic and legal ties of Turkey with the land transferred to it under this agreement were recognized.

Armenia was deprived of the right to have compulsory military service, the maximum number of its army was set at 1,500 people with 8 guns and 20 machine guns.

It was forbidden to return to their homes those refugees who left them during the world war and fought against their government. This primarily concerned those Armenian citizens of the Ottoman Empire, Dashnak militants and terrorists who betrayed their country in 1915 and participated in the genocide of the Muslim population.

The Turkish government refused to reimburse the costs of "the war it was forced to start."

Armenia recognized the Treaty of Sevres as annulled, and Armenian delegations were to be withdrawn from Europe and the United States. Armenia undertook the obligation "to remove from state administration all persons who provoked and pursued imperialist tasks." Armenia recognized as invalid all treaties that were concluded to the detriment of Turkey or affected its interests.

Turkey received the right to control the railways and other communication routes of Armenia, "take military measures" on the territory of Armenia and stop the movement of weapons if they exceed the above dimensions.
Trade and diplomatic ties were restored between Turkey and Armenia.

At the same time, the Treaty of Alexandropol, unlike the Treaty of Sevres, was not canceled and has full legal force. Especially when you consider that the present Republic of Armenia carries on its "legal succession" not from Soviet Armenia, but from the "First Armenian Republic, proclaimed in 1918.

True, due to the position of Soviet Russia, the Treaty of Alexandropol was somewhat "corrected" in favor of Armenia by the Moscow and Kars treaties concluded in 1921. However, since the Armenian nationalists want to annul these treaties, they will then have to return not to Sevres (which was annulled), but to the Treaty of Alexandropol. And give Gyumri to Turkey, and Lori to Georgia.