Armenian militants from Abkhazia are already afraid of responsibility: they have forgotten about "heroism" and claim that "they did not fire a single shot" 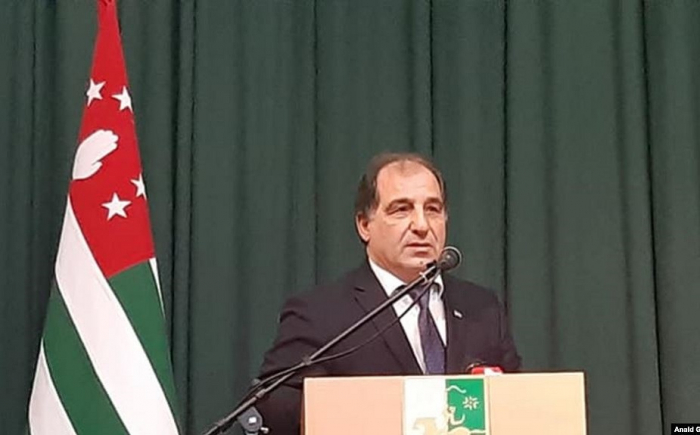 Amazing metamorphoses begin to occur with the Armenian nationalists as soon as it becomes clear to them that they will have to answer for their "exploits", participation in illegal separatist and terrorist groups, as well as mercenary activities. From “heroes” and “great warriors” they suddenly become “innocent peaceful sheep” who, they say, didn’t take weapons in their hands, and if they did, they didn’t shoot.

This is the kind of metamorphosis that happened to the Armenian militants from Abkhazia (including the Baghramyan battalion, notorious for its atrocities against the peaceful Georgian population). The very ones who, during the recent war in Karabakh, went to fight in the Azerbaijani territory on the side of the “Artsakh” separatists and Armenian invaders.

These militants were solemnly met by the leader of the "Artsakh" separatists Arayik Harutyunyan. The arrival of veterans of the separatist war with Georgia to the front in Karabakh was presented by the Armenian propaganda as "serious help" to the occupation forces, which suffered one defeat after another.

But neither the mercenary fighters from Abkhazia, nor the Armenian terrorists from Syria, Lebanon and other countries thrown by the Pashinyan regime in Karabakh in order to hold the front did not help. After the liberation of Shushi, it became clear that the position of the Armenian occupation group in Karabakh was hopeless.

As a result, on the night of November 9-10, Armenia signed a surrender. Under the terms of surrender, the notorious "status" of "Artsakh" or "Nagorno-Karabakh" is not mentioned anywhere.

Those. with one separatist entity in the South Caucasus, in fact, is already done. This means that very soon the turn will come for other separatist formations, first of all, the puppet regimes in Sukhumi and Tskhinvali.

And here it is very interesting to look at the abruptly changed position of the main representative of the Armenian lobby in the separatist power in Sukhumi, Galust Trapizonyan. More recently, this former company commander of the battalion them. Baghramyan spoke on any occasion about the "heroism" of the Armenians of Abkhazia in the war with Georgia and the fact that they were ready to "fight for Artsakh." And he sent his militants to Karabakh as "heroes" to fight against Azerbaijan.

It would seem that now the militants have returned back to Abkhazia (they are really afraid of staying in Karabakh. They, as mercenaries, are not covered by the security guarantees that the Azerbaijani authorities give to the peaceful Armenian population of Karabakh). It's time to tell about their "exploits".

But there is nothing like that. Galust Trapizonyan abruptly "forgot" about the "heroism" of the Abkhaz Armenians. An excerpt from the material published on the Echo Kavkaz website “Galust Trapizonyan:“ They just arrived, they didn’t fire a single shot ”(https://www.ekhokavkaza.com/a/30970674.html?fbclid=IwAR0vacHscvkk7lzOVT2yC3rRiFqov1E4Zn5).

“On November 12, the Prosecutor General's Office of the Republic of Azerbaijan announced the initiation of a criminal case over the dispatch of volunteers from Abkhazia to Nagorno-Karabakh. The press release states that a group of people “living on the territory of Abkhazia in Georgia” committed crimes against Azerbaijan. The text says:

“Investigations have established that in October 2020, Seyran Kodjamanyan, Galust Trapizonyan and others living in Abkhazia mobilized a group of more than 20 people who held a meeting with the leadership of the fictitious Nagorno-Karabakh regime, where they discussed participation in military operations. The aforementioned members of the criminal community, having arrived in Armenia with the support of the relevant state structures, having entered into a criminal relationship with persons in the occupied territories of Azerbaijan, and united with them in a criminal group, illegally crossed the internationally recognized state border of Azerbaijan without the necessary documents, outside the control and checkpoints, that is, through Armenia, and entered the territory of the city of Khankendi and other occupied territories. It was found that they were used by the military-political regime of Armenia as mercenaries against the civilian population and participating in the anti-terrorist operations of the armed forces of Azerbaijan ... Members of the criminal community, using ammunition, military equipment, committed in a particularly cruel and generally dangerous way numerous crimes against civilians who did not participate in military operations, with the intention of ethnic enmity, committing explosions, fires or other actions that pose a threat of socially dangerous consequences, participated in terrorist activities against the citizens of Azerbaijan."

The criminal case was initiated under several articles of the Criminal Code of Azerbaijan, providing, in particular, with imprisonment for a term of 14 to 20 years or life imprisonment. The investigation was entrusted to the Investigation Department of the General Prosecutor's Office.

Echo of the Caucasus contacted the chairman of the Armenian community of Abkhazia, Hero of Abkhazia Galust Trapizonyan. To the first question - about the fate of twenty volunteers from Abkhazia - he answered:

“Everyone returned. It's okay. Everyone is safe and sound, so ... They stayed in Stepanakert, just (on the last day) moved to a crossroads ... There is a crossroads between Stepanakert and Shushi, and they moved there. And there and then the retreat was given.

- How would you comment on the fact that law enforcement agencies in Azerbaijan have opened a criminal case against you and the commander of this detachment?

- What do I say? (Laughs) This is not news to me. The Georgians also applied to Interpol regarding me, so I am not allowed to leave anywhere. Now they are Azerbaijanis. I don’t know who will be next ...

- And there, most importantly, such formulations - "committed numerous crimes against civilians ... explosions, fires" ... And they never even had time to join the battle?

“Yes, they just arrived, they didn't fire a single shot.”

All clear. Armenian militants are already trite to fear responsibility for their crimes. Galust Trapizonyan is also afraid of her, his hands are covered in blood of the killed peaceful Georgians of Abkhazia. And their fears are well founded.

The separatist regime in Sukhumi is doomed. Sooner or later Abkhazia will become an integral part of Georgia. Where then to go to the executioners "Baghramyanovtsy"? To Russia?

Russia extradited Talysh separatist Fakhraddlin Aboszoda at the request of Azerbaijan. Realizing that the cause of his "sponsors", the Armenian "Artsakh" separatists, was hopelessly lost, this traitor to his people committed suicide on November 9, 2020.

So the same authorities may well extradite Galust Trapizonyan and other mercenary militants to Russia either at the request of Azerbaijan or at the request of Georgia. Separatists and terrorists guilty of crimes against humanity cannot escape responsibility for their atrocities.