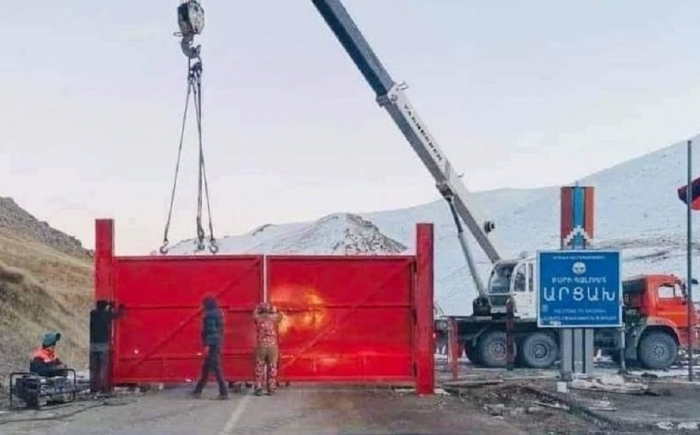 “Kavkaz Plus” has already written about the fact that the Armenian occupiers for many years brazenly plundered the natural resources of the occupied territories of Azerbaijan in the article “Long-term robbery of Azerbaijani subsoil on an especially large scale” (http://kavkazplus.com/news.php?id=477#.X75OVVUzbIU). At the same time, the main accomplice in the robbery and looting was the GeoProMining Gold company (the owner is the Russian GeoProMining).

"GeoProMining Gold" illegally developed a gold deposit in Zodsk (Seyudlu) located in the Kalbajar region of Azerbaijan, which until November 25, 2020 was under Armenian occupation. Also "GeoProMining Gold" owned the Ararat gold mining factory, where the gold ore plundered on the Azerbaijani territory was exported.

It should be reminded that Azerbaijan signed a contract for the development of gold deposits with the RV Investment Group Services LLS company on August 21, 1997 (51% - the Azerbaijani side, 49% - the American side), which also covers 3 fields under occupation: Zodskoye (Seyudlu) in Kelbajar region and also "Gyzylbulag" and "Vezhneli") in Zangilan region.

Over the years, "R.V. Investment" has repeatedly notified "GeoProMining Gold" that any operation carried out in the occupied Azerbaijani territories in relation to the same Zod deposit may result in an international court and, accordingly, liability. The company also appealed through lawyers to the government of Armenia, as well as to the UN, USA, Canada and Great Britain with a demand to stop work in the occupied territories. But the appeals remained unanswered...

The robbery by the invaders and GeoProMining Gold was suddenly stopped. The Azerbaijani army launched a counteroffensive on September 27, 2020, and on the same day, according to the head of "GeoProMining Gold" Ruzanna Grigoryan, work both at the mine and at the enterprise was completely suspended. It was also announced that the work "will not be resumed until while there is a threat of shelling this territory."

At the same time, the invaders and marauders from GeoProMining Gold tried to keep in their hands foreign lands with their resources. The Turkish edition “Yeni Şafak” wrote about this in particular at the height of the second Karabakh war (when the catastrophic defeat of the Armenian occupation army was not yet obvious to everyone).

“With the beginning of Azerbaijan's return to its control of the occupied territories, where gold reserves exceed 112 tons, the Russian company GeoProMining Gold, which accounts for 99% of gold production in the region, fell into a great panic. Not wanting to lose billions of dollars from gold mining, the company began stockpiling weapons and transferring mercenaries to the region, ”the newspaper said.

Back in October 2020, GeoProMining Gold, which has been developing deposits of precious metals in the occupied Kalbajar region for many years, not wanting to give up billions in revenues, according to the newspaper, tried to “prevent the complete de-occupation of the region, accumulating a large number of weapons and mercenaries there”.

“The company, which has earned billions of dollars in gold mining on lands belonging to Azerbaijan for 27 years, will suffer huge losses, having lost gold deposits in the occupied Kalbajar region. Moreover, this loss promises the company, with the name of which some representatives of the Armenian government are associated, complete bankruptcy, ”the article said.

The publication "Yeni валиafak" emphasized that after the complete liberation of the occupied territories, Azerbaijan can assess the damage from the illegal economic activity of Armenia, and initiate hundreds of criminal cases in international courts, including against operating companies, sue large compensation.

And on November 25, 2020, the looting of the Armenian invaders in relation to the Azerbaijani subsoil was put to an end. At the same time, the invaders in despair tried to keep the captured Azerbaijani mine by cunning.

Photos and videos of the "border closure" between the liberated Kelbajar region and the Vardenis region of Armenia were disseminated on the Internet and in the Armenian media. The Armenian side arbitrarily "moved" the border several hundred meters towards Azerbaijan and installed metal gates on the road, painting them red.

Thus, the Armenian invaders act “in their own repertoire”. Let us remind you that in the same way they brazenly "moved" the Armenian-Georgian border practically along its entire length. As a result, the ancient Georgian shrine, the Khujabi monastery, was illegally controlled by Armenia.

However, Azerbaijan has already warned the occupants that the place where they installed the gate is much further from the real state border between Azerbaijan and Armenia. Thus, the Armenian side deliberately tried to move the border deep into the territory of the Kelbajar region of Azerbaijan in order to appropriate the Zod gold mine. Attempts to move the border mean Armenia's violation of the trilateral agreement on November 9, which could lead to a renewal of the conflict.

However, the unauthorized red gates installed in the middle of the road, even if they are "supported" from the Armenian side by toilets taken from the Kalbajar region, will not help the Armenian invaders to keep the foreign land and its bowels. Azerbaijan takes control of the entire state border up to the line along which the border of the Azerbaijan SSR and the Armenian SSR previously passed.

baijan's return to its control of the occupied territories, where gold reserves exceed 112 tons, the Russian company GeoProMining Gold, which accounts for 99% of gold production in the region, fell into a great panic. Not wanting to lose billions of dollars from gold mining, the company began stockpiling weapons and transferring mercenaries to the region, ”the newspaper said.